From his early childhood in Bihar, India, where he was born in 1921, Shrii P.R. Sarkar has been attracting others by his deep love for humanity and guiding them along the path of self-realization. Adjusting the ancient science of Tantra Yoga to meet the needs of this age, he developed a scientific and rational philosophy and a system of practical disciplines for physical, mental and spiritual development. Recognizing him as a spiritually realized Master, his followers called him “Shrii Shrii Anandamurti” (which means “He who attracts others as the embodiment of bliss”) or simply “Baba” (father).

Those who followed his teachings found their lives transformed as they overcame the weakness and negative tendencies of the mind and experienced a deep peace and bliss within. Inspired by his selfless example, they turned their energies to serving the society and elevating the oppressed.

In 1955, while still leading a normal family life as a railway official, Shrii P.R. Sarkar formed the organization Ananda Marga (“The Path of Bliss”) and began training missionaries to spread his teachings of “self-realization and service to humanity” all over India and later throughout the world. Reflecting the broadness of his universal vision, Ananda Marga has become a multi-faceted organization with different branches dedicated to the upliftment of humanity through education, relief, welfare, the arts, ecology, intellectual renaissance, women’s emancipation, and humanistic economy.

Starting in 1963 he spearheaded an educational movement for all round development. This began with the introduction of the Education Relief and Welfare Section which grew to an international network of schools. In 1990 this work culminated in the founding of Ananda Marga Gurukula University, with its links to several hundred Master Units (self-reliant eco-village projects) throughout the world.

In the field of ecology and environmental awareness, Shrii P.R. Sarkar propounded the philosophy of Neohumanism, extending the spirit of humanism to include love for animals, plants and the inanimate world. He started a global plant exchange program to save and propagate thousands of plant species around the world. In conjunction with this he also started sanctuaries for animals in the various locations around the world.

In the realm of philology and linguistics, Shrii P.R. Sarkar wrote volumes on the Bengali and Sanskrit languages which still require years of deep scholarly study to be understood. These volumes trace the evolution of words, phrases and cultural traditions that comprise today’s tapestry of Indian languages as well as offering new and important insights into Indo-European and other languages of the world.

In the field of science, Shrii P.R. Sarkar introduced the theory of Microvita which subsequently has interested scientists around the world. In a series of discourses, Shrii P.R. Sarkar has struck at the heart of conventional physics and biology, as he points out that the basic buildings blocks of life are microvita — emanations of pure consciousness. The microvita theory provides a link between the worlds of perception and conception and implies that the distinct disciplines of physics, biology, and mathematics will merge into one science of understanding the real nature of the universe.

In the field of music, literature and art, Shrii P.R. Sarkar urged artists to create art for service and blessedness and not merely “art for art’s sake.” He wrote guidelines also for accomplishing this goal. Shrii P.R. Sarkar not only wrote long philosophical treatises, he has enriched us as well with children’s stories, fiction, comedy and drama. His most dramatic contribution is the 5018 songs known as Prabhat Samgiit (Songs of the New Dawn) which he started giving in 1982 until his departure on October 21st 1990. These beautiful songs express the universality of the human spiritual heart. Most of the songs were written in Shrii P.R. Sarkar’s mother tongue, Bengali. Bengali scholars have given the highest praise to these songs, in terms of their poetic and symbolic expression

For the collective welfare of the entire society, he propounded the theory of Prout (Progressive Utilization Theory), which stands for the maximum utilization and rational distribution of all the resources and potentialities of the world — physical, mental, and spiritual — and the creation of a new, humanistic social order of harmony and justice for all. His uncompromising moral stand against corruption and exploitation and his demand for social justice brought about the opposition of certain vested interests and the Communist Party of India and resulted in the persecution of Ananda Marga and his own arrest in 1971 under false charges. During his seven-year incarceration, he survived a poisoning attempt by jail officials and fasted on a glass of liquid for 5-1/2 years in protest. Ultimately acquitted of all charges by the High Court, he was released in 1978 and from then until his departure in 1990 he guided the rapid expansion of his mission all over the world. 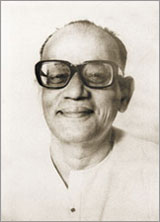 1964
Founded Ananda Marga Board of Education

Began the composition of Prabhat Samgiita (Songs of the New Dawn)

1986
Propounded the Theory of Microvita