“When the underlying spirit of humanism is extended to everything, animate and inanimate, in this universe – I have designated this as Neohumanism. This Neohumanism will elevate humanism to universalism, love for all created beings of this universe.”
– P. R. Sarkar

Simple ideas are often the most powerful. This is certainly the case with Neohumanism. Rooted in the ancient yogic perception that all existence is bound together, that we are all interconnected, Neohumanism transcends a limited and deeply wounded humanism with an holistic reconceptualisation of what it is to be human.

Neohumanism is a process of becoming consciously, self consciously, human. Essentially it is a term both general and specific, covering as it does all the ‘holisms’ that have sprung up in the humanities, sciences, and social movements in recent decades, while more specifically being a set of principles for living based on the ethic of universal love. As an ethical approach to life it has as its leading exponent the Indian philosopher, political activist and mystic, Prabhat Rainjan Sarkar. As such it is philosophical in form, revolutionary in spirit and spiritual in orientation.

Neohumanism offers a strong critique of nationalism, sexism, specism, capitalism and racism. As an ethical system its emphasis is on an integrated world view that urges us to embrace all experience of the phenomenal world reverentially. As a way of knowing it breaks the bounds of humanism, expanding what that arch humanist Vaclav Havel has called “the concept of human rights and liberties” to include the rights and liberties of the entire phenomenal world. As such it is part of the current reaction to the divisive and alienating effects of western rationalism.

It is however more than just a voice of dissent. Its strength and positivity comes from the fact that it places us as individuals in a world made meaningful by a renewed sense of our interconnection with everything. This is not simply a rhetorical interconnectedness, as we find in much holistic and new age writing. Neohumanism is a spiritual force because it acknowledges and actively promotes spiritual practice as the only way to achieve a sense of belonging in the universe. This sense of belonging cannot come from simple assertions that we belong: the rhetoric of belonging. Love, reverence and responsibility will not magically appear within us as transformative forces simply because we think they should. Nor will the authority to teach and guide others burst forth in our lives without some real effort being made to plumb the depths of ourselves in a contemplative and disciplined way. We cannot find salvation for this embattled world through reversion to simplistic atavistic formulas such as “God is everywhere.”

Basically, neohumanism is potent because it throws full responsibility for change onto us. Put simply, we have to change in order to promote change. As human beings we are bound to explore our own potentiality, to expand our understanding of who and why we are. This is the primary drive – it might be called the ‘prime directive’ – for us all as we chart our way through life. At the moment this prime directive is distorted as we are taught to compete with others for limited resources.

If we apply this prime directive with benevolence we find that every thing changes. We no longer need to compete with others, in fact our development as conscious beings is linked to our relationships. Our awareness of our interconnection with others enables us to harness the power of love as we turn from being self serving beings to beings of service.

What is more, because the sense of relationship expands as we take this step into inter-connectedness human beings no longer take center stage in the drama of existence. Consciousness itself becomes the chief protagonist in an epic that spans the ages since that initial spark, the point scientists call the big bang, when matter took form and began to unfold itself into the world we know today. From this perspective our relationships include both animate and inanimate existence and we are never alone, wedded as we are to all things.

Neohumanism describes the wonder of this drama and our role within it. It is critical of any thing that impedes our individual and collective journey through life. Because it is synthetic in character it allows for no distinction based on race, sex, caste, religion or even species. A Neohumanist agenda is a liberatory agenda. It places great store on human rationality as a tool in over turning all forms of dogma and prejudice. It links morality to this rational process in order to make the mind pure enough to function without bias, and the heart strong enough to embrace all in the endeavor to forge one single humanity. 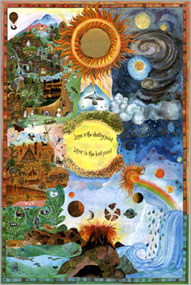 Reverence for all beings

Recognizing the interconnectedness of all life

Proper utilization of all resources

Rational thinking with the spirit of benevolence

Justice for all living beings

Art and science for service and blessedness