End Unemployment Now: How to Eliminate Joblessness, Debt and Poverty despite Congress

End Unemployment Now:
How to Eliminate Joblessness, Debt and Poverty despite Congress 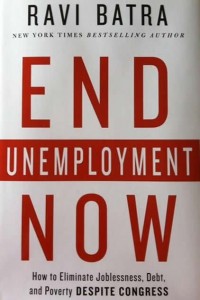 There was a time when occasionally individual corporations went bankrupt, but bankruptcy on the state level was not common. With Greece, Portugal, Spain, Ireland, Iceland and others facing financial troubles, it has now become common for nation-states to call for bailouts. Even the United States government faced a deadlock recently when the federal debt “skyrocketed from less than $10 trillion on the eve of President Obama’s historic victory in 2008 to $16 trillion in 2012”. It is no surprise that economics guru Professor Ravi Batra felt compelled to write another best seller to focus the world’s attention onto basic flaws underlying its economy.

His concern is: World Poverty. Millionaires and Billionaires abound in every country. In myriad ways our lives today seem better than in past centuries. Is Dr. Ravi Batra living under some illusion that there is world poverty? Well, no – he is an economist and a man of facts. Using actual figures he substantiates his claim that world unemployment, debt and poverty keep on soaring in most developed and underdeveloped countries of the world.

Low purchasing power is a real concern for nearly every family in rich and poor countries. Where the income of one family member used to be enough to run a family, today it takes husband and wife both to provide for the basic necessities. There is constant economic insecurity among the general populace in almost every country – from the United States to Uruguay and from Bangladesh to Brazil. This is a perfect recipe for brewing revolutions. When common people are without sufficient purchasing power, they begin to notice the wide disparities and inequalities. Their patience runs out and they resort to violence, protests and revolts. It is high time to address the real issues: the causes of underdevelopment and growing poverty in every country.

The basic thesis of Professor Batra is that recessions and unemployment occur when there is a persistent rise in the wage-productivity gap. In other words, when labor productivity rises faster than real wages for some time, a gap develops and ultimately leads to layoffs and a jump in the rate of unemployment. But that is not what the popular theorists believe. They contend that real wages are proportional to productivity in a market economy.

The free-market theorists seem blinded by the myths of free trade and free-market capitalism, which make them unable to see that human greed needs to be reined in by public policy. Without constraint it will lead to the instability described by Dr. Batra. Despite evidence that wealth concentration and income inequalities are increasing across all developed world, there has not be a single drastic step to bring balance in economic affairs. Instead, the blind economics profession, fed propaganda from psuedo-intellectuals and politicians bought by the wealthy, has been using “weapons of mass-distraction”.

It is high time that well wishers of humanity rise to the occasion and begin to separate wheat from chaff, looking at the current state of world economy in light of the critical eye offered by Professor Batra and his inspirational mentor Shrii Prabhat Rainjan Sarkar. There are sufficient examples in economic history of big corporations being broken down and reined in to ward off the dangers of “monopolists and oligopolists”. Today, by contrast, large banks are considered too important to be allowed to fail, and are bailed out at the citizens’ expense.

When economic power gets centralized to that extent, there are sure to be excesses and the net result will be the “wage-productivity gaps” mentioned above. Professor Batra puts forth the recommendations of the Progressive Utilization Theory (PROUT), suggesting that we minimize wage-productivity gaps by converting all corporations into worker-owned cooperatives. The world needs economic democracies as much as political democracies.

Dr. Ravi Batra is a man of courage like his venerable teacher Shri Prabhat Rainjan Sarkar, the propounder of PROUT, and despite the neglect by his own profession and Nobel Foundation, Dr Batra has been writing book after book over the past four decades pointing out the wrong theories that dominate current economic thought. In this present book, he removes the mystique that shrouds the sophisticated economic theories and presents a common-sense short course on macroeconomic principles that even a layman can grasp.