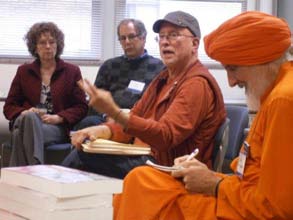 In her inspiring opening talk, Nada Khader said: “Shrii Prabhat Ranjan Sarkar, the founder of the Progressive Utilization Theory (Prout), said that we must elevate the status of agriculture, that agriculture and agricultural work should have the same status as industry. Think about the automotive industry and how, over time, auto workers accrued decent compensation packages, worker protections and benefits. Imagine how our food system would be transformed if we applied the same standards to agricultural work. We need federal and state policies to promote the welfare of family farms and agricultural cooperatives which will enhance food security for all.” 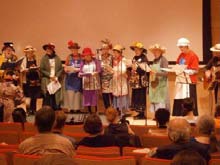 The Saturday night cultural program was superb, with seven acts that each lasted 15 minutes, with perfect timing. Dada Vedaprajinananda, the excellent Master of Ceremonies, opened with jokes and his own songs about social justice and “Trickle Down Economics”. Fourteen grandmothers in The Raging Grannies sang funny, radical political songs. The hilarious Forward! Marching Band got everyone on their feet and dancing. Karen Libman was an incredible story-teller who told about “Naked Truth”. The Master of Ceremonies and the first act was Dada Vedaprajinananda who sang about “Trickle Down Economics”, and the finale was Dada Nabhaniilananda who gave the world premier of his new composition, “A Revolution of Love”.