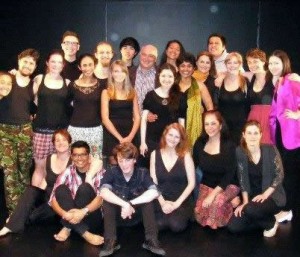 In the Fall, 2012, a community theater production, Cultural Clash, displaying the multicultural face of Auckland, featured a cast of 40+, professionals and others from the community. The production opened with scenes from the conflicts from Kosovo that have forced immigrants to flee from their homelands. Fragments from diverse personal histories were entwined to build a dazzling collage that honoured the uniqueness of each. Performers were from different backgrounds, ethnicities, ages and disciplines with fire, music, dance and theatre. Directed by: Beth Kayes, Creative Producer: Margaret-Mary Hollins, Story Consultant: Renee Liang, Musical Director: Jyoshna La Trobe, The show had 8 performances given to appreciative audiences with glowing reviews, and featured the music of Prabhata Samgiita performed by Jyoshna, Kavita and musicians. The photo is of the Culture Clash Cast with Race Relations Commissioner, Joris De Bres. 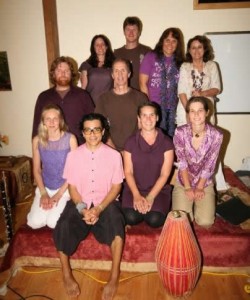 has formed with members coming from Auckland, Northland and Waiheke Island. The Choir has around 15 members at present and is directed by Jyoshna. They meet every Thursday night to sing Prabhata Samgiita and devotional songs. The Choir performanced at Voices of Sacred Earth festival, February 8-10th 2013, and a Yoga Conference in March. They were a great success with many different culture/spiritual groups joining the BNK Kirtan. At the festival, Jyoshna led two workshops covering the foundation blocks of devotional music (kīrtan), focusing on specific kirtan ragas and instrumentation, such as guitar and Indian khol drum.

Stars in Her Eyes, feature film

“Our movie is about an Indian woman who is trying to come of age, albeit later than most. It is essentially an immigrant story which many will identify with.” said Athina.

Situated in the beautiful setting of bush and sea, this studio will suit the needs of Kirtan singers worldwide. Soon to be launched, donations kindly accepted to complete the development of this project. Tel: 0064 9 8109602