Who Is Afraid of the Big, Bad Wolf?

Awesome Stories for the Courageous and Curious 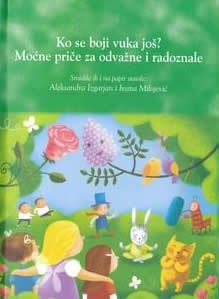 The primary goal of the program Storytelling for Peace, Gender Partnership and Cultural Pluralism is promotion of gender equality, cultural tolerance and inclusive education as well as non-violent conflict resolution. A large number of traditional stories studied in schools in Serbia (and beyond), despite their undoubted aesthetic and cultural values, contain gender and cultural stereotypes which, to start with, present young women as victims, passive, sleeping beauties who wait for the prince to wake them up and save them (Cinderella, Red Riding Hood, Snow White, Beauty and the Beast, Little Mermaid). Older women are most often portrayed as evil (evil witches, fairies, queens, step mothers) and dangerous especially for young women whom they are trying to destroy.

In Serbian folk tales and poems women fall into two broad categories: mothers (mother of nine Jugoviæi, mother of king Marko) and nurturers (The Girl from Kosovo) and they are presented as nameless and silent bystanders. Some of these stories directly or indirectly advocate violence against women and create prejudice against marginalized groups (story Magical language, poem Building of Skadar). Thus many traditional stories can have negative and devastating influence on positive human and democratic values. Specifically in many traditional European and Serbian stories violence against women is the norm, conflicts are resolved violently while social hierarchies and gender, racial and national stereotypes are preserved. Selfishness, cruelty, spitefulness and manipulativeness are often common characteristics of the heroes and the methods they use to achieve their personal goals since they are not interested in solving problems in a way which would be beneficial for the whole community. Unlike the heroes, the heroines in the traditional stories solve all their problems by getting married. Revenge instead of reconciliation, forgiveness and dialogue is also a common point and often other nations are presented as enemies and not as collaborators and potential friends. Addressing such contradictions, especially in the context of post-conflict society such as Serbia, is crucial for fostering peace oriented, ethical and caring relations as well as democracy rather than authoritarianism and violence.

Critical analysis of themes and methods of conflict resolution in traditional stories is therefore essential in the process of creating a society which rests upon modern, positive and democratic values, that is, a society which has as its main goal well-being of all its citizens, both male and female, and of all cultural backgrounds. The program Storytelling for Peace, Gender Partnership and Cultural Pluralism and the book Who Is Afraid of the Big, Bad Woolf? Awesome Stories for Courageous and Curious focus on improvement of the educational and pedagogical practices in relation to the following problems: discrimination, prejudice, gender, racial and national stereotypes, direct, verbal and psychological violence, especially violence against marginalized social groups.

The book Who Is Afraid of the Big, Bad Wolf? Awesome Stories for the Courageous and Curious, contains ten stories and one poem. The book uses motifs from traditional stories and poems in a new and innovative way since their heroines are independent, resolute and just, they oppose gender inequality and discrimination of any kind and together with changed male characters present positive role models for children. Traditional story motifs are from Cinderella, Snow White, Red Riding Hood, Zidanje Skadra – Building of Skadar, Kosovka Devojka – The Girl from Kosovo, Smrt Majke Jugoviæa ­ The Death of Mother Jugoviæi, Devojka cara nadmudrila – The Girl who Outsmarted the Emperor, Alice in Wonderland, ciklus o Marku Kraljeviæu ­ Marko Kraljeviæ series of poems.

Through retelling of traditional stories and creation of new ones, the book aims to promote positive and democratic values, and society which is open for all. The objective of the book and the program is prevention of violence, prevention of discrimination (i.e. via gender, racial and national stereotyping) and the inclusion of children and students from socially marginalized groups, including children and students with disabilities. Poem Jedna Mala princeza (One Little Princess) explicitly engages with the social inclusion of Roma students. Reworking of Alice in Wonderland in the story Milica i Danica u Miroljubivoj Zemlji Èuda (Milica and Danica in a Peaceful Wonderland) deals with nonviolent conflict resolution and promotion of peace culture. Several stories focus on cooperation of children and animals (Red Riding Hood, Fairy Ravijojla), preservation of environment through recycling (Cinderella) and respect for nature (Zidanje Skadra i vila Zagorka – Building of Skadar and Fairy Greenleaf) in order to awaken ecological consciousness in children and develop their responsible attitude towards the environment.

The book Who Is Afraid of the Big, Bad Woolf? Awesome Stories for Courageous and Curious aims at inspiring girls and boys to continue creating stories for the new age and better future.

The basic objectives of the program therefore are promotion of: tolerance and inclusion, basic human rights, gender equality, ecological awareness, cultural pluralism, critical thinking and reading, creative writing and non-violent resolution of conflicts. The book has 4 priorities which correspond to the priorities set by the Serbian Ministry for Education:

Priority 1: Prevention of violence against children and maltreatment of children
Priority 2: Prevention of discrimination
Priority 3: Inclusion of children and pupils with disabilities and children and pupils from socially marginalized groups as well as development of individual educational plans for them. (The program and the book are primarily focused on inclusion of pupils from socially marginalized groups.)
Priority 4: Development of communication skills

Methods and strategies which are part of the program and which are described in the Workbook at the end of the book of stories Ko se boji Vuka još include reading of traditional and new “retold” stories, analysis of values and messages of traditional and new stories as well as participation of children in creation of their own, new stories. Practical strategies, games and activities for students are also suggested. These described methods are relatively simple, flexible, accessible and inexpensive so it is possible to use them in most educational and pedagogical processes. They can also be used by parents when they read and tell the stories to children and discuss them afterwards, or by professors, teachers, educators, and experts in the classroom while they work with children. Further to this the book and the manual could be used in the fields of: Serbian language, literature, social sciences, liberal sciences and civic education. They could as well be used in workshops on education and pedagogical processes designed for experts and trainers. Through the use of stories, dialogical approach in all these processes is promoted. So is creativity and critical thinking both in the case of children and students as well as teachers and educators in general. Therefore, instead of proscribed didactic approach, through reading, analysis, retelling and writing of new stories, indirect approach which respects opinions and attitudes of the children so that they feel valued by the parents, teachers and the society is promoted. Reading, analysis, retelling and writing of stories have been proven in practice to be very efficient educational and pedagogical methods for the achievement of the above mentioned educational goals.

For all further information please contact the authors of the book and the program Dr Aleksandra Izgarjan and Dr Ivana Milojevic .