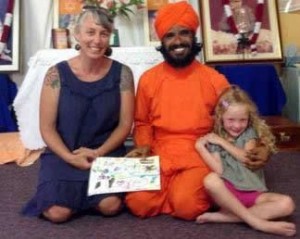 California and Jamaica
Sharing the Wealth

The Kentucky Flat Community Preschool in California, USA, directed by Jen Norris, collected art supplies from the parents and teachers of the school to donate to a needy school in Jamaica. Jen made contact with Didi Gunamaya beforehand, and during her family’s recent trip to Jamaica, they visited the Ananda Marga Preschool in Kingston and delivered the art supplies in person. Dada gave them a tour of the school that offers services to low income families of children 2-6 years old in Kingston.

Excerpts from a letter sent, by a parent of an alumnus, to director, Eric Jacobson

“Dear Eric, On Friday morning, September 13, at nearly 9:30 an announcement came over the loudspeaker at East Meadow High School. Mr. Howard, the principal, cut into third-period class time to reveal the names of the valedictorian and salutatorian for the class of 2014. The recipient of the top award for scholastic excellence spanning several years .. turned out to be an individual well known to you: Nathan Siegelaub. You might not remember that the six-year-old boy, who once sat in your office amusing himself with puzzles and books while his parents underwent a sort of grilling as to his suitability for attending Progressive, had planned on being enrolled just for kindergarten and then moving on to the public domain. But life often takes unexpected turns and Nathan’s certainly did as he ended up staying on eight more years (thanks, in large part, to your generosity and sensitivity) in which he absorbed the lessons that would form his character, work ethic, and pure love of learning.

Probably you are not aware of just how pervasive an influence you’ve had on Nathan’s makeup: You, Eric, were his choice of topic and subject for an essay assigned to all candidates for induction into the National Honor Society. You who changed his way of looking at the world; you who sparked his interest in knowledge that ignited his imagination and creativity; you who gave him the confidence to take on challenges and pursue excellence; you who recognized his character and worth and, with patience and care, nurtured his very soul. So it was not without emotion and consideration that Nathan lauded you for being his role model.
…
On the verge of applying to colleges and years removed from Progressive, I’d like to take this opportunity to express Betsy’s and my gratitude for all you’ve done for our son and for all you still do in terms of the impact you have had on his (our) lives. An educator can receive no greater accolade than the one bestowed on you by Nathan, who credits you and Progressive for endowing him with the grit and intestinal fortitude to overcome obstacles and with building leadership qualities and confidence that allow him to set lofty goals and achieve superior results. The Siegelaubs thank our lucky stars that we had the opportunity to be part of your family at Progressive, and, rest assured that you will always be part of ours. With utmost respect and thanks, — Marc Siegelaub” 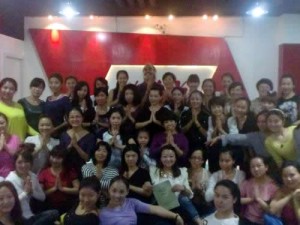 Fifty teachers from all over mainland China attended the two day Kidsyoga teacher training in Bejing, where yoga and Baba Nam Kevalam meditation were taught and practiced.

Dada Shambhushivananda gave a talk on Money, Power and Purpose.