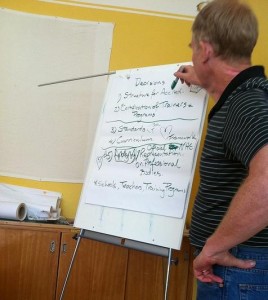 There are times, the historian Eelco Runia 1 argues, when we humans do crazy things like leap into a future that is unknown and murky. This ‘leap’, Runia continues, is a form of ‘fleeing forward’. It is illogical in that it comes as a break with tradition and the past; it is also illogical because we do not necessarily know that whatever we leap into will be a better condition to live with than what we are fleeing from. This is an interesting idea to play with when we think about our work in Neohumanist Education. We can argue that Neohumanist Education is timely; that it grows out of a search for alternatives to the tried and failed educational experiments of the present and recent past; that given the current spiritual and environmental malaise of capitalist globalising culture neohumanism is the best of best alternatives. Yet, this logic will not give our movement wings. It will not call us to leap forward. Logic alone is never enough – it may be a sufficient condition for a new civilisation but it is not a necessary condition. The drive to flee forward into a range of neohumanist futures comes from another part of our individual and collective selves.

For Runia this drive comes out of us doing things that are better for us all now. Historically the rationalization of our actions, he argues, comes after the deed. In Gurukula for instance we are all working for a better future and seeking to understand our actions as a form of service, a blessed task we perform in loving relationship with the Cosmos, an ongoing learning journey, an experiment in culture building. Yet really what we are doing is trying to make a difference for those we serve. As we move forward we reflect and expand on our actions in order to make sense of them, and from this to develop the ability to share what we have learnt with others. We are leaping, perhaps even fleeing into the future with our hearts in our hands; we will have to wait for our heads to catch up. In this field of endeavor the world of action always precedes the world of thought. As the great Yogi, Swami Vivekananda once quipped:

“Who cares whether there is a heaven or a hell, who cares if there is an unchangeable or not? Here is the world and it is full of misery. Go out into it as Buddha did, and struggle to lessen it or die in the attempt”

In July of this year a group of Neohumanist educators joined with other innovative educational professionals at Ydrefors, Sweden to share and expand on what we have been doing in our various projects. The goal was to consolidate, dialogue and build the platform for some serious ‘fleeing forward’. This gathering marks a new phase of institution building for Gurukula in which we

move from abstract ideas and hopes to the concrete world of deeds upon which the future of Gurukula depends. To facilitate this move key people involved in the Gurukula movement met for three days before and after the conference. During these sessions we spent time reflecting on and celebrating what had been done; we acknowledged what still remains to be done; and then set ourselves goals to address these structural requirements. Many of us acknowledged that on our own we could only achieve so much, so one area that we committed to was working towards greater community. Community can help us by offering collective solutions to individual, location specific, needs. Community also harnesses the collective imagination and generates inspiration.

For all present both before, during and after the conference it was important that the goals we set were realizable, so we focused on establishing more effective communication networks between projects. We decided to have these networks based on regional collaborations and to allow each regional entity to develop its own agenda. We also decided to start Gurukula conversations and to run these via webinars in which we share, celebrate, inform and grow our community. At the structural level we also worked on clarifying Gurukula’s role as an educational and organisational structure. Here the focus was on beginning the work of moving into the tertiary domain and on building regional functioning faculties. For instance Singapore will work towards hosting both the South East Asia and Pacific Yoga Teacher’s Faculty and a Teacher Training facility; Thailand will be a site for a Neohumanist Educational Research Institute and Europe can be a hub for Microvita studies. The Yoga for Kids movement is gathering momentum and demonstrating a clear commitment to collaborate with kindred spirits around the world.

Another issue we addressed was the need for school accreditation and teacher training. This was deemed to be of the highest priority and we in Gururkula are currently working on a model for accreditation that will meet the diverse needs of schools world-wide. There was also a focus on recruiting able and committed folk to leadership roles in the current 44 faculty structure of our future Gurukula

University. This is of course ongoing but over the days together we all became increasingly clear as to what our structure should look like and about how we can operate more effectively at the global and regional levels.

Generally, attendees left feeling motivated and much more connected to both Gurukula as a central element of Neohumanism’s mission but also more connected to one another. The need for ongoing and regular networking was recognised as the theme for a robust and dynamic Gurukula movement. For many this seemed best represented at the regional levels through a range of centres and at the global level by a cyber-university based on a physical campus or series of campuses. In addition, the emergence of regional hubs also sets the scene for a global campus for Ananda Marga Gurukula in which diversity, what Dr. Sid Jordan called a ‘garden of diversity, is celebrated and the link between service and knowledge, founded on our spiritual practices takes centre stage.

For me this all points to a pragmatic ‘leaping’ and a devotional ‘fleeing’ in which the future neohumanist landscape beckons to us as a terrain more favourable to the expression of humanities’ greater potentiality. It is clear that to foster this sensibility we need to cultivate the relational consciousness that has its source in the philosophy of Neohumanism and finds its dynamism in our individual and collective spiritual life. This gathering made it clear that we all must take responsibility for building a future in which diversity is valued and indeed recognised as a central feature of social evolution. We nurture this relational consciousness through our meditation and a real commitment to communication and its co-creative possibilities.

April 19 – Henk de Weijer
Reflections about the Nature of Microvita

To participate in a webinar, please go to www.gurukul.edu for times and instructions