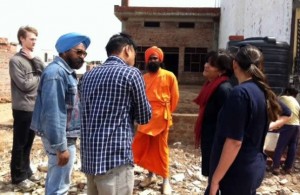 With personal guidance and inspiration from Dada Shambhushivananda of AMGK and cooperation of a local team consisting of Ravinder, Jasbir Singh, Payal Sodhi , Daavin Vohra, Dada Atidevananda and many others, a program has been launched to establish a “Neohumanist Center” in Naya Gaanv, just behind PGI, Chandigarh. The land has been donated by Ravinder and the construction is being made possible by cooperation of many persons. Recently, Dada Shambhushivananda and his team also visited the site and announced that a community kitchen will be started soon. This initiative led by Payal Sodhi will be supported by the local Smarpan Foundation also. Daavin Vohra is preparing to establish a Yoga Academy at the same site to bring the benefits of yoga and sentient life style ideas to the local population. 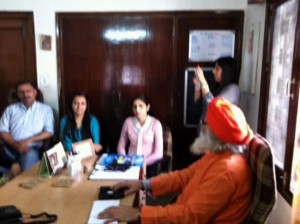 AMGK has chosen Chandigarh as one of its hubs in India in order to share its visionary programs and initiatives. In 2015, a conference on “Neohumanism: Thought and Practice” is also being planned in Chandigarh to commemorate the 25th anniversary of AMGK. Other plans include tutoring of neighborhood children, NERI (Neohumanist Education Research Institute) and medical services.