Neohumanist Education for the Personality Development of Children 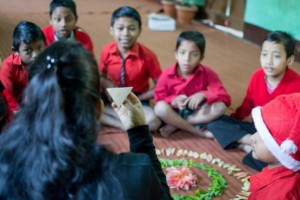 Personality is the sum total of different processes and activities of the individual. It is the integrative organization of all physical, intellectual, psychosocial and affective characteristics of an individual. All these determine a person’s unique adjustment to his environment. Allport’s suggestion is that ‘personality is what a man really is.’ Now the question is what is man really? Is he simply a physical being? Or a psychic being? Or more than that? Neohumanist Education clearly states the real existence of a being. NHE focuses on the development of three unique dimensions of a child. Human beings are more psychic than physical and more spiritual than psychic. There is a continuous focus on physical, mental and spiritual development in NHE curricula.

Neohumanist Education supports Adler’s individual psychology. Both of them considered the individual as unique and aware of the why of his actions. A child is capable of consciously planning and guiding his actions towards self actualizations. According to Adler, the actions of individuals are rooted in fictional ideas which Adler considered are not reality and termed as “fictional finalism”. But here in NHE, actions are rooted in ideas which are not fictional but rather rooted in ultimate reality, the ideation of the Great. NHE fosters among children future goals and moral principles. The future goals of individuals affect their present behavior.

NHE does not believe in the behaviorist approach to personality development which is mechanical. Higher spiritual forces within the individual reflect on a person’s behavior. They control instinctive desires and impulses. This can be called the super ego according to Freud’s psychoanalytic theory. Children are taught spirituality as a practice and spirituality as an essence. This inner force liberates the mind from mundane objects and helps in the development of progressive thinking devoid of dogma. This elevated thinking process translates into noble actions and thus helps in development of the personality.

When people confront moral dilemmas, it is reasoning that is important. Kohlberg theorized that people progress through three levels as they develop abilities of moral reasoning; pre-conventional, conventional and post-conventional. According to him, the post-conventional, that consists of two stages, namely, the social contract orientation and the universal ethical principle orientation, is the highest level of moral development.

NHE focuses on the development of moral judgment by regular observation of ten universal moral principles. NHE teaches five principles of harmony with others and five principles of harmony with self. So children define their own values in terms of ethical principles. NHE fosters the rationalistic mind, the mind that decides what is wrong or right rather than the rules set down by the adults. This is the highest form of moral reasoning. What is right is defined by the decision of the conscience. There is a regular attempt to develop rational mind and awakened conscience in Neohumanist curricula. 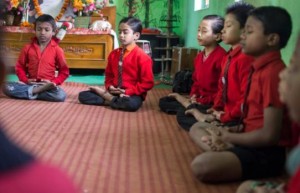 The curriculum of NHE is framed in such a way that the noble aspects of a child are explored. The child realizes that animals also experience pleasure and pain. Even inanimate things have minds that are in a dormant stage. Children start realizing that there is a fine linking thread among all creatures — living and non-living. Rationalistic mentality applied in NHE helps the children to realize the sense of duty and higher level of understanding that they should be sympathetic to all living beings. Rather than teaching children to do what they think is good, NHE cultivates moral judgment in such a way that before executing any action they should think whether it is conducive to human welfare, whether it is for the benefit and happiness of all beings.

Regular Practice of Meditation – the unique feature of NHE curriculum

By regular practice of meditation, the subtle nerve cells of the brain start functioning. The collective mind of those subtle cells exerts pressure on the pineal gland which controls the secretion of other glands and thus helps maintain emotional balance. Children become self disciplined and feel inner joy. Meditation brings changes in the attached nerve cells and nerve fibres of different glands and sub-glands which regulate the secretion. Thus, their thought processes also change and actions are controlled in a systematic way. Hence, total biological transformation needs spiritual practice.