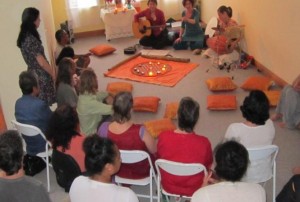 We were so blessed to have Samgiita (Cecilia Valentim), Mohan and Anna Luiz visiting us from Sao Paulo, Brazil. Samgiita is a brilliant singer and leader of sacred songs workshops with a depth of musical experience to share. Samgiita’s workshop was delightful and very interesting as she taught us many indigenous Brazilian songs and dances as well as discussing the historical background of Brazilian music with their African, European and various influences. We learned a great deal first hand so it was a real privilege to have her share her musical knowledge and experiences with us.

The evening concert, was very special. Samgiita carried everyone away with her exuberance and joyful expression, as we sang and danced indigenous Brazilian chants and kiirtans. As the evening developed the ambience flowed into songs that spoke of deep devotion and social rejuvenation. Many people attended, some attracted to spiritual/indigenous music and some connected to us through our service projects in the area. After the concert, we had a delicious vegetarian meal so people stayed afterwards and enjoyed the beautiful atmosphere.

Singing the Name of the Supreme 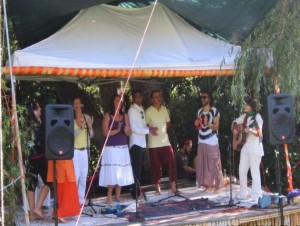 The Voices of Sacred Earth Festival (VoSE) held at Kawai Purapura on Feb 27- March 1st, was very successful on many levels. From the perspective of someone who organised the kiirtan stage and concert it was wonderful to have eight different spiritual groups come together to participate in the multi- faith Akhanda Kiirtan. We went for 9 hours each day, so 18 hours in all; one group following the other in a seamless flow of singing the names of the Supreme in many styles and sounds. There were Amma bhajans, Sahaja Yoga, Hare Krishna, Sikh Kiirtan, Shakti Sacred music, Shrii Chinmoy and of course Ananda Marga kiirtan groups. Sitting there throughout Saturday I experienced the rasa through every kiirtan, when a deep a surge of love and bliss would come flooding over the kiirtaniyas as one could see on their faces, in their smiles, their eyes and movements and this was felt by the audience, filling us up with inexpressible bliss. Some people were crying saying they had never had such a powerful kiirtan experience before. Our Ananda Marga kiirtan group was made up of a diverse group of ten people, and many great contributions were made those days. We performed Rarhii kiirtans and various other kiirtan melodies as well. I am grateful to have been graced to initiate this festival which now is in its 3rd year and very well established. As far as I know there is no other festival in NZ where so many indigenous people from all over the world come together in one place to connect, share their love, music-culture and spiritual knowledge. The kiirtan sustains those at the festival and draws together all the veins of our global heart.

The evening performance of “Dharma Cakra”, at the VoSE Festival was the most challenging performance I have ever done. It’s a 70 minute long performance with a 25 minute piece called Creation Cycle inspired by Ananda Sutram. It has two Prabhat Samgiita songs, 2 kiirtans, Samgaccadvam, Forest Meditation, Akhanda Mandala and then The Creation Cycle. Our little orchestra consisted of flute, violin, 2 cellos, taonga puoro (traditional Maori instruments), tabla, khol drum and percussion players, an opera singer and me, so eleven of us on stage. All I can say is that we did it by Grace. It was very special to look around and see people in the audience, even confirmed atheists, singing Baba Nam Kevalam and being blissed out by Ananda Sutram. My hope is that we will perform it next time in some classical halls of the world. If you don’t already have the album it is available through my website (www.jyoshna.com) and through Innersong.