The conference afternoons were designed to give participants the opportunity to teach, learn and collaborate with others in areas of their interest and work. There were parallel tracks that included time for workshops, discussion groups and open space time.

Those working in NHE projects, doing research in this field or otherwise interested in this area, had a few shared workshops, and time to meet in specific interest groups afterwards.

The ECE interest group had lively discussions on programming, environmental setup, developmental assessment, parent/community involvement and other very practical applications of NHE philosophy. Ruai Gregory shared her presentation on “Components of a Curriculum”, which sparked further interest in the development and content of learning centers, as well as the importance of providing nature-based education, both indoors and out. Everyone shared about their programs and enjoyed brainstorming solutions to various issues.

This group focused on ways to teach meditation and yoga to children. Some of the techniques discussed were getting everyone involved with fun warm ups, using music to send the mind inside, whether holding the breath is appropriate for asanas with children, which asanas are best, how to deal with students who are disruptive. Each person in the group had experiences and ideas to share.

Birth and Infancy with Didi Ananda Uttama and Jody Wright

This group focused on how mother-baby classes and groups can be set up in a school; what the benefits and challenges are, and some of the structures that can be used. They also discussed how to raise children. 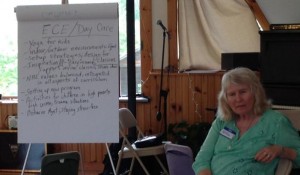 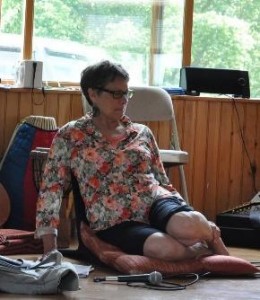 Professor Kathleen Kesson led discussions which considered research from both an academic and a practitioner perspective. Group members shared their own contexts and discussed issues in their professional lives that needed deepening through research. Such issues included:

AMGK is composed of over 50 faculties. A few of these were represented at the Conference, and during the afternoons they were given the chance to meet with others working in the same or related fields to share their work and collaborate. Groups that met included

The yoga and intuitional science workshop group, decided to separate into 6 mini-presentations. Kristine Weber described the physiology of fight or flight reactions and stress responses. Eileen Maxwell demonstrated a few components of trauma-sensitive asanas that are helpful for individuals with severe anxiety and depression. Richard Maxwell reviewed how misleading information is produced by media over-dramatizing the results of research studies and causing distorted impressions. Livus Lundkvist reviewed a multi-stage program that he uses to help people expand their communication skills, deepening relationships through more open and honest exchanges. Ruth Lee presented the benefits of meditation to the functioning of one’s brain. Sid Jordan presented a form of somatic therapy which has some resemblance to asanas and which is oriented toward correcting poor physical body habits. 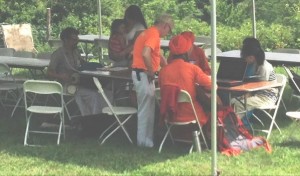 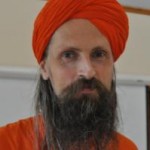 Dada Diiptimanananda started with introducing his thesis on the subject, “Devotion, Creativity and Composition: Music in Ananda Marga and Its Philosophical Base, Aesthetics and Practice.” This thesis was written from 2009-2013 as part of a Master studies in Ethnomusicology in Tainan National University of the Arts (TNNUA). Dada introduced some of his key findings in his research on Prabhata Samgiita (PS) and kiirtana. The discussion went gradually into more practical aspects such as how to maintain the beauty of Prabhata Samgiita when we use guitar or other Western instruments, and what the key elements are that need to be preserved when we learn and present PS. This part became very enjoyable and we sang several songs covering the whole afternoon session, with inputs from everyone present in the workshop. The main aesthetic features that need to take into consideration are ideation (bha’va), language (bha’sa), melody (sur), and rhythm (chanda). Pritilata Kopetsky sang several songs demonstrating the subtlety of the melody, James Steen accompanied on tabla, and Dada Diiptimanananda sang a few songs and demonstrated how to play Prabhata Samgiita in Jhaptal on the guitar. 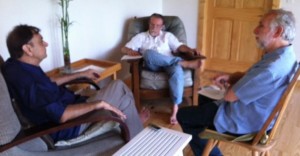 PROUTist met to discuss and analyze current global conditions and develop individual and collective strategies for change. These include networking with allied groups and key figures, building greater online presence, and holding events and conferences. Dr. Ravi Batra presented his new book at the public program (see book review in this issue on page 37), and was also interviewed.

MU Site Planning Design – Dhyanesh Fleury
Dhyanesh met with members of the Ananda Aungira Master Unit. He had drawn up plans for them many years ago, and they spent the workshop time reviewing and revising those original plans. 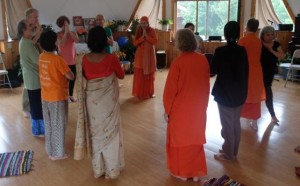 In the dance workshop, participants explored ways of dancing and moving together that strengthen communication, empathy and creativity.

A key tool in dance therapy is a moving circle with empathic mirroring of each other. Participants explored how to use dance and movement in teaching songs, and to express ideological concepts simply and with impact. Neohumanist ideology can be expressed through moving together and supporting the movement everyone is doing. 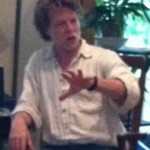 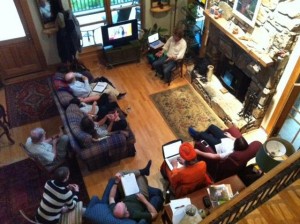 This workshop focused on making promotional film for spiritual groups. Kevin encouraged participants when creating a film to start with the ideation of “May this film be a service to all beings”. Kevin addressed key aspects to filmmaking including a balance between intuitive and practical aspects, setting goals for one’s film, transcribing interviews and organizing the information, editing, deciding whose perspective the film will portray and deciding on the target audience for the film. Kevin shared a spiritual promotional film he recently made in San Francisco for an Ayurveda organization to illustrate each of these essential ingredients in promotional making a film. The dozen participants attending this workshop expressed deep appreciation for the integrity and skill of Kevin as a teacher and filmmaker. They felt inspired and empowered to implement his clear formula for creating promotional film that could best serve organizations and society.

Family Systems and Emotional Wellbeing, Creativity and Learning for Teachers and Children – led by Linda Baker 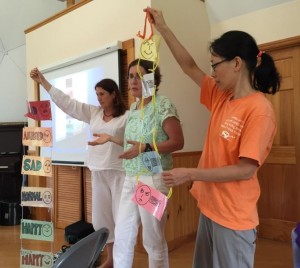 This experiential workshop was based on the premise that learning environments can be substantially improved by focusing on the emotional wellbeing and creativity of both teachers and students. It drew on research and exercises developed by the ECL Foundation (Emotional Wellbeing Creativity and Learning Foundation) as well as that from Systemic Constellation Theory which is premised on the importance of understanding family dynamics in oneself and one’s students. Through exercises, participants first experienced these ideas through their own adult lenses and then were taught how they translate into tools for the classroom and the whole school system. 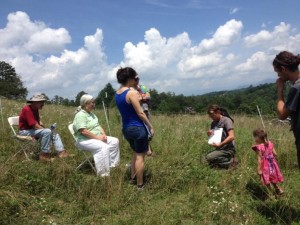 High-productivity agro-forestry is an up-and-coming field of agriculture that helps integrate tree crops into existing farm systems. Whether it’s a livestock operation, vegetable farm, or cropfield; trees have an important role to play in soil conservation through their action as windbreaks, nutrient accumulators and micro climate creators. Additionally, trees offer shade and forage for animals, add value and beauty to your property and a diversified source of income for the farmers. Geoffrey Steen’s agro-forestry seminar demonstrated the beginnings of such a diversified tree-crop system being worked into an existing dairy farm. In the future, this 20-acre research site will be increasingly self-renewing (refers to nutrient cycling), productive of food for humans and livestock, and a model for replicating such an integrated systems within similar bio-regions and adapting it to different ones. 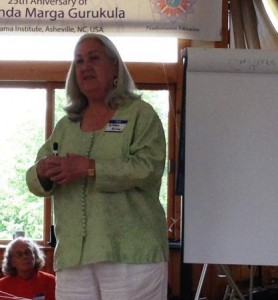 Contemporary Western forms of education have played a significant role in colonial expansion, empire building, and the destruction of local culture and language. Neohumanist Education strives to honor local and indigenous cultures, calling upon us to draw lessons from pre-modern, pre-colonial cultures and preserve what we find valuable in modern education to construct a post-modern, post-colonial form of education for an Ecozoic Era (defined here as a new time of human mutuality with the Earth and other members of the Earth Community). This workshop was framed as an opportunity to discuss issues that arise when educators aim to both honor local culture and support the development of an enlightened universalism.

We began with a brainstorm, in which participants listed as many components of culture as they could think of: language, customs, traditions, gender roles, food, holidays, gestures, rhythm, and body language, sense of time, attitudes towards birth and death, architecture, relationship to nature, etiquette, etc. This was followed by a short workshop introduction to frame the ideas we would be discussing. It was acknowledged that the room was filled with people from a multitude of cultures, all or most of whom have also had extensive experience in cultures other than their own. The workshop leaders, Marcus Bussey and Kathleen Kesson, thus presented themselves not as “experts” on cultural issues, but as conversation facilitators charged with the task of eliciting the wisdom of the collective.

The overarching question for the workshop posed as a “problem” the point that as educators who engage in contemplative spiritual practices, we may come to regard ourselves as “trans-cultural” – or beyond the grip of culture. Yet it is important to remember that forms of pedagogy are culturally specific and we can unconsciously project ways of thinking and problem-solving that are specific to our cultural origins. The workshop was an opportunity to explore these issues. The overarching question posed was “How can we avoid new forms of colonialism as we move ahead with the best of intentions in our educational work?”

The method of inquiry in the workshop was a narrative format, with small groups choosing one of four questions to engage with, followed by a large group sharing of what was learned. What follows are the four questions posed, with a very brief synthesis of the group’s commentary in italics.

Here is a list of some books that might prove useful in the study of culture and pedagogy.

Our Global Association of Neohumanist Educators (GANE) brings all together to network and share whether teachers, researchers or administrators. We welcome Niiti Gannon on board the staff. If you are an educator and have not joined GANE yet, please do so at www.gane-educators.org. For more information contact:

The newly formed P. R. Sarkar Institute offers a repository for collecting and sharing resources as well as a center for research. If you would like to assist with this project, please contact Dada Gunamuktananda at .

The newly developed Neohumanist College offers an online environment for teaching and learning utilizing Moodle. For more information, to inquire about a course or to offer a course, please write to: . Also visit websites: nhcollege.gurukul.edu and nhc.gurukul.edu/moodle. 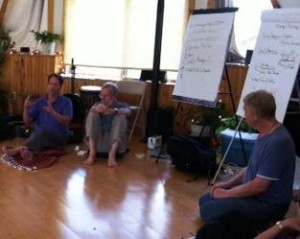 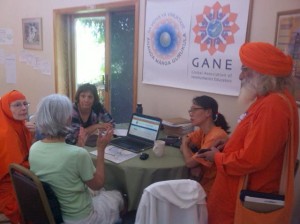 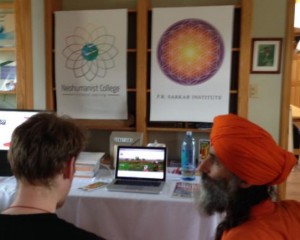 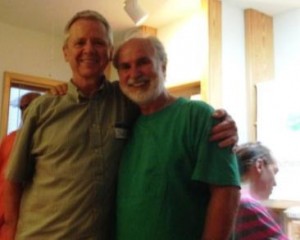 Dr Sid Jordan and Dr Marcus Bussey led the closing session for the AMGK Conference. The focus of the session was on identifying the highlights of the conference and on making a commitment to some kind of action based on these.

This was a very interactive session. Groups were formed around the key interest areas explored over the previous days and Livus Lundkvist led a Deep Listening session which complemented these group discussions.

Extensive documentation of the ideas and aspirations of the moment was conducted with groups reporting to the collective on their main points. Groups were then broken up so that we could explore possibilities across interest groups and break out of narrow identifications with specific areas.

Organisers reminded participants that AMGK is committed to open systems of coordinated cooperation as manifest in the concept of transdisciplinarity. Transdisciplinary action creates fertile ground for creative and integrated approaches to the implementation of Sarkar’s vision of a new Renaissance in human civilisation.

In conclusion we reflected on these inspiring and challenging words from P.R. Sarkar:

“If human beings think seriously, they can perform small and big tasks unitedly in a beautiful manner. Work can be accomplished in a short time and with very little effort, the welfare of a maximum number of persons can be effected.” 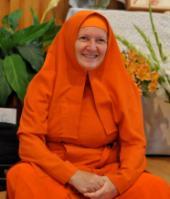 GANE members can access powerpoints of presentations and evening programs at gane-educators.org