The future of food and restorative land management 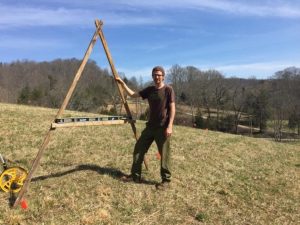 The rate of social change is unimaginably rapid. Take the example of electricity: lights, trains, the internet, mobile phones & refrigeration. Less than a hundred years ago, most of the world lived without these things, and even today about 1/3 of the world’s people continue to live without power or a reliable source of it. In this article I will be discussing agro-ecosystems, not social change. The example merely serves to charge the imagination a little; to make it capable of stretching out to view possibilities beyond its container of the mind, a thing also ordinarily limited by its appetite for objects of study, e.g. books and media focused on the present or the past.

I like to study history for imagining the future. Changes in the Land by William Cronon is one book of many that have aided me in understanding the inseparable histories of ecology and society, in particular of how rapidly human culture and economic need leads ecological change. Is it possible the Eastern woodlands may again be drastically diminished? Due to shortage of heating oil, for instance, how many years would this rich forest survive millions of homes seeking an alternative heat source? I would not like to waste time pondering this question because it is much too urgent now to imagine solutions and take action for existing ecological problems around the world. These problems and their solutions will become replicable models for designing and managing farm ecosystems for resiliency, helping prevent further disturbance to soil, land and water when changes arise in the social system.

In its biggest usage, agriculture is the production of not only food, but also fuel, fodder, fiber and medicine. Everyone eats and because of this, they make agricultural choices that directly affect climate change, ecosystem destruction, species extinction, social justice, and racial and gender equality. Agriculture weighs heavily in all of these issues. Unfortunately, agriculture has never produced much money in its dependence on uncontrollable natural forces, commodity price windfalls, lack of everyday production (duration from input to output) etc. For this very reason, rural districts worldwide continue experiencing brain drain as the smart kids leave for better pay and the remaining ones become exploited by powerful businesses unsentimental to consistent harvests, clean water, fertile soil and family livelihoods. This is when I invite the reader to imagine robotic arms and diesel machines raking the earth’s dry derivatives of chemical-controlled waste-farms (please, let’s not talk about farm animals). 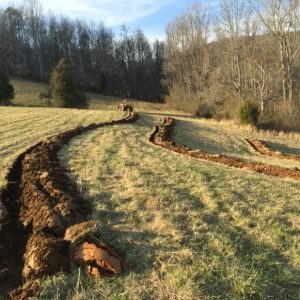 On the bright side, there is a movement rapidly gaining momentum to rehabilitate land devastated by both industrial agriculture and the pressure of subsistence economy populations. The main tool of these new land managers is the integration of production systems for maximum output while reducing inputs through an exchange of ecological services. This exchange could fill a university level agro-ecology class, so I will keep it simple and funnel words into imagination again: animals graze an improved mixture of broad-leafed plants, grass & legumes between rows of trees. These trees are of multiple distinct species, multi-strata and multi-purpose; some of them fix nitrogen and the others produce nuts and fruit. A few rows away, an electric wire keeps the grazing ruminants away from vegetables, root crops and grain also growing between rows of trees. A number of workers are trimming the lower branches of some tall-looking, fast growing tree species and spreading their leaves and branches as a fertilizer for the nut and fruit trees. Some of the tree stuff is carried away as feedstuff for animals or to be used as green manure for vegetable crops. Meanwhile–to banish any thoughts that this is a sickle & oxen utopia– the nearby tractor is loaded with chestnuts and sedately moving with its whiny diesel hiss to the cooperative mill.

For an example of this kind of system watch the video titled Syntropy from Brazil, highlighting Ernst Gotsch’s efforts there. The rate of carbon sequestration and implications for climate change mitigation & reversal is incredibly high with such an integration of production systems (E. Toensmeier, 2016. ‘Carbon Farming’). Sequestration of carbon dioxide in the soil by the action of plant photosynthesis and root exudates plus effective management (take note of this for later) is paralleled by a rise in soil fertility. This means reduction of inputs like synthetic fertilizer and chemicals.

Additionally, the production of food can be massively higher than any rice paddy or cornfield, possibly 7-10 times higher (M. Shepherd, 2013). Silvo-pasture systems that incorporate timber or orchard trees into animal pasture and contour alley cropping of agro-forestry systems are getting lots of attention. In light of this, 60 experts published an article in the UN’s Trade and the Environment Review (‘Wake Up Before it’s Too Late’, 2013) stating that despite good efforts underway, industrial farms that simply tweak their standards of production will not mitigate land degradation and climate change or be able to feed the growing populations. The article states that only integrated agro-ecological and organic systems practiced widely offer hope of both feeding the world and regenerating land and managing it sustainably. Agro-forestry and Silvo-pasture are brightly included terms in the cover letter of “key recommendations”.

My work in this field includes leading installations of multi-species orchards on three sites in Eastern North America. I am hopeful these fields will be managed for maximum production and used as education sites. Here, maximum production means incorporating nitrogen-fixing trees for coppice/fertilizer/fodder, continually re-planting them on a regular cycle, running animals in the field, and producing tree crops and vegetables crops if possible.

The first is 19 acres of pasture land in North Carolina with an existing dairy operation of six cows. The land dries out on account of being so steep, so we have dug water retaining ditches called swales to hold moisture and as a means of preparing the ground for rows of trees. Temporary electric wire protects the young trees from grazing. So far, 150 N-fixing Black Locusts have been planted, 95 Chinese Chestnuts, 40 apples and pears, 20 Hazelnuts, plus many Mulberries, Russian Olives and Persimmons and 4 experimental species.

The second site is two hours west, over the mountains in Tennessee. Ananda Arpana is a Master Unit, based on the socio-economic ideas of Prabhat Sarkar. He used this term to describe multi-dimensional centers for service, innovation and sustainability with the goal of elevating rural districts worldwide. These projects strive to create replicable models in numerous areas of human endeavor including agriculture, education and healthcare, just to name a few. At Ananda Arpana, I have designed and lead an installation of 1,200 beneficial trees on a rolling 2.9 acre field. This offers a unique glimpse of how to rehabilitate over-farmed land by establishing plantings of early, mid and late-succession trees that with a little scientific management boost soil fertility and also produce an abundance of good food for people and animals.

The third orchard is 1.2 acres of old hay field at Ananda Viplava near Albany New York. Here, the land is flat and ready for planting a large variety of fruit trees incorporating Black Locust as the fodder/fertilizer tree plus Chestnuts and hybrid Hazelnuts. This site would be ideal for an alley-cropping system growing vegetables and other annual crops between rows of trees. With its attainable plans for a seminar center and close proximity to many centers of higher education, I am hopeful that this project will help to promote agro-forestry in the Northeast.

Such integrated planting schemes using high density plantings of beneficial trees and perennial crops provide a variety of ecological services through diversity. Properly designed projects are a demonstration in how rapidly old farmland can be improved and made productive by the appropriate application of science to agriculture. This cropping pattern foretells a direct shift from dependence on annuals for all our staple foods (carbohydrates, proteins and fats) to include perennials. Perennial plants like trees grow year after year undergoing their reproductive stages of life after 1-10 years of vegetation whereas annuals complete vegetative and reproduction within one year, typically aided by farmers who eliminate competition of other plants through destructive cultivation of the soil or chemicals.

The key to maximum production is management. By proper design, dense planting, pruning and cutting the fodder/fertilizer trees, rotational grazing, and rotational cropping in between rows of trees, an efficiency of nutrient-cycling is reached that requires no inputs. Increased management ensures ongoing productive returns with the added investment in long-term fertility. In contrast, modern industrial farming is like a mining operation in the sense that it employs chemical inputs and a minimum of human management to extract crops with negative returns year after year unless added inputs are used. The soil is merely a substrate to anchor plants feeding on a chemical solution.

Many people declare that silvo-pasture is easily practiced by turning their animals loose in the forest, but this is where such simple thinking gets muddy. The colonial settlers of the eastern states did this commonly with terrible consequences. Not only did the forest offer little animal forage because the soil and plants were not prepared for browsing, but their animals often got sick. A productive and sustainable silvo-pasture system is actually an intentional process, requiring that the forages be of species capable of growing back from heavy browsing (typically grasses and forbs of European origin), appropriate for eating, and that the grazing be seasonal and rotational and not exceed recommended stocking rates of animals per unit land. Trees in this system should be managed for soil fertility as much for their production of timber, timber byproducts, fruit, nuts or medicine.

The question arises: are animals necessary? This depends of course on the interests and goals of the farm and its capacity to manage unintended growth of plant species by mowing, pruning or chemicals. The one idea that I will volunteer in this regard is that wild ecosystems always have animals of many sizes and because our goal is to create agro-ecosystems it is important to incorporate animals in order to obtain a peak of productivity and efficient cycling of nutrients. Here, scientific management means maintaining plants at the height of their bell curve by not grazing our domestic animals too early or too late. Grazing or trimming many types of plants before flowering maximizes their vegetative states, enabling them to become more productive later on. Incidentally, this sequesters huge amounts of carbon into plants and the soil as well.

It has been estimated that in the next 15 years another 2 to 3 billion hungry human beings will come to Earth before the global population begins to plateau. Without a sharp increase in the amount of farmland appropriately using science to integrate production systems, wild lands will continually be thrashed and existing farmland will continue failing to produce without chemical controls. Supporting farmers, agro-foresters and permaculturalists working at the farm scale is going to be an essential part of repairing the damage of the last century. A new vision of the natural world and a new experience of how we live becomes possible when the terms agriculture and ecosystem collide. The desperate race to save species and the last wild places of the Earth comes into focus when we understand the necessity and possibility of radically, rapidly changing the farm and forestland we’re using and abusing already, if not in the seat of a tractor then with our money and food choices. Such changes in land management with an increasing development of perennial crops may imply shifts in human dietary patterns. If you’re interested in this subject, there may be a ready market for a cookbook titled something like Food Forest Cuisine. That’s all for now, thanks for reading, you may contact me here: .

James Geoffrey Steen is an agro-forester and a tradesman. He leads workshops on nature awareness & homesteading, enjoys reading, writing, soccer, group meditation and good humor. His webpage is www.ravenridgeagroecology.com