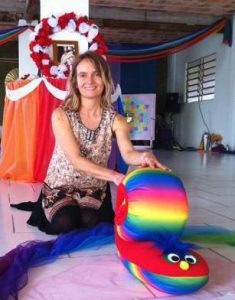 Taraka Prema Popov from Switzerland travelled to many places in Brazil in February giving NHE Seminars and Workshops as well as a TV interview and University presentation. Here is an account of her journey and work.

A five day intensive teacher seminar was held from January 30th until February 4th at Ananda Dakshina master unit near Porto Alegre, just before the sectorial retreat that took place in the same MU. This seminar was organized by Didi Ananda Sushiila. 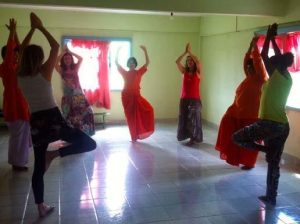 We managed to hold a strong mystical vibration throughout all 5 days of our seminar. What happened there was truly beyond words and yet, it was so concrete and obvious to all of us eight participants. Only eight? It doesn’t sound many in numbers, but lay it flat and it becomes infinite.

The training explored the qualities that we express in each and every aspect of our work and our life. We started with ether and played with its allies: time and sound. Education is a process that unfolds in time. Instead of mechanical time we should be cultivating organic time and respectfully observe the cycles of a child’s development. Everyone needs his or her own time to ripen fully. We experienced the importance of the Inner sound and respected that, in some of us, it was still asleep. Words are also sounds. How do we use them? Finally we explored the “witnessing entity” and the question Why? (why education at all? why anything?) 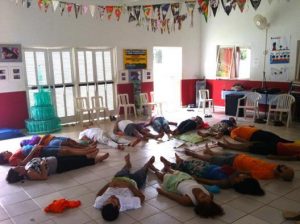 The next day we studied air, accompanied by an exploration of space, touch and the question What? We went in search of a home in nature, we gave and received massage and we felt the breath of life. How much space do we need? How much space do we give? How do we respect the space of another being? How much life energy (prana) do we infuse into education? Are we truly touching students’ hearts (Anahata cakra)? Are we fostering the expansion of the mind (vistara)?

Our fire day was the hottest of all (no wonder). Action, vision and person were the key topics as well as the question Who? The importance of leading and teaching by personal example inspired us to go in search of people who had contributed to our education making us more aware of the role we may play in the life of another. Responsibility, motivation, warmth, compassion, transformation, a burning desire to be of service to others (seva) filled our day with various activities. One of them was capoeira, a traditional Brazilian martial art form. 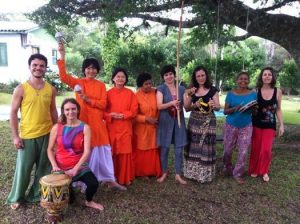 Pouring rain accompanied our day of water exploration. It was a day of flow (rasa), taste, reflection and the question How? We played with water, observed it closely, and listened to it. We practiced eye contact and discovered the principles of mirror neurons and empathy. We explored different kinds of flow and asked ourselves if our lives were tasty or not. Is our education tasty or not? We shared dances and songs from cultures that we love.

Eventually we landed on earth! How exciting was that! With the possibility to manifest and materialise all that had been just potential in all the other dimensions, we thoroughly enjoyed this very practical element. The questions Where? and When? had simple answers: here and now. The challenge was how to tap endlessness into here and eternity into now! The base chakra is the seat of spiritual power (kundalini) so we symbolically released a Kundalini snake (soft toy animal) from the sacred altar of education into the world.

After the sectorial retreat workshop, I offered a workshop in the center “Namaskar” in Ubatuba, Sao Paulo state organized by brother Nirainjan and sister Erika. The teachers had loved the yoga dance choreographies I introduced as well as the many other dances that we did accompanied by classical, ethno and mantra music. Twenty enthusiastic social workers, pedagogues and teachers took part in that workshop. They were predominantly working with youth from the Favela area. The values of mainstream society play an important role during the teenage years and teachers face difficulties due to the superficial and profit-oriented psychology that is overwhelming society and education. I have found that the best way to be a revolutionary teacher is to patiently introduce homeopathic doses of Neohumanist love into children’s lives. 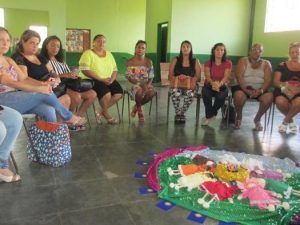 Soma Brys, dedicated teacher and the founder of “Sol Nascente”, a Neohumanist preschool at Ananda Kiirtana, a vibrant eco-community, organized a workshop for me approved by the municipality of Belmiro Braga town. It was considered “continuing education” and upon completion, participants received a certificate. Not surprisingly, it was through dancing, playing with colours, acting and storytelling that we were able to activate the spirit of Neohumanism and bring it to life.

Soma introduced the concept of the 10 ethical qualities known as Yama & Niyama, through a story about 10 corresponding fairies. Our 35 participants were truly enchanted and delighted to learn more from the abundant well of Neohumanist inspiration. 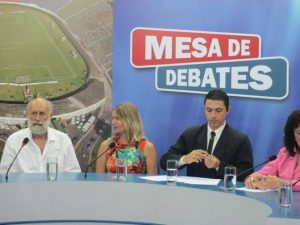 Soma Brys additionally organized a TV interview and University presentation for me. I found myself standing on the stage of the University of Juiz de Fora, one of the biggest cities in the state of Minas Gerais, Brazil. There were nearly 100 people in front of me: students, professors, the rector and important heads from the ministry of education, all eager to hear about Neohumanist pedagogy.

Before landing on the University stage, I gave an interview on a local TV program. That was a perfect way to advertise for the University class since the TV debate would be viewed by about half a million people specifically interested in academic topics. At the same time, it also afforded an opportunity to introduce Neohumanist Education to a broader audience and acknowledge the work of countless social service projects inspired by this educational philosophy. Additionally, it was a chance to discuss the International Neohumanist Education Seminar that took place last year in Brazil and the creation of the Brazilian NHE network called “Movem”. 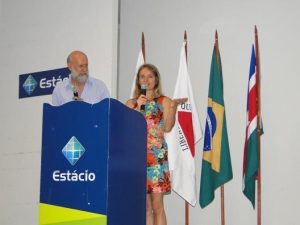 As I stood in the corner of the stage behind the podium at the University, I considered how I might best approach this lecture, knowing that my words, however intelligent, would activate just one half of the brains of my audience members, thus never providing a full understanding of Neohumanist pedagogy. And so I began: “Today’s science provides ample evidence that cognitive intelligence is just one of many different kinds of intelligences available to us humans.” My dear friend and translator, Ananta, carried the verbal message of my lecture gently but now the time had come for a major shift! I needed to bring these scholars out of their heads and into their hearts and bodies and in contact with other ways of knowing. How was I to accomplish this? I simply walked to the other side of the stage and by that action I illustrated that, after working on our verbal brain hemisphere, the time had come to move to the non-verbal half and complete the awakening of the whole person. I invited students to come onto the stage, choose their favourite colour from a stack of coloured cards and so we began to create a collective mandala. 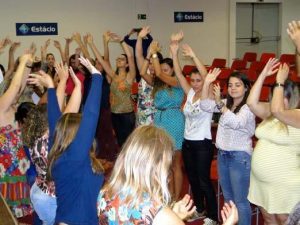 My inspiration was a beautiful mandala that a group of about 60 people had created during the yoga retreat at the end of my workshop on the “Colours of the Mind” that I had given earlier during my stay. Not only was the result great, the entire process continued to work in us for the rest of the retreat and beyond. So, why not offer this form of work here at the University, I thought. I invited the university students into my world and, before long colour frequencies were filling the space on the paper and the space in the hall. The students were fully engaged in the nonverbal, and so it was time for the natural next step: body movement through yoga dance. 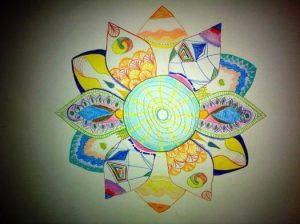 So there we were, in the university auditorium, dancing to “I’ve Got Joy like a Fountain”, a song from one of the CDs from our Neohumanist production. But this was just the warm up! The real stuff came next: more than ten minutes of “Baba nam kevalam” kiirtan by Jyoshna resounded through the University hall as we held hands performing the “snake dance”, walking throughout the auditorium, between the seat rows, and in circles and spirals…

We ended up in the middle of the room encircling a small shrine I had prepared before the class. In addition to spiritual ideation I had added a few leaves, flowers, twigs and stones collected from the natural area surrounding the University. These items symbolised the five elements: earth, water, fire, air and ether. The 5 elements accompanied the teachers training program that I offered earlier at the Ananda Daksina MU. “If that mystical vibration can enter now, the University students will touch the point which is the core of our NH educational experience,” I thought to myself. 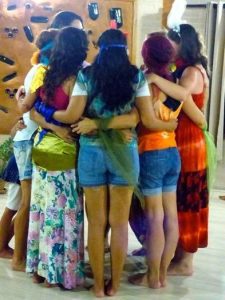 As our work unfolded that day, the intensity of our encounter increased. The profound feeling of the web of life surrounding us and streaming through us caused our hearts to overflow. Our heartbeats united us with each other, with our Mother Earth, and with the pulsation of the Universe (oh, yes, that is where the word university comes from.)

We were embraced in the circle of education, the bridge between the individual body, mind, spirit and collective nature, culture, community. What could be more exciting than being an educator of that kind?

As the university class came to a close, nobody wanted to be released from this wonderful embrace. In another dimension, we can hold on to this feeling forever but in the here and now I had to say goodbye. 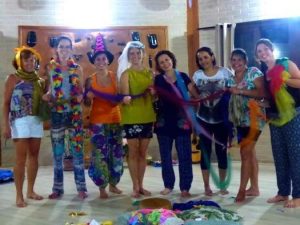 The next stop was Pontal do Sul where I gave a workshop on “The Mystical Beauty of Fairy Tales.” Still aglow from my exciting experience at the university, as I travelled to Pontal do Sul, I could already envision the participants choosing their own fairy tale cards and embarking on a journey of archetypal exploration. I saw all of us creating our own wonderful new story and performing it with costumes, masks, music and props on the stage of Anirvana, a center run by my amazing friend Tannistha. Thanks to the contribution of a wonderful group of participants, the actual workshop was even more satisfying than my imaginings.