Personal Development of the Teacher – Holland 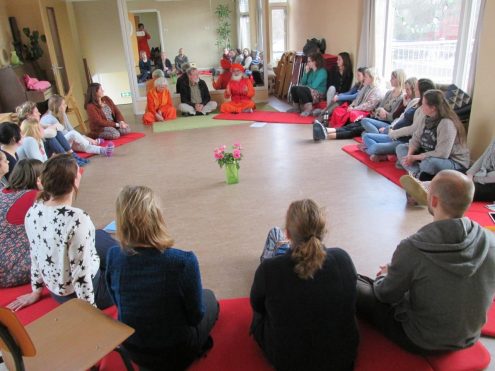 A three day teacher training was held for the teachers of Zonnelicht School in Den Bosch Holland in Febraury. It was conducted with approximately 25 teachers with varying levels of experience with yoga and meditation. The trainers, Didi Ananda Devapriya, Didi Ananda Rama, Dr. Jordan and Dada Gunamuktananda focused on the teachers acquiring greater self-knowledge and balance of mind, body and spirit.

The first morning, began with Yolande Koning, the director of Zonnelicth giving an overview of the training which aimed at what teachers had been requesting, to go deeper with their own spiritual practices. Didi Ananda Devapriya conducted a meditation and yoga class followed by the Kaosikii dance three times a day. The first day’s training gave the teachers three choices among which they could attend two consecutive sessions: Didi Ananda Rama’s Food and Fasting workshop, Didi Ananda Devapriya’s workshop on a variety of kiirtans and Dr. Jordan’s experiential workshop on Intuition as Guide in Making Loving Assertions.

In this workshop, Dr. Jordan had the teachers first discuss the role of the intuition as a guide to the ego in making benevolent assertions. The participants were then asked to visualize situations, as though they were happening in the present, in which they had been less assertive than they wanted to be. Recruiting all the multisensory details of that situation and attending bodily sensations and feelings they experienced, they were asked to come to the meaning of the situation for them. They were then asked to let go of the scene and focus on their breath and relaxation followed by meditation on their breath and mantra for a minute. They were then instructed to return to the former scene and visualize themselves at the point when they felt less assertive responding 1. spontaneously 2. plausibly and 3. in a manner that benevolently served them and others. After the intervening meditation and application of spontaneous, plausible and benevolent imagery a few participants shared that they were able to be less reacted emotionally and more positive in their assertions. One person said that not only their emotional reaction disappeared but that they felt at peace and had no need to assert anything.

In the afternoon Dada Gunamuktananda gave a talk using the metaphor of mycelium in the earth to illustrate the interconnectedness of all entities and the fundamental unity of the animate and inanimate world. One of the most poignant points he made was that the nurturing quality of neighboring trees was facilitated by the connective organic material via the mycelium network to exchange nurturing minerals and water with neighboring plants – an example of healthy symbiosis for all beings.

The theme of Clash and Cohesion was introduced as reflected in the Rumi poem, Guest House – “Even if they are a crowd of sorrows, who violently sweep your house empty of its furniture, still treat each guest honorably. He may be clearing your out for some new delight.” The theme of seeing the silver lining in times of crisis was further amplified with the story of “Good Luck, Bad Luck” which turned every disaster of a farmer and his son into a blessing.

The teachers then joined in an art exercise that had them draw on four quadrants of a page, with crayons and art materials, four emotions that they had experienced. They then were asked to turn the page over and draw a synthesis of these four emotions on the other side. They then joined in groups of six to discuss the impact of synthesizing positive and negative emotions in their drawings. The morning ended with them visualizing an event in their lives that at first had the impression of being a disaster but turned out to be a blessing in disguise. After contacting the visual imagery, their bodily reactions and the felt meaning of this event they milled about the center of the room and randomly chose a partner with whom to share their story. The afternoon began with reflections on their experiences from the Clash and Cohesion exercises. Many felt that it was about finding “their own voice” that makes use of “radical acceptance” and determination to overcome all obstacles in achieving their goals.

They were then asked to journal in a “free write” style which encourages responding to a prompt by writing spontaneously without editing; expressing freely your thoughts for 2.5 minutes. The prompts were:

Many of the teachers comfortably shared in the larger group the results of their journaling.

The day ended with reflections on the value of getting out of their heads aided by the multiple modalities of art, visualization and meditation moving from dealing with synthesizing their emotions and experiences with the help of their peers to identifying their heart felt desires. In the evening they had a fun frolic of an outdoor treasure hunt.

The day began with a film, “Schooling the World” which reflected the imposing of a western approach to education on the rest of the world without sensitivity for local culture. Didi Ananda Devapriya then raised the question of “what are we educating children for?” This discussion explored the broader vision of how we as educators must, as Gandhi encouraged, become the change we want to see in education.

This third day of training focused on how to acquire positive qualities of leadership in teachers. In a brainstorming exercise led by Dr. Jordan, teachers identified positive qualities of teachers as leaders that included expanded vision, empowering others, service, strong intuition, and empathy. The teachers worked in small groups of five to explore these five qualities of leadership. When the question was raised, could these qualities of leadership become a liability, the teachers recognized the need to have a balanced approach that was intuitive and sensitive to time, place and person in applying these qualities. The larger group concluded that the development of these leadership qualities would be aided by continuing education similar to what they were getting in this three-day training. They affirmed that this holistic training at a physical, mental, emotional, social and spiritual level would support them as teachers, leaders and models of a healthy life style. A few cooperative games were then performed in their small groups.

Didi Ananda Devpriya then focused on strategies that teachers, students and educational institutions could embrace to more effectively implement the needed change to accomplish excellence in education. Two films were shown that dealt with developing “determination” and “multiple strategies” to produce change. The first film, “Will as a Skill”, demonstrated that “will” could be taught. This training was based on the earlier “Marshmallow” research of psychologist Walter Mischel, who demonstrated that delay of gratification which strengthened “will” could be successfully taught. This education produced stronger “will” in youth that was retained when the same subjects were tested 40 years later. This study demonstrates the long-term effects of early childhood education.

To demonstrate these principals of the use of multiple modalities and strategies in the teacher training we applied yoga postures, meditation, chanting, brief talks, films, visualizations, art exercise, improvisational drama, stretch breaks, journaling, self assessment charts, dyads and small groups to share the personal impact of exercises, and large group reflections on the impact of training. One example of a self-monitoring chart that Didi Ananda Devapriya shared with the teachers was a Ten Day Yama Niyama Challenge that utilized a10 point scale to rate the minimum to maximum application of the yoga ethic principles. Another example was the use of a multiple strategies chart to monitor your progress on behaviors you wanted to change.

The training was a holiday for the teachers, providing a break from teaching and an opportunity for enjoying each other’s company, away from their daily routines. Most of all they felt it gave them an opportunity for deeper exploration of their individual needs to grow together socially, emotionally and spiritually. They shared much personal gratitude for each other. They complemented their leader and founder of the school, Yolande, for continuing to make this type of training possible for them. They thanked the leaders for being sensitive to their needs. For the trainers, it was a privilege and an honor to spend these days of training with the teachers and staff of Zonnelicht School during the Lotus Teacher Training.

Afterwards, Didi Anandarama gave an extra workshop to a dozen teachers on how to make a 16 page story book. Each teacher came up with their own stories and illustration styles and started to make their own book to show it as an example to the children. They were very enthusiastic and creative, well versed with story telling and looked forward to their finished product and to facilitate the same with afterschool children. 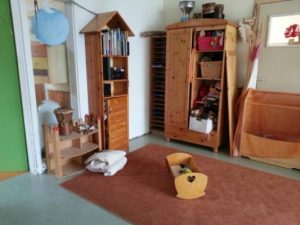 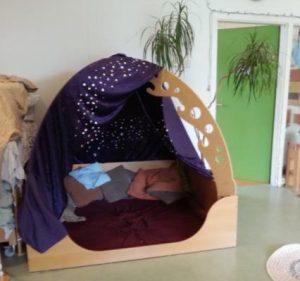 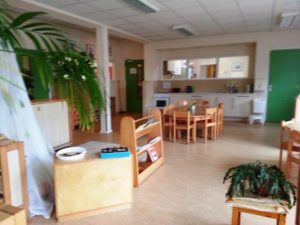