Networking in the Wider World 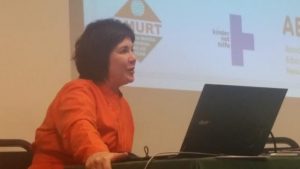 In October, the International Step by Step Association (ISSA) organized a conference for early childhood professionals with the theme “Early Childhood in Times of Rapid Change” that took place in Vilnius, Lithuania. The conference explored four main strands: Meaningful Learning for Children, Meaningful Preparation for the Workforce, Meaningful Support for Families and Meaningful Use of Technology. The conference sought to address the experience of rapid changes facing societies around the world, bringing together experts, researchers, practitioners, policy makers and NGOs to discuss these themes in a variety of interactive sessions. There was a particular emphasis on the refugee crisis and several presentations shared strategies on addressing the needs of children and families affected by displacement and the traumas of war, natural disasters or economic crisis.

I was invited to present two Neohumanist Education projects: The “Pathways to Education” project for Syrian refugee children run by AMURT Lebanon, and the “We All have a Story” project promoting inclusivity in early childhood education that took place in Romania. I was able to participate, thanks to support from the Zonnelicht School in the Netherlands. It was an excellent opportunity for Neohumanist Education approaches to gain visibility amongst leaders in the field, as well as to learn about innovative new developments in ECE and create new networking connections with like-minded organizations and people. A Dutch organization was particularly interested in exploring collaborations in working with refugees. Connections were also made for developing further projects in the integration of severely marginalized Roma communities.

A new term that was repeatedly used in the conference was “Generation Touch” referring to the impact of touch screen technology on children who are growing up in a world where they expect every object to perform like a screen, responding instantaneously to touch. This phenomenon was explored in several of the presentations I attended. Generally, there was a consensus that technology should scaffold and support, rather than replace other types of educational interventions, and that its use should be very limited in the earliest years of a child’s life, as it can affect neurological development. In her keynote speech, Professor Liz Goodman, who teaches “Inclusive Design” in Dublin, also described innovations in the use of technology to support the inclusion of special needs children, such as an invention that allows paralyzed people to move a mouse with their eye movements. Technology can assist in personalization of services as “one size fits one”.

I particularly enjoyed a lively peer debate on the appropriate use of technology in Early Childhood Education. I was expecting to listen to a panel of experts debating the pros and cons of technology, so I was quite taken aback when I walked in through the door and the moderator asked me whether I was for or against the use of technology in Early Childhood Education; I answered “It depends…” but we had to all choose a stand and then go through a formal debate process. I ended up on the anti-tech side and argued that the most important piece of technology we must teach children to master is our own body, heart and mind. However, in reality, I recognized that technology is very difficult to avoid, and it is simply a fact that we must learn to deal with it in appropriate ways. Another conclusion, that was also mentioned several times in the course of the conference, is that the increase in screen time, needs to be balanced by increased conscientious attention on developing empathy and relationships.

Another keynote presentation, by Nicholas Burnett, introduced the Lancet Series, with the theme “Advancing Early Childhood Development: from Science to Scale”. The journal is a prestigious medical and scientific journal, which has gathered evidence to quantify the impact of Early Childhood Education. The study shows that “children who are not nurtured properly in the early years may forfeit a quarter of their earning capacity as adults. The Series provides a roadmap to successful interventions in early childhood, along with evidence that such interventions contribute directly to ending extreme poverty, boosting shared prosperity, promoting healthy lives and learning, reducing inequalities, and maintaining peaceful societies.” The findings from the Lancet series emphasize ” ‘nurturing care’, especially for children below three years of age: multi-sectoral interventions starting with health – which can make a profound impact on families and young children through health and nutrition.” Dr. Burnett made a comparison with climate change – that a change in our individual behavior will not seem to have any impact in the short term, but unless we take actions now, we will all have much worse problems in the future. Indeed, the Lancet series evidence has already proven useful in convincing policy makers to include investments in Early Childhood Education in order to reach the UN Millenium Goals to eradicate poverty and also on national and local levels.

The conference concluded with the screening of a new documentary video “The Beginning of Life” which similarly can be very useful in supporting efforts to convince parents, policy makers etc about the importance of investing in Early Childhood Education.