Didi Ananda Uttama, based in Greece, has been an NHE teacher and trainer focusing on the importance of the primal period, from conception to the first year of life of an infant. As the refugee situation in Greece became critical, she and her team turned their attention to providing basic survival services to mothers and babies in need. In times of crisis, all NHE teachers become service providers – in this case, AMURTEL workers. The following is a report from her on this work. 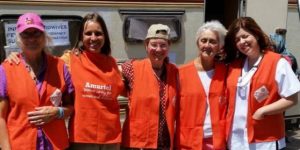 When the waves of refugees started rolling onto Greek shores, some of the women on our team and myself wondered what we would do if we were mothers-to-be or mothers of infants in this terribly uprooted and fragile situation. We knew that 20% of women of childbearing age in any given situation are likely to be pregnant and that birth outcomes are far more complicated in disaster situations. We knew that these mothers and infants could not access regular health checks, proper food or shelter, or family support that they would have had at home. We knew that infants in these situations are at enormously greater risk of acute and ultimately chronic health problems. We knew that breastfeeding is one of the most crucial protections an infant can have but that too many mothers misguidedly abandon it en route in favor of formula feeding. We knew that formula fed infants, due to the lack of proper facilities for accurate, hygienic bottle feeding, have drastically increased incidences of respiratory and gastrointestinal infections. 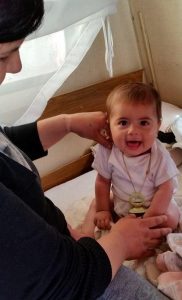 The decision was obvious. We had to do something. Gathering volunteers from local midwives, doulas and breastfeeding specialists, we dusted off our relief skills and set to work. This was in August, 2015. For the next five months, the AMURTEL team, together with LaLeche League volunteers, visited the camps in Athens regularly to assess and assist. It rapidly became clear that pregnant women and mothers with infants were not getting the care they needed. None of the camp medical units had midwives or doctors trained in OB/GYN. None at that time had Mother-Baby Areas, support for breastfeeding or help with safe formula feeding. Going from family to family, we did what we could on an individual basis. We saw woman after woman who was dazed, shell-shocked from the trauma of the trip, worried and afraid for the welfare of their children. Our days were filled with sitting with them, talking, reassuring, having the midwife do a pregnancy exam, supporting their infant feeding habits and giving assistance in whatever ways we could.

We needed a base for our work but the managers at the camp were strained and pushed to the limit. Just the mention of a space for a Mother-Baby Area was thrust aside as being impossible, not at this time, not a priority. When soon after this the northern borders closed and the port turned into a camp, we migrated there and set up in a small but manageable old caravan. It was not the Mother-Baby Area we would have hoped for but it was a start.

Six months passed and by the time the port camp closed at the end of July, our base had extended into a second caravan and a tented area between the two. Mothers came to be examined by midwives, assisted by breastfeeding specialists, and greeted by the volunteers handing them supplemental food or carrying water for them to bathe their babies. They smiled when they saw us, gave us hugs and thanks though, to be truthful, it seemed we did so little. Mostly we were simply there. They could count on that and in times of shifting, unstable ground, that may have meant a lot.

What did we see in the last ten months? Women going into premature labor and having babies in strange, unfamiliar environments where no one in the hospital even spoke their language. Women miscarrying and going through the grief of losing a child without family around them, living in a small, hot tent put up on a concrete floor amongst thousands of strangers. Women coming for pregnancy tests, some hoping against hope for a positive result, some desperately not wanting to have a child in this crisis situation. Women worried because their one and two year olds had so little to eat, the camp menu not providing anything particular for this age group. Women delighted to be told that their instincts about continuing breastfeeding were the best for them and their child. Women who, having believed the myth that stress decreases breast milk, talked with our counselors and found themselves having plenty of milk and their infant no longer seeming endlessly hungry.

We saw women who came again and again, day after day with smiles and thanks. The graciousness of these women humbles me all the time. I wonder often if we, as privileged westerners, would be so kind and gracious if the roles were reversed.

And now we are in the process of setting up a Mother-Baby Area in downtown Athens where our services will be available not only to the more than 4000 refugees in urban accommodations but also to those in the camps around Athens. The future of the 57,000 asylum seekers stranded in Greece is unknown. Some will be able to migrate north legally, many will go illegally, and many will be in this country for a long time. But one thing is sure. Babies will still keep being born, mothers will still keep needing support, and so our work goes on. www.greece.amurtel.org