Sentiment and Intuition in Neohumanism

Sentiments are fueled by emotional energy and are a powerful motivational force behind human behavior. Yet emotional energy, like other forms of energy – is a blind force in itself, and thus emotions and sentiments on their own, are not reliable guides to action. However, when the raw, powerful energy of emotion is harnessed and guided by rationality – it transforms into one of the strongest forces of the universe.

During human development, it is natural and inevitable that different sentiments form and create our sense of belonging and identity as members of different social communities – our family, our school, our friends, our nationality, our gender, etc. We form a positive “in-group” bias for those that we perceive to be similar to ourselves, and there is a sense of “other-ness” and “out-group” bias for those that are perceived as outside of our circle. Sentiments of inferiority and superiority emerge from these types of experiences and form the basis for stereotypes, prejudices and exclusion.

However, Neohumanism challenges us to use the instrument of rationality to overcome our biased sentiments, and continually expand our sense of identification and inclusion in an ever-widening circle, until we are able to identify ourselves with the universal essence of all. The awakening of devotional sentiment – or the feeling of love towards the Divine – is one of the highest expressions of human sentiment. It is also one of the most intense feelings we can experience, capable of inspiring ordinary human beings towards acts of incredible courage, sacrifice and nobility. Yet, even devotional sentiment, if not directed by rationality, can become a blind, destructive force. Indeed, how many wars have been fought, and lives lost, supposedly in the name of God or religion? Shrii P.R. Sarkar, the founder of Neohumanism, explained that devotion without rationality is one of the most dangerous forces in the world, whereas rationality without devotion leads to materialistic degeneration. On the other hand, devotional sentiment, directed by rationality has extraordinary transformative power, on both individual and social levels.

The main factor that differentiates rational thinking and decision making from sentimental impulse is the use of the discriminating faculty of the mind, or conscience, to regulate emotions and direct them with our willpower. Sentiment tends to propel the mind towards action without the intervention of conscious thought. Indeed, in sanskrit, the word for our various types of emotions, linked to different glands and cakras in the body, is “vritti”, which translates to propensity – that which “propels”. These vrittis can propel us towards endless whirlpools of desires, or towards subtle experiences of divine realization. It is through the activation and application of conscience, by taking the help of ethical principles such as Yama and Niyama, that we are able to channelize the blind energy of vrittis and sentiments towards their highest expression.

Viveka and Intuition – the Inner Guide

When this faculty of discrimination is guided by benevolence, it is known as “viveka”. Viveka originates deep within the mind, from the vijiṋánamaya kosa, or wisdom layer of the mind. There are, in fact, a total of three subtler layers of the mind, beyond the intellectual layer, which form the intuition. The transcendental knowledge and feelings that flow from the intuitive layers of the mind emerge from the expansive, all-knowing source at the nucleus of our being, rather than from the limits of our rational intellect. The more that we cultivate the connection to our source, through the regular practice of meditation, the more that we purify and clarify all of the layers of our mind. This allows the divine light of the soul to illuminate our mind and guide our intellect through the faculty of viveka. The daily practice of meditation can be compared to scrubbing layers of accumulated grit off of a window, so that it can regain its transparency and allow the rays of sunlight to pass through it easily. The ultimate role of viveka is to guide our emotions towards Ista – our divine essence. When rationality is grounded in universal truth, and takes the help of clear principles, to keep on track, it leads to welfare. This is called awakened conscience.

It is one of the functions of the intellectual layer of the mind, called manomaya kosa, to explore and evaluate the truth of different ideas. At this level, rationality and discrimination takes the form of scientific enquiry and analysis based on logic. However, ultimately, subtle truths cannot be experienced only by the intellect, but must be realized by the intuition. On the other hand, if we use the faculty of logic and rationality, without grounding it in universal truth or connecting it to our “vivek” and intuition, but rather limit its scope to relative, objectively observable truths, we also limit our full potential for wisdom and understanding. Our senses are quite limited, even when enhanced with special instruments and thus the knowledge gained in this way will always be somewhat incomplete.

Desires at the root of negative emotions

Coming back to understanding emotions, it is our desires (kama) are often the root of negative emotions. When desire is blocked it can cause anger, frustration, or depression. Envy arises if we see that someone else is getting something we want and are not getting.

On the other hand, when desire is fulfilled, there is a certain satisfaction and happiness, but it is temporary, and the fulfillment of desire can create pride, increase ego, and lead to attachment, which is the fear of losing the perceived source of fulfillment. It also can stimulate the greed to have more and more. So whether desire is frustrated or fulfilled, both directions are problematic for achieving lasting peace and happiness. 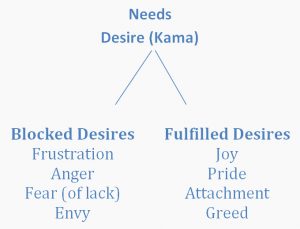 However, when desire is directed towards the unlimited Divine rather than the limited material or even intellectual level of existence, devotional sentiment arises. This expression of sentiment or emotion does not lead to negative emotions, rather it elevates and brings a type of bliss that does not depend on external circumstances.

While one of the characteristics of intuition is that it operates beyond the conscious, analytic layer of the mind, there is also another type of impulse that we can receive from beyond the realm of conscious thought. This is instinct, which unlike intuition operates from a much cruder layer of the mind, known as kámamaya kosa. Indeed, sometimes we can confuse the strong, compelling urgency of an instinct with intuition, and justify our actions as being intuitive.

How then to differentiate whether an impulse is coming from intuitive wisdom or instinct?

The mind has five layers (sensory, intellectual, creative, intuitive and blissful). The layer of mind that interfaces with the external environment is called the kámamaya kosa, the layer of desires. The senses bring information from the external world in contact with the mind, which forms desires that then cause the body to act through its motor organs in order to fulfill the desire. There are four basic survival instincts that operate in this layer of mind – they are hunger, sleep, fear, and reproduction. It is not our subtle intuition that causes us to be infatuated with a potential mate, nor that tells us to sleep in late, or to avoid danger – rather these come from the instinctual level of the mind. These instincts are designed to keep us safe and healthy, but must be filtered through conscience. It is quite problematic to follow such instincts blindly without engaging a deeper process of discrimination. In fact, the very process of utilizing the power of discrimination activates intuition.

On the other hand, the suppression of instincts and desires is also very problematic and unhealthy. Rather, they must be channelized and directed. We can choose to either be the “captain of our ship” or to allow ourselves to “go with the flow” of instincts and desires. A skilled captain is much more likely to reach the destination in a reliable way than someone who is allowing the ocean currents and random winds to sail the ship in the easiest, but most haphazard, way. That “still small voice” of the conscience, provides us with a compass to navigate the stormy seas of desires and instincts. With practice and sincerity, that compass becomes an increasingly trustworthy guide to action.

There are three ways we can channelize our instincts and desires:

1. Inner work through meditation – by redirecting our energy towards self-realization

To enter in contact with our inner, guiding self, we do not need to eliminate all desires, but rather to cultivate a strong, single-minded desire to experience that contact. Meditation also cultivates the ability to detach from reactive thoughts, and develops the ability to listen to our deepest Self.

2. Outer service in the world – by developing an attitude of unconditional service to all.

The effort to transcend selfishness through the opportunity to offer service to the world and those around us in need, is another way to successfully purify the mind. Service allows us to overcome self-centeredness and experience a love that is not conditioned on what we hope to receive, but rather focuses on giving. Indeed, love is not something that we can seek to gain and keep for ourselves, but rather a divine energy that flows through us. By emptying our personality of selfishness, we allow ourselves to become like a hollowed out reed flute, an instrument. The Divine then flows through us, like the wind through a flute, producing beautiful music. As we learn to release the compulsions of our ego, and open up to becoming a Divine instrument, we allow the magic of “krpa” or “Grace” to happen. A classical part of the spiritual path consists in exploring this question of how to let go, open up and allow the Higher Self to work through us.

There is another way we can distinguish between genuine, transcendental intuition, and other types of impulses tarnished by the fears and personal desires that originate in the ego layers of mind. The characteristic of intuitive knowledge coming from the transcendental Self is that it directs us towards universal welfare, compassion, selflessness and other noble, expansive qualities. Instincts, ego desires and other lower expressions of emotion will lead us towards self-interest, attachment, pettiness, exclusion, aversion, fear and other limiting, contracting qualities. So, by observing the qualities that different emotions and non-linear thinking bring into our lives, we can deduce whether their source is truly Divine, or rather our thinly veiled ego.