Technology and Spirituality in Uncertain Times 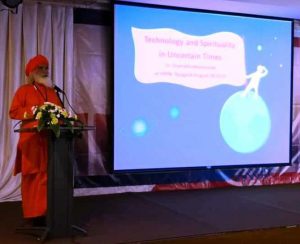 When prehistoric humans separated from their non-human ancestors, they had not even the slightest inkling that one day their descendants would touch the stars, split the atom, discover the genetic codes that carry the secrets of life, communicate through a rich vocabulary, unravel the mysteries of brain, fathom the invisible via nanotechnologies and make innumerable other discoveries and inventions. The progress that human beings have made in the past few thousand years is indeed impressive. Of course, there is a lot more yet to come and we should not be surprised if human ingenuity can create entities that are far smarter than ordinary humans but possess little or no human consciousness.

The possibility of the decoupling of intelligence and consciousness raises interesting questions for futurists. To what extent can human consciousness be transferred to humanly engineered robots? Will the institutions of family and religion still continue to exist? Will the designer babies have independent thinking or merely display ‘programmed smart thinking’? Will robotic consciousness mar the distinction between modern-day humans and humans of tomorrow? How will our sense of meaning and purpose of life evolve over time? Will the society of the future have any moral dilemmas? How would religious, political, social and educational institutions respond to the challenges posed by advancements in science, technology and evolving consciousness? These and many other such questions linger in the minds of modern day futurists and policy makers, and invite a response.

From what we already know, we can say that human consciousness is far from being replaced by AI or robotic consciousness. Humans, as an embodiment of omniscient divine consciousness, continue to act as self-controlling entities. The future of humanity remains optimistic and resplendent as long as humans are guided by higher wisdom and compassion. If it surrenders at the altar of narrow sentiments, it may find itself in chains and in a degenerated condition.

A Shift from Information Scarcity

One significant aspect of the technological revolution of today is the virtual elimination of information scarcity. Rather, the problem is just the opposite. We have entered the age of information overload. Today, as information becomes abundant and readily accessible, it is consuming our attention as well as our greater energy. Information is being given away free of cost through open software. Educational institutions are no longer mere agencies of transferring information. Universities are beginning to redefine their raison d’etre in terms of degrees of ‘authenticity’ of knowledge besides stimulating creative thought and mastery of some chosen discipline. The wealth of information has, however, translated into poverty of attention on a global scale. The lack of attention is posing problems in acquiring deep inner knowledge, values and wisdom. An unbearable weight of informational overload, fake news and unauthentic or questionable knowledge solicits a stamp of legitimacy, and information consumers are ready to pay a price for it. Nonetheless, access to wisdom-centered lifestyle, exemplary role models and abundant renewable energy are likely to be in increasing demand for attaining greater inner fulfillment and collective flourishing.

At this critical juncture, Asia, too, is impacted by certain global tensions:

A Cry for System Overhaul

When the rallying cry of “equality, liberty and fraternity” was sounded on the eve of French revolution over two hundred years ago, no one expected that it would stir the ‘conscience’ of the world and trigger massive changes in Europe and beyond. Even as early as 1215, the Magna Carta was signed to correct the injustice of economic and political centralization. Whenever injustices reach their climax, an overhaul of the system becomes the pressing need of the day.

Conditions today are not much different, as unimaginable disparities abound and increase, decade by decade. Economic and political power today is backed by the indisputable strength of digital technologies. We are also witnessing a flagrant display of socio-psychic fragmentation brought about by fear and selfish interests. It is just a matter of time before the thin veil of mass discontent, helplessness, and hopelessness erupts due to the inner vacuum caused by insensitivity to one another and the lack of genuine love of humanity.

The time is indeed drawing nearer for value-oriented intellectuals to establish a united front of all the enlightened people in order to spearhead citizens’ movements for deciding our common future and to speak with one voice for “Cosmic Kinship, Justice, Freedom, Self Reliance and a Healthy Lifestyle”. Perhaps, APFN—Asia Pacific Futures Network—and the Global Neohumanist Education Network could be such forums to foster these cardinal values.

TOWARDS A 2038 VISION OF RESILIENT ASIA

A) Economic Self Reliance and Sustainability

First, we must never lose sight of the fact that all beings crave all-round emancipation and freedom. Individual liberty and collective interest must always go hand in hand. The only system that can ensure lasting freedoms is a system built on communal self-reliance, where every community is resilient and sustainable. The welfare of one is the welfare of all and vice versa. The socio-economic system must give primacy to minimization of disparities in all walks of life through a balanced economic system. There cannot be a world without violence unless we accept the “universalist mindset” where all beings—animate and inanimate, as embodiment of divinity—are treated with love and respect and their existential and utility value are recognized. Today, economic inequality is threatening to translate into biological inequalities. Thus, while making the maximum utilization of human ingenuity, we must ensure the survival of diversity on this planet.

Diversities add to the beauty of creation while disparities take away the possibility of the creative expression of the unique capabilities of each entity in this creation. In this regard, Rev. P R Sarkar, a spiritual leader of India and His Excellency Bhumibol Adulyadej, the late venerated king of Thailand, had put forth a model of economic self-reliance. Asia needs to look towards its own cultural ethos rather than blindly following the western model of capitalism. Asia’s future hinges on how soon it can go back to an economic philosophy based on economic self-reliance and resilience. World history is rooted in injustices to various inhabitants of this earth. So unless we make ‘justice’ the cornerstone of massive changes on the planet, permanent peace and harmony can never happen. The Magna Carta signed by the King of England in 1215 was an attempt to rewrite the rules of the game by which ordinary citizens were being governed. It never went far enough and the world today is once again ruled by a few. Economic power is centralized once again in the hands of the few. A system which allows that to happen, is once again inviting new rules of the game. A neo-magna-carta* is long overdue.

*Neo-magna-carta as propounded by Shri P R Sarkar asserts that:

Second, without love of cosmic kinship as the foundation, no lasting changes can ever be made. Universal love is the only truth and common religion of all humanity. This love transcends boundaries of family, community, nation, species and even distinction between animate and inanimate entities. That, incidentally, is why Neohumanist Education* is of paramount importance and deserves the attention of all well wishers of humanity. Today’s children are tomorrow’s adults. If their minds are trained in loving and expansive directions, they will create a loving and expansive society.

*Neohumanist Education is a system of education based on the philosophy of “LOVE IN ACTION”.From 0-6 years, the emphasis is on creating a strong base of love in the child; giving particular attention to development of all levels of awareness; and enabling each child to feel safe, secure and fully connected with all.From 6-12 years, the focus is on deepening the inner tranquility, ecological awareness and ethical life style; cultivating meaningful social-relationships; discovering unique talents in each child and giving the possibility to express them for collective benefit; nurturing the curiosity of children through knowledge, skills and service, in order to create a better world;From 12-18 years, the emphasis is on helping the youths to further connect with their deepest inner self; develop a greater political and economic awareness; understand life purpose and cultivate healthy life style habits; foster idealism and adventurous spirit; encourage undertaking of challenges to solve real life problems; display leadership qualities, and, experience blissfulness and joy through arts, culture and music. Neohumanist Educators are established in the spirit of neohumanism, have acquired the pedagogic abilities and reflect neohumanist values in their actions, teaching and guardianship. In addition, they also have a clear understanding of what makes a human society, challenges facing the society and a clear vision of what would make for a peaceful and progressive world.

Third, we need a lifestyle that frees us from dependence on the external material world for the pursuit of happiness and inner fulfillment. That can only happen if we look for the source of infinite happiness within, through the use of intuitional-knowledge (para-vidya) as the modality of self-realization. There can be no freedom for all without balancing individual liberty with collective interest. That can only happen when we take control of our propensities and practice the yoga of restraint. A society without moral foundations is not worthy of being called a human society. Human beings must reflect higher values beyond those at play in the animal kingdom. Violence and self-gratification are common to the animal and human kingdoms, but kindness and living for others are traits of developed beings. Hence, human society must reflect justice, magnanimity and compassion in all its affairs. Cosmic kinship and universal love are the hallmarks of a developed civilization. Asia’s future must be built on its cultural strengths and not on borrowed materialistic ambitions.

D) Religion, Science, Technology and Arts for “Service and Blessedness”

Fourth, The science, technology, arts and religion must be subservient to universal wisdom and ethics-based society. If science and technology become only instruments of material profit, the collective welfare of the society would be sacrificed and ultimately, the very purpose of science and technology would be thwarted. Knowledge must be used for service and universal welfare rather than as an instrument of material domination, control or destruction. For instance, Thailand, guided by the philosophy of Buddhist economics, is one of the countries in Asia which has launched a renewable age-revolution by developing technologies in the field of renewable energy storage and could help all of Asia and the southern hemisphere to tap its abundant solar power for developing infinite energy resources required for a sustainable society. India and China have also launched massive initiatives towards economic self-reliance, but the effort is not enough.

Will the darkness of the night give way to the effulgence of the crimson dawn? Will there ever be an end to the humiliation and tortured condition of humanity? Indeed, that is the throbbing of every heart of well wishers of Asia and the world.

Asia’s dream is to create:

A world without fear;
A world of harmony among all species;
A world where purchasing power of one and all is constantly increasing;
A world where ethics and morality are the foundation of personal and social life;
A world where arts, sciences and technology are subservient to greater welfare;
A world where creativity, imagination, aesthetics and fine arts find their fruition;
A world where religion and spirituality affirm universal kinship and rationality;
And, a world where Universal Love and Divinity reigns and pervades!