Economic Renaissance in the Age of Artificial Intelligence 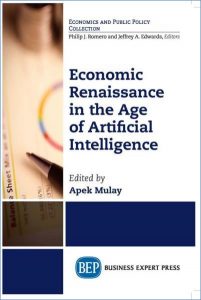 Apek Mulay has edited an intriguing book. It draws on the foundational work of Indian mystic, macro-historian, and philosopher, Shrii P.R. Sarkar. Almost 60 years ago, Sarkar began the process of envisioning and creating a world after communism and capitalism. Communism has largely disappeared as a vision of the future, while crony capitalism appears to be if not at its end, certainly in its dying stages as inequity continues to increase within nations and between nations. Sarkar imagined a world with far greater efficiency, far greater productivity, far less inequality, living with nature and enhanced by amazing new technologies—“mind in technology” if you will—“what we know today as the beginning of artificial intelligence (AI)”. This would be a planetary civilization where the boundaries would be functional not sentiment-based as in today’s nation-states. However, this was not a utopian vision in that it was a no-place, but a Eutopian vision, a good place. Contradictions do not magically disappear; however, exploitation decreases and the world gets better and better.

What seemed far away 60 years ago no longer seems distant. Discussion of global governance, a universal basic income, an Internet of everything, dramatic advances in robotics all challenge the current world capitalist system and the mindset that sustains it. But how would this system actually work? It is this question that many contributing authors seek to answer. What would a universal basic income look like? Is it even possible? Would it create security or a culture of incapacity? What legislation is required to encourage cooperatives? Do we need a global constitution? How do we create an economy where the “money flows”? Can we, should we, move from dark green to bright green (ecology with AI), or more important, are structural changes in the world economy. These and many other similar questions are tackled and answered by the contributing authors.

This book is rare in many ways. First, as suggested earlier, it fills in the details to Sarkar’s alternative vision of the future where technology creates less inequality with higher productivity. Second, it takes macroeconomics seriously. Mulay is an economist and to his credit, he has created a community of thought leaders who move between economics, sociology, law, and futures studies. (Among the co-authors of the book are Navin Doshi, Dr Shambhushivananda, Steven Richheimer, Craig Runde, Matt Oppenheim, Stephen Willis, Roar Bjonnes, Michael McAllum, Shrikant Shete, Sreeniva Adiki and Satinder Paul Singh.) Issues of taxation and the employment implications of robots are not lost sight of. Indeed, solutions from new taxation regimes to blockchains to constitutional amendments are offered. Also inner issues, for example the implications of meditation and spiritual consciousness on post-capitalism, are met head on.

Thus, the text both attempts to optimize our life in current reality—the world as we know it—how can we create more value for all, how can we be happier, and how can we create a more just planetary civilization after capitalism. The present and the emerging possible future are both addressed.

This is a unique time in our human history. There is much to appreciate, even though horror is everywhere. As we transition to a new society we need visions and operational suggestions as to what to do next.