At a recent conference in Australia, I had the chance to experiment with gaming and creating progressive policy futures by running the first Prout Parliament Game. The core question was what would the world look like if Prout1 – as theory and movement – were in power; if the core ideas of Prout were adopted as the norm, as informing and framing global and local legislative priorities2?

The Prout Parliament Game has four parts. Part 1 is an explanation of core Prout ideas in a futures context. Part 2 is a futures wheel process that develops the implications of key emerging issues. Part 3 is the development of a checklist that is used to inform decision-making. And part 4 is the process of using the checklist to vote on parliamentary proposals. The structure and processes of the game lend itself to easy adoption for other social movements and organizations.

I began the workshop with the overall global context. First was Sri P.R. Sarkar’s argument that not only was time “galloping” – increasing at a rapid pace – but that as global and local political and economic systems are experiencing flux, individuals can have a greater impact: you and I can make a difference. Second, the critical importance of vision, of defining where we as a society wished to be in 20 years. The argument made was that those who can imagine a desired future, feel the future they wish, had a greater chance of achieving the future. Strategy thus emerges from vision and not as an outcome of current problems.

I then presented some critical aspects of Prout. These were: 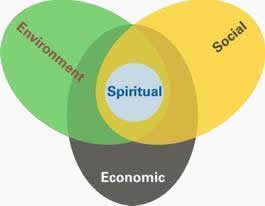 In this context, we developed six working groups and asked a series of what-if questions (derived from the foresight literature)3 for Australia by 2038. Each group explored the implications of each question and articulated Prout strategies.

Each group presented policy positions. I report on two of them.

For the rise of plant based diets, including the likely exponential growth of cellular agriculture, participants (who all happened to be between the ages of 8-14) suggested that Prout work with farmers to help them transition from meat-based systems to plant-based systems. The suffering of animals needed to be addressed. Prout practicing compassion was paramount here.

The technologies of the mind group noted that with 50% of people meditating, there would likely be improved physical and mental health, thus freeing up financial resources to be used in other areas. There would also be an elevation of consciousness – softer, wiser, integrated – of the society, making progressive policy changes in other areas easier. 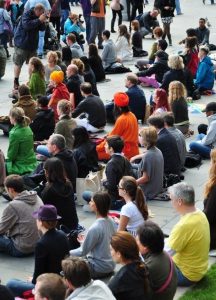 After brief presentations by each group, participants were asked to develop a Prout checklist. A checklist becomes a way of articulating policy based on the core Prout ideas and not on sentiments one may privately hold. It also helps in taking Prout from a theory to practice.

Groups articulated a number of salient points. Some of the key ones were:

With the establishment of a working checklist, we then convened the Prout parliament. As this was experimental, we first had policy positions that were easy to dissect.

In the first, it was suggested that all western medicine be removed by 2038. Using the checklist, this was quickly voted down – as it excluded an important healing tradition, it would lead to more harm, and as one participant reminded, Sarkar was pluralistic toward healing tradition – what mattered most was whether the modality cured or not.
The second policy suggestion was terminating funding for renewable energy sources and the move toward full nuclear.
This was also quickly voted down as the risk of harm was considered too great. Nuclearization would also lead to a concentration of economic power. Local, cooperative energy solutions from solar, wind, and geothermal were recommended instead.

The parliamentary floor was then opened up to all proposals. Three individuals presented.
The first suggested that meditation practice be legislated for all high schools in Australia. There was a debate as to which type of meditation. This was clarified as 20 minutes a day of quiet mindfulness every morning. Further clarification was sought as to primary versus high schools. The presenter argued that for primary schools it would be optional, but for secondary schools, it would be mandatory. Given the health gains and correlated reduction in crime and other positives associated with mindfulness/meditation, the resolution was passed.
The second suggested that regulation of housing be reduced so that one could quickly put up homes as needed so as to reduce homelessness. The votes were positive, however, the gender group was concerned that a lack of regulation could adversely impact safety, nature, and cultural heritage. The presenter modified his proposal, asking for reduced regulation and not the end of regulation.
The last presenter wished to adopt a policy of no government interference in private education. Upon clarification that there would still be federal neohumanist4 guidelines, the proposal was passed. Education policy would be set through educational experts and registered bodies using evidence-based policy.

The game concluded with the parliament funding the three proposals. Each committee was given (an imaginary) one million dollars to fund research and implementation.

The conclusion was that the Prout Parliament Game was a practical and easy way to teach Prout and a great way to envision what a Proutist society could look like. While some expressed positive doubt, the workshop ended with a quote from Sri Sarkar:

1Prout has five dimensions: 1. an alternative cyclical theory of history; 2. an alternative economic system that is cooperative based; 3. a global governance system with spiritual practice as foundational; 4. a new theory of integrated leadership that transforms the historical cycle to a dynamic spiral; and 5. a gaian theory of self based on gender equity and planetary identity.
2Sohail Inayatullah, Prout in Power. Policy solutions that reframe our futures. Delhi, Proutist Bloc of India, 2017.
3For more on this, see: www.metafuture.org. Also, www.shapingtomorrow.com and www.futures platform.com
4For more on neohumanism, see: Sohail Inayatullah, Marcus Bussey and Ivana Milojevic. Eds. Neohumanist Educational Futures. Tamsui,Tamkang University, 2006.
5P.R. Sarkar. The Electronic Edition of the Works of P.R. Sarkar, Version 7.5. The Thoughts of PR Sarkar. You are never alone. Kolkata, Ananda Marga, 2008.