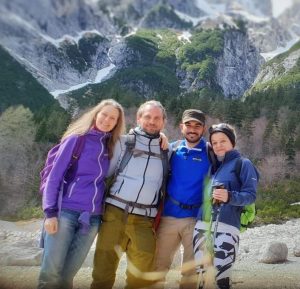 YogaSofia comes from the idea that yoga can no longer be considered only as hatha yoga. The greatest risk, as can be seen today, is distorting yoga and seeing it only as mere physical exercise, which, however beneficial, does not lead to the true change that the whole of philosophy hopes for in human beings and in the human world. Based on Neohumanism and the reality that everyone can finally take care of their own self-realization, we try to explore the importance of rational thought in fighting against dogmas, and the possibility of doing this in a coordinated and cooperative way. YogaSofia is intentionally not called a “method”, but a “project”, precisely because of its epistemology and gnoseology: the philosophy of yoga is not only explained as a theory. Each individual involved in a YogaSofia workshop gets involved in exploring individually and socially, to bring out awareness of an evolutionary and neohumanistic way of life. It is not a method to follow, but a project that co-builds, workshop after workshop. The goal is that nobody comes out the same person as before. After a YogaSofia laboratory, participants will be driven by the will to research and create better realities. This movement is possible at any age because each of us has the capacity to discern, the possibility of choosing what is best for oneself and for others. We explore the thought of philosophers, from Socrates, to Zambrano, to Merlau-Ponty, in order to unite the western world to yoga which sometimes looks so eastern, even if it actually has a common infinite origin. Ours is a project that hopes for a true social co-construction conceived and explored with our body in our reality.

YogaSofia is an educational project which comes from the experience of four people – Christian Franceschini, Alexia Martinelli, Salvatore Ingargiola and Cristina Terribile – in public schools in the north of Italy. It has the slogan “Universal wisdom in practice” for a practical but also ideological philosophy because schools need to know how to apply tantric intuitional science. We work in schools teaching not only young people, but teachers as well.

This project was meant to satisfy the needs of younger generations but it actually addresses all. Every year, hundreds of children are benefited by this kind of program. They are taught how to apply the practical wisdom of Yoga in their daily lives, through a physical, psychological, ethical, and spiritual approach.

For the teachers themselves there is a 3-year course. During the first year they learn about neohumanism, the importance of fighting against obstacles in life, having a higher goal, and practicing yogic lifestyle, yogic hygiene, ethics and much more. In the second year we show them how to teach children, and in the third year we act as tutors while the teachers apply YogaSofia in their classes. At the moment we are working with around 20 teachers.

There are many other courses and workshops that we give for singles, couples, and families on several personal and social issues. In the Belluno area, precisely in Losego, Katjusa Viel has opened a small family school for children, infants through 6 years old. She wanted to use the YogaSofia method with children and parents right away. In August the first training for “Operators of the YogaSofia Project” will start at her center. Several parents are going to participate.
Ours is a work in progress. Any input is always welcome. Our email: