Climate Change and a Neohumanist Response – by Acharya Shambhushivananda Avadhuta

Climate Change and a Neohumanist Response

“Can we reach biosphere consciousness and global empathy in time to avert planetary collapse?” asks Jeremy Rifkin, President of the Foundation of Economic Trends. In his widely publicized view, “The empathic civilization is emerging. A younger generation is fast extending its empathic embrace beyond religious affiliations and national identifications to include the whole of humanity and the vast project of life that envelops the Earth.”

While previous industrial revolutions relied on coal or other fossil fuels, the present digital age is looking towards renewable energies to fuel the new industrial age. Earlier advances relied on the trickledown theory, but the emerging consciousness is clamoring for bottom-up approaches. The old days treated nature as an externality. The new paradigm treats nature as an equal stakeholder whose mute voice must be heard and respected. In a nutshell, the new paradigm is neohumanist in nature where change must take place at all three levels – individual, institutional and ideological, blending economics, society and nature for the collective welfare of all.

What do people do to meet their growing needs for agricultural lands, for industries, etc.? They bring about large-scale deforestation, but no one bothers to think about the creatures that live in those forests. So the tigers and elephants haunt the villages, kill the people, and demolish their houses. Why? Out of their instinct for self-preservation. We have destroyed their natural habitat, the forests, but we never bothered to consider any alternative arrangements for their shelter. We have recklessly destroyed large areas of forests without caring to think that thereby we are destroying the ecological balance among the human, plant and animal worlds. And we never realised – and still do not – that this wanton destruction of the animal and plant worlds, will be of no benefit to human beings. Rather it will be a great loss for human society. Rather it will be great loss human society, because each and every living entity, whether plant or animal, has two types of value: one, its “utility value” and the other, its “existential value.”

Human beings usually preserve those creatures which have an immediate utility value for them: for example, cows. Human beings protect them for their own benefit because cows have some utility. But when people are able to prepare synthetic milk by chemical process, they will also stop breeding cattle. That day people will either kill the cows by starving them or they will themselves eat the cows.

Who says that those creatures who have lost their immediate utility value have no right to exist? No one has the moral right to say this. No one can dare to say that only human beings have the right to live, and not non-humans. All are the children of Mother Earth; all are the offspring of the Supreme Consciousness. Most creatures have existential value, although they may not be valuable to human beings, or we may not be aware that their existence has some significance. Oftentimes we cannot know the utility value, or the existential value, of a creature; we wrongly think that it has no existential value. This is the height of foolishness.

…One more thing must be said – that non-human creatures have the same existential value to themselves as human beings have to themselves. Perhaps human beings can understand the value of their existence, while other living beings cannot: this is the only difference. Even so, no one has delegated any authority to human beings to kill those unfortunate creatures. 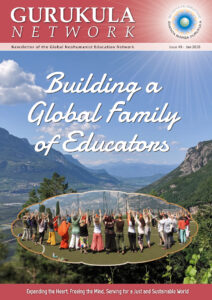 4 – Meditation and Neohumanist Consciousness – by Acharya Shambhushivananda Avadhuta
5 – Why Meditation? – by Amal Jacobson
6 – Challenges for Youth – Part 1: On Climate Change – by Prof. Edward McKenna
8 – Climate Change and a Neohumanist Response – by Acharya Shambhushivananda Avadhuta
9 – Neohumanism: A Philosophy of Education for the Anthropocene – by Dr. Kathleen Kesson

Educating for a Bright Future Conference

32 – About the Substance of Forms – by Henk de Weijer