The author excerpted this article from the introduction of her book Yama Niyama: Yogic Ethics for a Balanced Mind.

To understand an idea, it is always necessary to grasp not only its appearance but also its inner spirit. Upon this a proper conceptualization of the given topic can be gained, and for this one must know the context in which it sits. To realize the purpose and meaning of the guidelines of behaviour which Yama-Niyama are, the same must be applied. In fact, one of the points of the Niyamas, ‘Svádhyáya’, suggests exactly this: that one must read with proper perception, not only what is literally being said, but of what is implied, of the essence of the words. This small book is an attempt to explain the teachings of Yama-Niyama in such a way, prompting a process of self-reflection which can serve towards the deepening of our ethical, emotional and spiritual lives both individually and collectively. 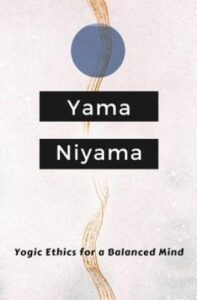 Yama-Niyama are basically a set of ten ‘ethical guidelines’, divided into two equal parts: the ‘Yamas’ and the ‘Niyamas.’ The five points of the Yamas are designed to establish a balanced relationship between the inner and outer worlds, the subjective and objective, and are distinguished from the Niyamas in that they cannot be implemented without an external object to be acted upon. The Niyamas are internal attitudes which can be cultivated without the need of a second entity. Originating in the Indian subcontinent, the Yamas and Niyamas are well known for being included in the yoga sutras of Patainjali, but like many other ideas in that whole book, by no means originated there. Similar and also other somewhat different versions can be found recorded and interpreted in numerous ancient texts, and were surely taught orally, as was the system of basically all Indian spiritual traditions before and also after having been written down. The explanations given in this book are based upon the teachings of Shrii Shrii Anandamurti, the twentieth-century founder of the socio-spiritual organization ‘Ananda Marga.’ His original thoughts can be found in the book titled: ‘A Guide to Human Conduct.’
Shrii Shrii Anandamurti states in the very first lines of his book that morality is not in itself the final goal of life, and that Yama-Niyama are principles designed with an objective beyond themselves, based upon another more deeply underlying recognition of the purpose and value of human life. They are not based upon fear, desire for personal gain in the present or future, or the self-assurance of ‘righteousness.’ They are, in essence, a recognition of the special human capacity of self-reflection and the desire to convert separation into unity, or the impermanence of individuality into the infinite and transcendent. This is the base of the Tantra Yoga propounded by Shrii Shrii Anandamurti: that there is a universal consciousness reflected within each human being, indeed within the whole creation, and it is the process of experiencing in ever deeper levels this consciousness that gives peace and happiness in life. Parallel to this we are transformed into better people through the amplification of our empathy and the sense of social responsibility that arises through the experience (and not only theory) of interconnectedness. Yama-Niyama are the base upon which this development can occur. They are, in a sense, an ethical formulation ‘informed by our ‘sense of spiritual potential”, a practical reply to the recognition that:

The impulse to bridge the separation between the small-self and the Spirit has tremendous consequences throughout all the levels and quadrants of human existence. It is as central to any description of humanity as gravity is to a description of the physical universe. (Towsey, ‘Eternal Dance of Macrocosm.’)

In order to bridge this separation, or even to develop a clear awareness of this impulse living inside of us and how it affects our lives (more often than not unconsciously), a certain calmness of mind is needed. The principles of Yama-Niyama are a codified explanation of observations as to how the mind works and the attitudes and conduct which will provide the individual with the mental balance needed in order to realize the inspiration of the infinite within their self and in daily life. For this reason they are considered as the foundation of any meditation practice, without which attempts at concentration will be akin to lighting a fire with wet wood: a lot of smoke, little warmth, and increasing frustration. This idea will become clearer as you proceed throughout the book.
Alongside the recognition of the human search for the transcendent, Yama-Niyama incorporates equally a dose of relativism, never forgetting that each and every situation in life is unique. One must apply discernment in every case, not less so but perhaps even more so than if one were to live without any particular code of ethics. Yama-Niyama do not provide the specifics of how one must respond to any given situation, rather the onus is on the individual to reflect, take responsibility and then decide the best approach to take. What Yama-Niyama do is create the perspective, sensibility and psychic ‘design’ though which one is able to make decisions fully aware of one’s conscious and subconscious intentions.
This act of taking responsibility for one’s subconscious is part of what makes Yama-Niyama work, as you will see when you read, for example, the section on ‘Satya’, which explains the interactions between the conscious and subconscious mind, and how these interactions properly guided create will-power and courage. This psychic strength is in turn the source of mental and emotional balance.

…. Peace of mind, within this scheme of things, is not an anaesthetized state of calm in which one avoids the processing of difficult and transformative life-experiences, nor an escape from the responsibilities of daily life. Rather, one is even encouraged to make special effort to place oneself in challenging situations in order to confront one’s fears, contradictions and mental complexes. In this context, what is the meaning of ‘mental equilibrium’? It is the state in which one has the strength and composure of mind to maintain a balanced and unbiased perception even when surrounded by disturbing forces. This capacity derives from one’s integrity of intent, which in turn derives from the awareness of one’s unconscious thought patterns, and of consciously working to integrate into these patterns a sense of univeralism: of interconnectedness and thus of empathy with the entire created world.
The effort of self-reflection and actualization of its results which Yama-Niyama demands produces a kind of mental friction, which, as a flour mill grinds wheat into flour, refines the perceptions and emotional state of a person. Each time this effort is made, the mind gains in strength and thus equilibrium, and what begins as a conscious effort is gradually integrated into the subconscious mind to become a natural state of being:

It cannot be said that the ultimate aim of human life it not to commit theft; what is desirable is that the tendency to commit theft should be eliminated. Not to indulge in falsehood is not the aim of life; what is important is that the tendency of telling lies should be dispelled from one’s mind. The sádhaka (spiritual practitioner) starts spiritual practices with the principles of morality, of not indulging in theft or falsehood. The aim of such morality is such a state of oneness with Brahma (infinite consciousness) where no desire is left for theft; and all tendencies of falsehood disappear. (Shrii Shrii Anandamurti, ‘A Guide to Human Conduct’)

In this sense, Yama-Niyama also serve as a link between the relative and absolute, and a tangential point upon which ‘fact’ (information derived from the objective world) and ‘meaning’ have the chance to cordially meet:

A comprehensive account of ethics requires accepting that they are both constructed by humanity and prior to humanity… they have both relative and absolute origins. On the relative side, ethics are socially constructed to help us survive in a contrary universe – they assist the viability of autonomous systems. On the absolute side, ethics are informed by our ‘sense’ of spiritual potential which first manifests… in the Archetypal mind. It is the level of mind where archetypes such as virtue, beauty, truth, justice and love first differentiate from Spirit and thereby give multiple kinds of meaning to our lives. (Towsey, ‘Eternal Dance of Macrocosm’)

Human beings have a tendency to search for absolutes: in beliefs crowned as ‘ultimate’ truths; in perfect systems; or, equally so, in materialistic reductionism. The problem with this arises not because the desire of the possibility of transcendence is faulty, but because we look in the wrong places and try to convert relativity into this absolute (be it as absolute peace, certainty, etc) that we so desire. This is paradoxical, as by doing so our mental processes and world view are crystallized into dogmas, and human creativity is stifled as our unconscious or misunderstood ‘thirst for the infinite’ is converted into its opposite.
Literature offers no shortage of dystopian novels which vividly demonstrate this point: that human happiness is not to be found in an externally imposed stability and certainty; nor in having our moral and emotional dilemmas solved effortlessly by artificial means; nor even by the simplification of life through the continuous provision of indulgent pleasures.
Inspiration in life comes from the dynamism produced from the friction of opposing forces and the growth and conversion of the unknown into the known that this produces. That we can learn to appreciate this point and enjoy the process involved in it is made possible through a feeling of love for something greater than one’s self being realized within one’s self through the process of growth.
The biologist Humberto Maturana, describing how interactions of love effect the evolution of humanity, defines love as ‘the domain of those relational behaviours through which the other arises as a legitimate other in coexistence with oneself’ and explains that it is love, by creating a space of cooperation, trust and undistorted relationships, that opens the possibility of the liberation of intelligence:

Love may have many contextual expressions, but its essence is the same, and spiritual love is the ‘spontaneous experience of expansion of love’ in which ‘there is an opening to the total acceptance of the cosmos in unity with oneself.’

What does Yama-Niyama do for us, finally? It creates the balanced state of mind, possible because of the strength gained from clarity of intent, which permits us to have empathy beyond ourselves, towards those known or unknown to us, loving them as expressions of that which is universal within all of us. Thus every aspect of creation is legitimate and does not need to justify its existential value, but does need be treated according to our best judgment in the given context. Yama-Niyama is the base upon which we become able to expand our love from individual to infinite, through meditation as a spiritual practice and in all endeavours of daily life.

This book is available in almost all online book-stores worldwide, and currently work has started on a Spanish translation. Anyone who would like to translate it into their local language is welcome to contact the author. ().