Inner Peace of the Individual in Society 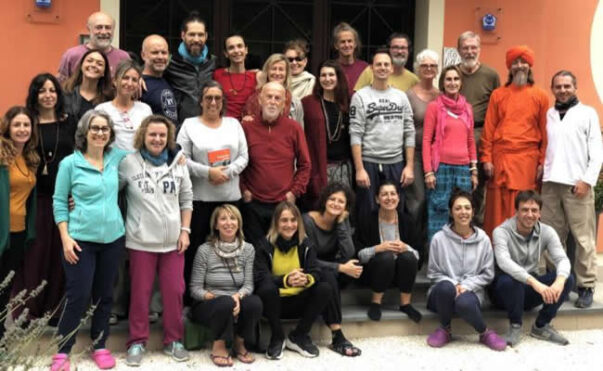 In October, Yogis Academy conducted classes in 2 macro-regional seminars, in Parma and Pescara, Italy. Christian Franceschini, Dada Ranjitananda and Dr. Sid Jordan, gave workshops on the Inner Peace of the Individual in Society.

On the first day Dada Ranjitananda began with a review of the practical and holistic practices of yoga that contribute to individual peace of mind and social benevolence. Christian reviewed how ego centered, matter centered, dogma centered and God centered philosophies play a role in the disruption of peace for the individual and society. He then explored the practice of meditation including the science of sound involving mantra and cakras.

On the second day Sid Jordan presented the topic of Awakened Conscience as a neohumanist strategy for attaining peace and benevolence for the individual and society. The participants were introduced to the steps of applying rationalistic mentality that involved study (practice), evaluating pros and cons (collective mind) and deciding what served the general welfare (social equality) as applied to the immigration policies of Italy. In Pescara more time was devoted to participants working in small groups to determine what actions they could personally undertake to improve the lives of immigrants. Two groups focused on how they could advocate for the government to exert more control over the immigrant selection process, insure proper care of immigrants and support the expansion of a volunteer service. The other two groups chose to become more directly involved by inviting immigrants into their homes and volunteering to assist with teaching the Italian language and employable skills.

Sid Jordan also taught a somatic yoga course in Pochi, where the 2019 summer Global AMGK Conference was held, for the class of Cristina Terribile. This class taught the Hanna Somatic Education approach that diagnosed chronic muscle contractions and offered somatic exercises and Astaunga Yoga postures that isolate these contractions. During the somatic and yoga exercises the participants were instructed to become aware of the sensory feedback associated with consciously releasing the contractions that have been sustained by unconscious spinal reflex. They were encouraged to repeat the exercises daily to consciously observe the release of contractions to overcome the return of the unconscious reflex that maintains the contractions. The yoga exercises that complemented the somatic exercises involved larger sets of muscles that generalized to the release of related sets of muscles. All of the participants reported some degree of success.