For an introduction to the topic of Microvita please refer to the article “About the Substance of Forms” from the last issue (issue 49) of Gurukula Network: https://gurukul.edu/newsletter/issue-49/49-about-the-substance-of-forms/

Molecules and their Smartness

Currently, almost everyone on our planet is confronted with the Corona Virus Disease, COVID-19. Small as they are, with their size of approximately 0.1 micrometre, they flatten entire countries. In RNA, nucleotides are compositions of molecules. These single-stranded, very long molecules, are enclosed by a layer of proteins. The poliovirus, with its genome of 8.000 nucleotides, is one of the smallest viral genomes. COVID-19 has almost 30.000 nucleotides and is one of the longest genomes. However, this number does not make it more dangerous. It only means that it has more skill to overcome host resistance.

A virus cannot be called a living organism because it can only reproduce at the expense of a host. That certainly does not mean that a virus is stupid. Once it has invaded a host, it can multiply for days without waking up the immune system. Viruses observe, select and remove modified pieces of RNA. Also, they mutate constantly, allowing them to respond quickly to a potential host’s defence mechanism. Viruses are smart.

Another example of smartness: Kite flying is an interactive game with the forces of nature. Without enough wind or in the opposite situation, during a storm, the game remains a dream. What makes kite flying possible if there is enough wind? Not its components, paper, wooden bars, rope or tail. These are undoubtedly important, but controlled flying also depends on the intelligence and know-how of the maker and the skill of the player.

Viruses are heterogeneous compositions of atoms and molecules. What makes them so smart, dangerous and parasitic? Could it be that, just like with kite flying, also a smart component is included? Are viruses “complicated molecular machines” or biological beings with a rudimentary mind? If unicellular organisms, and with them viruses, don’t have a brain, what explains their ability to observe, read, translate, and then respond appropriately?

In the previous paragraph questions were asked about a possible carrier of intelligence in uni- and multicellular organisms. Humans are made up of unicellular organisms and equipped with a body and a mind. Their Last Universal Common Ancestor LUCA at the beginning of evolution, must have been a unicellular organism or even groups of organelles. Did the ultimate human mind come out of the blue, or did it evolve from the smallest imaginable mind in LUCA to the current human mind in the current human body? If it is possible or even probable, that mind is something that can evolve, what is the substance of that ‘something’? A similar question also applies to viruses. What is the breeding ground, the substance for their cleverness? Shrii P.R. Sarkar (May 21, 1921 – October 21, 1990) approached the quest for clarity in a whole new way. He indicated that the universe is a composition of two components, of which consciousness is the material factor and Cosmic energy the operative principle. Consciousness is all-pervading, while energy is not. Energy is required to perform any action. Energy, the blind force, cannot do anything in a systematic order, unless and until it is supported by intellect.

Now, look at some ideas that he mentioned about ‘microvita.’ 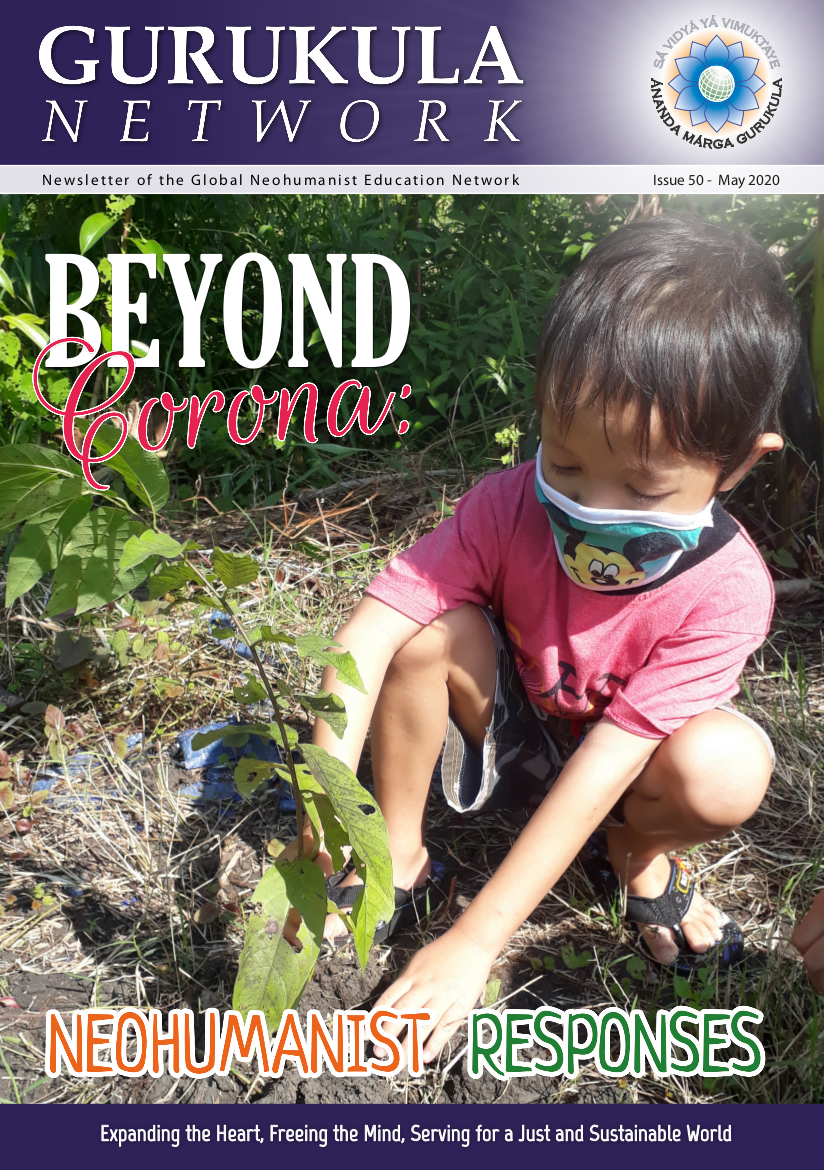 3 – Celebrating our 50th Issue of Gurukula Network
4 – AMGK Response to the Coronavirus Pandemic: An Opportunity for Reflection and Change
5 – Beyond the Corona Pandemic: Renaissance or Oblivion? – By Ácárya Shambhúshivánanda Avadhúta
6 – The Power of Story and the Crisis of Meaning – By Amal Jacobson
7 – Neohumanism and PROUT: The Way Through the Current Crisis – by Dr. Kathleen Kesson
9 – The Economics and Politics of Crisis – By Prof. Edward McKenna<

11 – We Are All Unschoolers Now – By Dr. Kathleen Kesson
13 – Innovation in the Time of Corona By Didi Ananda Devapriya
15 – Progressive School Coronavirus Report – By Eric Jacobson
17 – Responding to the Covid-19 Pandemic to Build a Better World – By K. L. Chew
19 – Sælukot Preschool Reykjavik Iceland – By Didi Ananda Kaostubha and the Sælukot Community
20 – Online Teaching Tips – By Ruai Gregory, M.A.
21 – Towards a People’s History for a New Earth – By Lesley Whiting

33 – Viruses and Microvita – By Henk de Weijer
34 – Microvita and the Coronavirus Pandemic By Dr. Hans-Joachim Rudolph
36 – Experiences of Naturopathy Training in the AM Wellness Center, Philippines – By Mirjam Koskela
37 – Stress Management, Prabhata Samgiita and Music Therapy – By Prof. Mrinal Kumar Pathak
41 – Balancing Care for Self and Others in Stressful Times – By Dr. Sid Jordan

49 – Towards a Brighter Future: Fragrant Petals from the Life of Beloved Baba -By Shambhushivananda
49 – The New Renaissance – By Shrii Prabhat Ranjan Sarkar