A powerful tool for refugee/migrant mothers in Greece 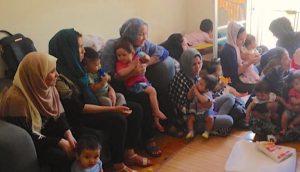 “Through the educational support groups, I’ve discovered that I can learn a lot,” shares Milenka, a 25 year old from Cameroon. “I used to feel ashamed at being uneducated but now I am not only learning but also helping other mothers with what I’ve learned.”

Awakening the thirst for knowledge, helping mothers learn and think critically, reinforcing core human values, empowering mothers to understand when they are being exploited or abused and assisting them to make informed choices in their lives and the lives of their children are but some of the underlying themes of AMURTEL1 Greece’s educational support group program for refugee and migrant mothers. Hailing from Syria, Afghanistan, Iran, Iraq and more than 10 different African countries, the mothers are exposed to ideas aimed at strengthening their lives as mothers while helping them realize their capacities, gain self-confidence, and expand their perspectives beyond the often restrictive social norms in their native countries. 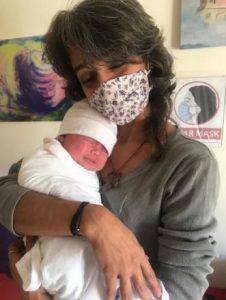 Attending sessions in either Arabic, Farsi, French or English, the mothers rotate through four groups:

The innate mother-infant bond, which sets the stage for inculcating trust, gratitude, intuitive communication, and a sense of wonder in both infant and mother, is at the heart of the NHE support group curriculum. Studies show that refugee and migrant women, particularly when they are pregnant or have infants, are highly prone to the lingering effects of the trauma which caused them to migrate as well as the traumas experienced on the way to the host country.

Masouma, an Afghan mother of two, came to us with her two month old son, Yusef, asking for diapers. When we undressed the baby to weigh him, we found a severely malnourished infant not much more than skin and bones, almost too weak to even suck and barely able to keep his eyes open. Masouma had not understood the Greek and English used at the hospital after giving birth and thought that the doctor told her to feed the baby three times a day rather than at least every three hours. Thinking that he was a “good” baby who didn’t cry much, slept a lot and didn’t seem to be very hungry, Masouma was too traumatized to recognize the dangerously critical condition Yusef was in. But she was not a negligent mother. In the next six weeks of hospitalization during which time our volunteers were with her, sometimes day and night, we understood that she loved her children but was totally lost in her new environment. After discharge from the hospital, her attendance at the educational support groups was a lifesaver. Illiterate, not even able to tell time, having no friends or family in Athens, she began connecting with other mothers, became gradually more responsive to her infant and older son, and used our center as a safe all-woman’s space to get to know herself once again.

Empowering mothers to not only help themselves and their families but to support and empower other mothers is just as much a priority as self-learning. An amazing 93% of mothers told us in a survey that they use the knowledge gained in the educational support groups to help other mothers in their communities. That means that the work is having a greater impact than we even know as mothers become valuable community resources.

Glory is one of these dynamic, pro-active mothers. Originally from Nigeria, she took our breastfeeding peer-to-peer training course and has made a YouTube video aimed at women from African countries. It was heartwarming to see her enthusiastically encouraging mothers to breastfeed with accurate and well-presented information. She became so inspired by taking our course that she decided to continue her education and was accepted to study at a university in the UK. 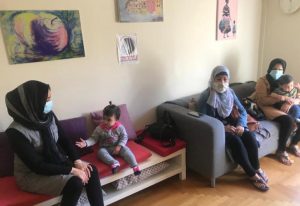 Sexual reproductive health and gender based violence are two areas that affect almost all the women coming to AMURTEL and in which we see a lot of change. For most Middle Eastern women, it is huge to overcome the intense taboos and shame of even saying aloud words relating to female body parts, let alone discussing any of it. It is not uncommon for them to have no idea where their menstrual blood comes from or how fertilization occurs, as two examples among many. This is particularly true for Afghan women, where illiteracy and lack of education are high. Most often very shy and embarrassed in the beginning, they soon enjoy learning female anatomy and physiology and the menstrual cycle, moving through related topics to finally ending with contraception and family spacing. Following this are discussions on women’s rights, social gender norms, what constitutes violence and where they can get help if needed.

Nasrin, an Afghan woman from a small village, admitted that the idea of a woman having such rights had never occurred to her. She and her friends have begun talking about this amongst themselves and have begun standing up to their husbands. Engaged at 15 and married at 17 to her cousin whom she did not love but was forced to marry, Nasrin says the beatings that she received every day of her life from her husband have begun to decrease. She feels hopeful that with time and further acclimation into European society, they will decrease even more.

Their stories are many. A great number of African women report feeling safe in Greece, that the violence they endured in their native countries was everywhere: in the home, the streets and the workplace. Many of our African women are single mothers whose children are the results of sexual violence or survival sex.

Afryea, a Ghanian mother of one, was sold as a child into a rich man’s house, used as a servant and sex slave and had her first child taken away at birth, most probably to be sold or enslaved. She does not know what happened to him. Managing to escape with the help of a man who became her husband, they spent years en route and finally arrived in Athens, where they’ve settled and had a child. Afryea emphatically states that the hardships she’s been through to get to Greece have all been worth it because what she lived through will never happen here to her daughter.

The stories of the Middle Eastern women are different and tend to center around the theme of having been homebound with their lives controlled by male family members. In Afghanistan, for example, a woman’s name is never uttered in public and not written on documents including the wedding invitation when she marries, medical prescriptions or hospital records when ill, not even on her death certificate or tombstone. She is always referred to as the wife, daughter, sister or mother of male relatives and that includes when speaking directly to her. In parts of the country, especially villages, women never leave the house without a male guardian. Thus, many women’s first step is to become independent little by little. Some proudly declare that they move around Athens on their own or with their children without having to have husbands or guardians with them while others say they are still not allowed to do that. A few tell that they no longer ask their husband’s permission every time they go out. Many want to study, an option not previously open to them. They say they have become stronger and speak their minds more readily. Shirin, a Syrian mother of 3, thinks she is one of the lucky ones because, “I voice my opinions with my husband in ways I did not do in Syria and my husband listens in ways he didn’t in Syria.”

Maryam, a 24 year old with one child, divulged in a group conversation that she wanted two or three children but her husband wanted seven. She and the other women all laughed and nodded their heads while one woman came out with the suggestion to let him take a second wife. That way, Maryam and her children would still be supported but she would not be forced to have more. Some of the women immediately agreed that this was the sensible solution while others, who were first wives and did not like having second or third wives in the family, disagreed. Maryam retorted as a strong, idealistic and hopeful 24 year old that she did not want her husband to marry more wives. She said now that she was in Europe and she knew her rights, she would ask him not to, crying, begging, screaming if necessary. Maryam went on to admit that in Afghanistan, in this situation she would never have said a word, despite how painful it would be. Of course, she and the others all agreed that if he decided to do it, she could not stop him. It was his choice ultimately, not hers. In the end, the fact that polygamy is outlawed in Europe gives Maryam a feeling of safety but not surety.

One thing that almost all our women have in common, regardless of where they come from, is pride in motherhood. Being a mother is a primary personal and social role which defines them, both individually and in society. Most of our women agree that they were raised mainly to be mothers and this brings them much joy and a sense of fulfillment. The shared commonality of motherhood at AMURTEL allows them to gradually open up and be willing to discuss, or at least think about, a variety of topics, even sensitive ones such as sexuality, gender based social roles, abuse, and human rights.

Our aim at AMURTEL Greece is that the principles of Neohumanist education will help free women from dogma, allowing them to become stronger through knowledge and being part of a community of mothers, thus giving their infants the best possible start in life. While most of our mothers are devout Muslims or Christians, we hope that the essence of Neohumanism will break down barriers of separateness and profoundly aid them in their determination to develop themselves so that their children will have every opportunity for a full and meaningful life.