The Call for a Global New Renaissance: 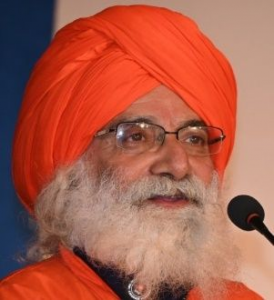 Very rarely, a person is born on this earth who changes the civilizational discourse and provides an all-round pathway to a brighter future for all. Shrii Prabhat Ranjan Sarkar (1922-1990), also known as Shrii Shrii Anandamurtiji was one such enlightened omniscient being, who embodied rare qualities and spearheaded a movement for a global renaissance in all walks of life. He created RU (Renaissance Universal), RAWA (Renaissance Artists and Writers Association), and scores of other movements for personal and social transformation.

First, he redefined religion in terms of mysticism and universal spirituality, and separated facts from fiction and mythology. He explained the core elements of spiritual pursuit in the language of biopsychology. He removed religious superstitions, dogma and blind faith, and replaced them with genuine devotion towards the Supreme Singular Synthetic Subjective Proposition— Supreme Consciousness. His rational and scientific exposition through his magnum opus “Ananda Sutram” (aphorisms on the spiritual and social philosophy), encyclopedic work “Shabda-Cayanika” (an encyclopedia of old rk vedic root words and elaboration of meanings and knowledge related to those words), “Namah Shiváya Shántaya” (on the life and teachings of Shiva), and “Discourses on Mahabharata” are a rare testimony to his inherent genius and give a sample of his lasting intellectual and spiritual contributions to humanity.

Second, he provided modalities for spiritual realization and made improvements in the techniques for the attainment of unison of unit-consciousness with cosmic consciousness. He unraveled the hidden knowledge of vidyá tantra-sádhanás (meditation science for self-realization). He also spelled out codes of conduct for a spiritual lifestyle and set a personal example to inspire others to follow them. His explanations of Yama-Niyama (ethical foundational principles), Paincadasha Shiila (fifteen rules of ideal behaviour), and “Sixteen-Points” (codes of yogic life style), as well as elaborations of scores of other conduct rules continue to provide a pathway for spiritual aspirants. In addition, he devoted a bulk of his time on this earth to instilling moral and spiritual values in his chosen disciples and thereby left markers for the coming generations.

Third, he provided guidelines for a sentient (spiritual) lifestyle, where health could be improved through sentient diet, regular exercises, service spirit, and benevolent use of intellect. The social treatise “Ananda Marga Carya Carya” gives a glimpse of his instructions in this regard. He also invented kaoshiki, an exercise especially for women and young boys for improving their stamina and curing physical disorders. He also popularized Tánd́ava, originally taught by Sadáshiva, as an exercise exclusively for males. This dance exercise removes staticity and infuses vigor and stamina.

Fourth, he showed the intimate interconnection among ecology, health, agriculture, and the economy, and couched his ideas in a comprehensive socio-economic theory called PROUT — Progressive Utilization Theory. PROUT offers a vision of the world free from economic disparities, and promotes maximum utilization and a rational distribution of all potentialities of this cosmos. PROUT’s law of the Social Cycle unravels the source of exploitation in society and provides a concept of sadvipra leadership (benevolent and competent leadership) that could end the cycle of suppression, oppression, repression and all sorts of exploitation in human society. PROUT also addresses the political lacunae and offers a universal vision of a world government to coordinate solutions to the interdependent problems of the planet Earth. He also spearheaded a movement of “Master Units” (eco-communities) as models of self-reliance and progressive thinking in all countries of the world. His program of “Samaj-Movements” (social movements for regional self-reliance) further supported the movement for economic democracy and social justice everywhere in the world.

Fifth, he provided seminal ideas on remodeling educational systems on the principles of neohumanism — a new philosophy of life based on universal love and social awareness. Neohumanism exposes the hypocrisy of pseudo-activities of vocal revolutionaries. It is designed to foster the creation of leaders called “sadvipras” (benevolent and competent leaders) in society through an education system based on the maxim of ‘liberation of human intellect’. In this philosophy, the existential and utility value of all forms of life has been explicitly recognized.

Sixth, Shrii Prabhat Ranjan Sarkar proposed a new paradigm of science called “Microvita” which shows the intrinsic nature of matter, mind and spirit and reveals the invisible relationship among diverse expressions in this creation. The cosmology based on microvita theory could provide the explanation for unanswered questions related to the origins of viruses, life, diseases and creative potentialities. He also promoted an integrated approach to therapeutic modalities. His discourses on healing properties of plants is a treasure for every household.

Seventh, he set an example by composing over five thousand songs called Prabháta Samgiita and showed how music can be utilized for service and blessedness replacing pseudo-culture filled with materialist values. He revived many lost ragas and created many new melodies.

Eighth, Shrii Sarkar called for pramá (balance and equipoise) in all spheres of life and gave a vision of a world rooted in prama-samvriddhi, prama riddhi and prama siddhi (principles of harmony in all the strata of existence: physical, mental and spiritual respectively) thus paving the way for a rule of dharma (righteousness) on the planet. He corrected the notion of human progress and showed that progress that perpetuated inequities and imbalances in individual and collective life was against dharma and a sure recipe for disharmony and an obstacle for world peace.

Ninth, he unraveled the scant knowledge of interconnections among different languages and showed that humanity is one and indivisible and linguistic expressions are merely the result of variations caused by the passage of time, environment and unique psycho-acoustic principles. His vast contributions as displayed in Varna-Vijinana (Science of Letters), Varna Vicitra (Uniqueness of Bengali Letters) and Laghu Nirukta (mini-encyclopedia) are just some of the demonstrations of his firm belief in the philological unity of the human race.

And finally, he opened the lost pages of human history and also revealed unknown history of places and people. He also spoke about the legendary lives of Shivá and Krishna- two god-like personalities of Bharatavarśa (India), revealed their path-breaking contributions, and showed the significance of Preceptor and Sha’stra (scriptures) for the development of human society. Other points of significant importance are one cosmic ideology, rational spiritual cult, common social outlook, and a proper social and economic theory. He propagated the protection of flora and fauna through his grassroots initiatives while showing the ways for “asti” (existence), “bhati” (development) and goal of “anandam” (blissfulness) for all created beings on the planet earth.

His thoughts were ahead of his time and so it is apt to revisit them and explore ways to reform the society in light of his seminal ideas.