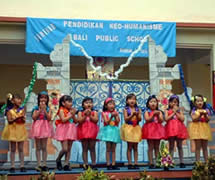 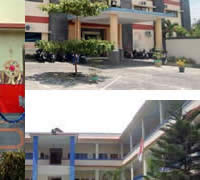 Bali is an enchanted tiny green island where you feel like you are moving through a fairytale. At every corner you meet signs of spirits in the midst of lush green flowering trees and bushes that overflow half hidden one or two storey houses. In Denpasar City, the Bali Public School is situated in a good neighborhood within walking distance from the decorative free standing National Museum and its large parks and sports fields and the beautifully laid out Art Centre.Bali Public School originated from the Pom Pom Kindergarten that was founded ten years ago by Sudiipa and Ananda. Pom Pom was popular and had a good reputation. Pom Pom School’s name was changed to Bali Public School and has a new impressive building in the present new location. It is a square 3-storey building with a big inner courtyard lined with plants. The court serves as sports ground, play ground, and has a stage for school events. There is a parking lot and small canteen for staff between the entrance gate and the building. BPS opened its doors for the first children three years ago. At present the school is running with 172 children from Kindergarten to grade 3 and has rooms to expand to grade 9.The NHE seminar consisted of basic introduction to Neohumanist Education, its philosophy, principles and practices. The Kindergarten teachers got new inspiration and new direction to re-introduce Circle Time and play-way methods after the initial period of emphasis on reading, writing and math. 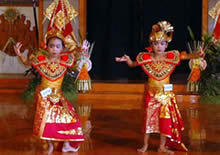 We discussed story telling and ways to demonstrate them, discipline, communication with children, classroom setup and Multiple Intelligences. The teachers welcomed the short video clip on “Messages from Water” that demonstrates how thoughts and words can deeply effect the shape formation of water crystals. Good vibrations expand and cause beautiful crystals while negative thoughts do not produce any crystals at all and rather shows disintegrated images. 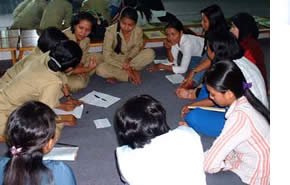 On the last day of the Seminar Ibu Kirana invited teachers from 90 kindergartens and grade 1 to an Introductory NHE seminar. Along with local education officials over 130 people attended. There was a demonstration of teaching yoga to children and rhymes on the stage as well as the drama of “Fairy Flowers” which the teachers and children produced in two days during the seminar. The teachers were invited to regular yoga classes that are offered in the evenings at the school.