Awakening the Joy of Reading Among Village Children in Barlovento, Venezuela

Home / Newsletter / Issue 30 – May 2010 / Awakening the Joy of Reading Among Village Children in Barlovento, Venezuela

Article reprinted by permission of authors 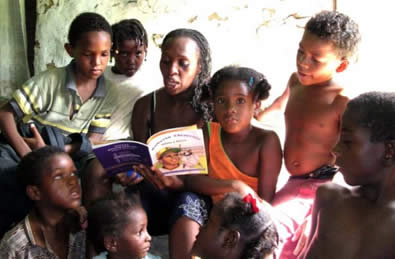 Doris Ramos reading to her children at home in Barlovento

Since 2000, the non-profit community center Centro Madre has been serving five impoverished rural villages near San Jose, Barlovento with education, health, agriculture and economic development projects. In addition, every year Centro Madre has celebrated Christmas and Children’s Day by organizing dramas, theater, music, games, dance, and handicraft activities in the villages. These programs are designed to help people realize that, in spite of adverse and sometimes traumatic circumstances in their lives caused by poverty, violence and discrimination, they have the power to transform themselves and learn to use their full potential.

The founder and director of the center is Didi Ananda Sadhana from Netherlands. She explains, “It often pains me to see very happy young children in the villages, but unhappy teenagers. I noticed that though the kids seem quite bright, and all of them go to elementary school, their educational level is low. Most either do not go to high school, or drop out after only a few months. In La Guarita and El Tesoro villages, only one teenager has graduated from high school.”

She discovered that in most of the village homes there were almost no books, magazines or newspapers. For many children, reading was more of a punishment than a joy. This was partly due to a lack of awareness in the community of how to inspire a young child to learn.

During Centro Madre’s ongoing assessment on how best to partner with the communities, they started to lend children’s books to some interested families in 2005. A year later, this book-lending service was still continuing, because the villagers themselves showed a willingness to invest their own time and energy in it. So in 2007 Centro Madre applied for and received a grant from The Instituto Autónomo Centro Nacional del Libro (CENAL) to buy books and other educational materials for the lending program. Centro Madre then chose one mother in each of two villages to coordinate the book lending. They each received 40 children’s books, which they in turn loaned to about 20 families with small children in each village. Once a week these coordinators visit each house and change the books. They also listen to the children and the parents’ feedback and applaud the successes of the participants.

Keliandri, aged 10, was barely reading before her mother, Alicia Ramos, took on the responsibility of distributing books in La Guairita. The girl was not interested in being read stories, but she started taking books into her room and closing the door. She was so fascinated by the stories that she taught herself to read. Weeks later her teacher announced that Keliandri was reading much better. Now she is trying to interest her younger brother in the stories.

Doris Ramos has three children and is an enthusiastic participant in the reading project. She says, “It’s my younger daughter that helped my son improve his reading skills through the books. To prevent arguments over who gets to read a book first, I need to borrow several each week.”

The book lending service is making a huge difference in these villages because children are learning an extremely vital skill in a joyful, creative and fun way. Many of the stories are humorous and make the children laugh a lot. Bonding and positive attention activities also take place between parents and their children. In one house, the father, mother and the older children all read to one another. 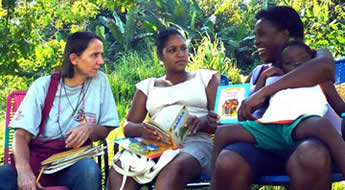 Nóris Diaz, the project coordinator in Madre Vieja village, said, “Some of the older kids now are requesting books as well, so we need to expand our library.”

In 2009 each of the facilitators carried out a survey, asking several questions of each family that was participating:

Who in the house read the books out loud to the young kids? Mostly mothers, some fathers, and a few siblings read, while a few kids read alone.

How often do you read the books? In some homes they read every day, some only once a week, but the majority about three times a week.

What are the kids’ favorite books? Different kids liked different ones, so Centro Madre continues to offer a variety of titles and subjects to each village.

Have you noticed any change in your children’s reading skills or behavior? Every participant unanimously agreed that reading stories to their children was helping their education. Some parents gave very clear examples of their children who were 8, 9 or 10 who barely knew how to read, and who now are reading well.

Were you read to when you were a child? No adult was read to as a child, and only one was told stories by her grandmother.

Unfortunately, due to the lack of a good reading culture, books are sometimes mistreated, torn, scribbled over or get wet, and so need to be replaced frequently. Some people respond to this problem by advising the coordinators to no longer lend books to those families who mistreat them. But Centro Madre’s policy remains to be patient and teach the people and the children to be responsible and take care of the books. The loss of some books is considered part of the investment to guarantee the children the opportunity to learn to read in a fun and creative way.

Nóris told that in one family, the mother was very uncooperative and allowed her very young child to tear up the books. So Nóris convinced the older daughter who is in high school to take responsibility for reading and taking care of the books so the younger children in the house will not be excluded.

In 2009, Centro Madre expanded the project to the public school in Los Galpones, where teacher Maria Pacheco has a fifth grade class of 20 kids. Financial support for this was given by the Emanuela Anatole Foundation and the WWD-F Foundation. Volunteers visit the classroom once or twice a week to read stories, lead discussions and do related activities. For instance, they read an indigenous story about a queen called Araguaney who sacrificed her life for her people to end a prolonged drought. She became a tree called Araguaney which is the national tree of Venezuela. Then the students planted an Araguaney tree in the school compound and promised to take care of it.

The beauty of the Centro Madre reading project is that for a relatively small investment, coordinators can be chosen in other villages and the stock of books can be increased. Alicia and Nóris are now preparing a simple training course and guidebook so that anyone can develop the basic skills necessary to start and run the project in other communities.