The Zonnelicht School in Den Bosch, Netherlands, under the direction of Yolanda Koning, conducted a Teacher’s Training Programme from February 18 – 20, 2010.

It was well attended by 65 educators from various schools around Europe, as well as NHE educators from abroad. Directors and teachers attending included the Zonnelicht School in Hoorn Netherlands; Sunshine Playgroup in Zurich Switzerland; The Sunrise International Preschool in Copenhagen, Denmark; and The Sunrise Primary School in London, United Kingdom. Other NHE educators travelled from the Amsterdam, USA, Sweden and Egypt. 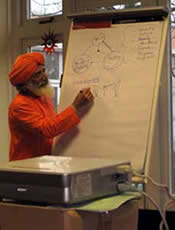 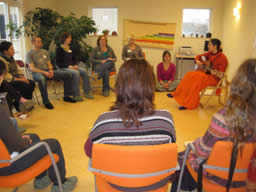 The opening talk was given by Dada Shambhushivananada entitled “Being a Part of a Bigger Whole” in which the layers of the mind were introduced. This was followed by a discussion group led by Didi Ananda Devapriya on the “Layers of the Mind” and application of this knowledge for children’s development.

Didi Anandarama conducted a class on “Yogic Dance” and another one on “Meditation for Your Personal Growth, including Spiritual Practices.” 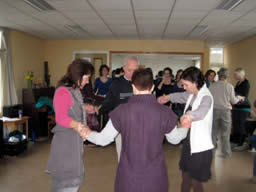 Classes on the “Spiritual Development of Children” were conducted by Didi Ananda Devapriaya (ages 0-4) and Jolanda Koning (ages 4-12).

Dada Pranakrsnananda gave a class on “Authenticity”. This was followed by a drama workshop by Ole Brekke on the theme of “Expressing One’s Authenticity”.

There was a “Mindfulllness” workshop by Sujith Ravindram in which one’s inner nature was compared to the nature of a child and a simple mindfulness technique was taught. 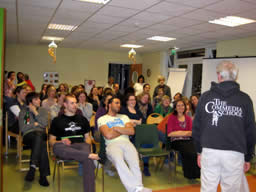 The evening programme featured a music and dance workshop by Tatjana and Jacqueline and Movement and Songs by John Dakpo. An audience participatory dramatic performance, “Spontaneous Surprise”, was led by Ole Brekke.

NHE Educators met after the Conference to further Neohumanism around the world.