Volunteering at an After School Club, Egypt 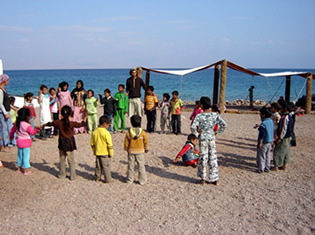 Volunteering at an After School Club

Misena is the oldest Bedouin village on Sinai, Egypt. It is located near Nueiwba Red Sea port city and has about 5000 people. Children who play freely along the coast line have been welcomed for many years at the Ghannah Lodge run now by two Belgian women in partnership with local Bedouins. The lodge has been hiring a local Bedouin girl to help the kids in their homework and some extra teaching in the afternoons.

From the beginning of this year Lesley and Didi Anandarama are supporting this after school programme with NHE teacher training and bringing in International volunteers. 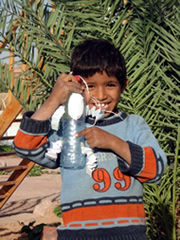 Keith from England was the first NHE volunteer and has been there for four months. He has been very successful in attracting more and more children so that now there are 150 in the registry book of which about 50 come every day. The children have blossomed and are so eager to learn and draw, mould clay, play card games or play with puzzles.

Keith writes: “After a few initial challenges, things began to move ahead! We are teaching cleanliness and hygiene, as well as some very basic English. There is a large variety of abilities here; sometimes younger children will be much more advanced than children two or three years older. Most of the children that come to the class are girls but groups of boys do come sometimes but generally their standard of education is lower. When we first started, children would only come in groups. Now they have started to come alone. We have done many fun things like making binoculars or making figures out of plastic bottles and playing games. The children really love making things! 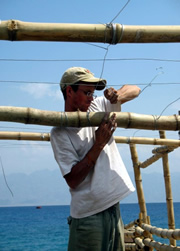 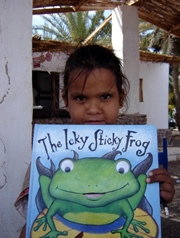 With the help of two more volunteers we started building the new school of bamboo structure and garden cane for the roof. Now we have a permanent place for the children to come to. One of the great things the two Dutch volunteers Nick and Sanna did was bringing a football with them…! We enlisted the help of the children to clear a space on the wasteland next door and now football is an almost daily activity. It has brought many boys, who previously have never been before to the school. Many have produced some good work.

One day a touring party of Austrians visited the lodge. They had spent their last few days searching for a project in which to donate some money they had raised. They saw what we were doing and liked it and in the end donated about 2000 Euros to the project.”

Another volunteer Monique from Holland brought many wonderful story books that the children are enjoying very much.

Future plans are many and there are many possibilities to expand and improve the programme. Tourists are welcome to support the project by staying at the Ghannah lodge and volunteers are welcome to work at the project. Please contact didianandarama@gmail.com for more information.