A New Playground at Sunshine School Laos A Creative Project 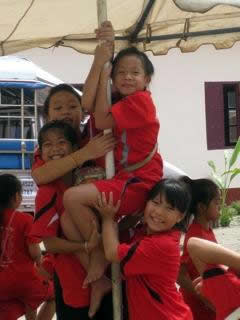 Sometimes, the time, the place and the people seem just right for something to happen… a ripening of ideas, environmental needs and willing personalities bring together a creative spark.

A week ago, in the Vientiane Sunshine School, Laos, children were sitting on the floor of the library, when the lunch bell sounded. They didn‘t move from their places, but continued to discuss their work quietly, concentrating on their cutting and sticking. Volunteer teachers sat with them, helping to jigsaw the pictures into a poster.

They have been collaging their dream garden together.
After two years of on-going building projects during an expansion period, what remained of the yard were piles of rubble, swampy mosquito pools of stagnant water, and a couple of waterlogged trees valiantly standing on their spindly trunks. 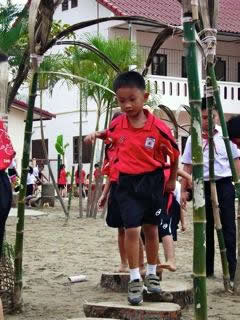 What had happened over time was that the drainage problem had exacerbated as neighbours built bigger houses on raised concrete slabs, effectively pouring their run-off into the yard of the school.

The local decision was to concrete the yard, as everyone else surrounding had done, and make basket ball and tennis courts on a concrete platform playground.

Luckily, it was the hot season, and the discussion of need for shade convinced all involved that trees were most important!

Also, by some miraculous co-incidence, a family from Australia, who are experts in water solutions and permaculture were present at the time.

They set to work immediately to help design and create an effective drainage system. After a week of heavy machinery and digging, the school grounds were dry and able to be planted!

We started a garden project. Another volunteer from Australia had experience in collective decision making and inclusion of teachers and students in design. Together, a dream team of volunteers, administration, and teachers was formed to create a process that involved the children and staff straight away. We surfed the internet, looking for natural designs and sorted images ready for staff and children‘s and parents‘ meetings. Everyone was shown a power-point presentation of choices in playgrounds, different designs and constructions, and the importance of trees. 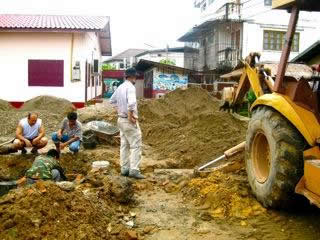 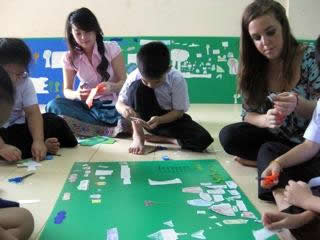 The children started drawing their own designs, which became part of the school collage display for an open house day, with parents invited. The display was mounted and set outside in a bamboo framed tunnel that was planted to sprout! In two months it will be a living tunnel, which the children helped to plant. 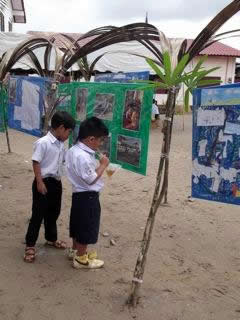 In the meantime, the children were asked how their class would reach the playground, and ideas were circulated of paths with stepping stones, mosaics, tunnels and bridges to be built from each classroom to their favourite place.
The children helped to map their paths, using brooms in the sand, this began some wonderful sand drawings, which still continue today.
They were able to show on a map of the school, where their path would go, and then, the building began…
Stepping stones were rolled, bricks laid, and mosaics planned in chalk. A mural wall has begun next to a classroom that has cement outside. The plan is to paint both the wall and concrete path!
The children‘s dream drawings are coming to life, as more raw playground equipment appears at school, and they take ownership of it! Bamboo poles, tires, wooden blocks, piles of dirt and sand are delivered, the children help to create a new piece of equipment. 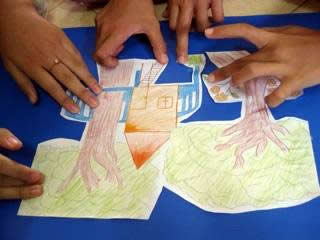 When things are broken, as we experiment with new ideas, the children are quick to try to fix it, or improvise a new game with what remains.
I have seen children pickup sticks (rule, sticks are only for drawing or construction) tie them together and make cubby huts where tea parties take place with the 10 year olds squatting in the sand.
A dozen bicycle tires have been used in a variety of ways, where children are learning patterns, paths, bouncing and jumping games. Friends are invited and balancing is another addition. 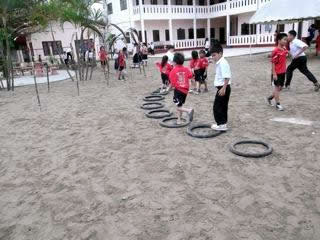 The garden is being planted with trees brought from home, and the children are asking for fruit and vegetable garden beds to plant and care for.
The feedback from teachers so far has been that the school is a safer place to play, that the children are happy, and they are getting involved as it evolves.
It is a community garden and playground in the making, and a wonderful place to play, thanks to a team of teachers, administration, children and volunteers. 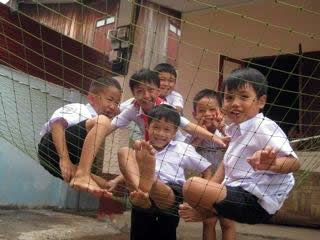