AMGK Italia held a Seminar on the topic of Microvita was held in Pescantina (Verona, Italy) during the weekend of February 22 and 23 and was attended by 30 interested meditation practitioners. The speaker, Dr. Hans Joachim Rudolph, an internist and specialist in Rheumatology, has been practicing yoga since 1972, and is the founding member and chairman of Microvita Research e.V. since 2007 and fellow of the Society for Microvita Research and Integrated Medicine since 2012.

The concept of Microvita was introduced by Shri P. R. Sarkar in 1996 and defined as follows:

There are entities which come within the realm of both physicality and psychic expressions which are smaller or subtler than atoms, electrons or protons, and in the psychic realm may be subtler than ectoplasm. For such objects or for such entities I use the term “microvitum”. This microvitum, or in plural microvita, are not of protoplasmic order, and as such they have got little to do with carbon molecules or carbon atoms, which are treated as the initial points or initial stage of life in this universe. So far as physicality is concerned, the position of these microvita is just between ectoplasm and electron, but they are neither ectoplasm nor electron.

It is a human wont that whatever we know regarding any subject or any object, when we know that it exists but its characteristics or other particulars are not known to us, we say it is “mysterious”. So regarding these microvita, we may say it is mysterious. That is why I used the term “microvitum, the mysterious emanation of cosmic factor”. They are not of protoplasmic order, and hence the question of their protozoic structure or metazoic structure does not arise. They are something mysterious.

In this seminar, Dr. Rudolph elaborated that we may define microvita as the transmission chain which enables unbroken continuity during time and space between the creator and the creation. The entity or entities coming within the conception of the mind are purely abstract, and those coming within the perceptions or feeling of the sensory or motor organs are purely matter. But the position of energy and microvita are on this silver line of demarcation between matter and abstract.

The concept of Microvita has many aspects and applications, and in this seminar Microvita were discussed in relation to the propensities of the mind, effects of and on meditation, and on the body. Here below are some of the statements made therein:

Neuronal assemblies are supposed to be quantum objects. Their electrical activities are transient and irregular, unless they are stabilized by a Quantum Zeno Effect-like interaction, which is, in turn, controlled by microvita. Specific neuronal assemblies represent human propensities, and these are also controlled by microvita. The set of microvita controlling human propensities defines the basic qualities of a person. 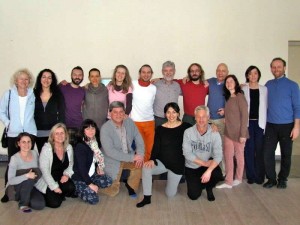 In the process of metempsychosis, it is enough to transfer this set of microvita from the dying to the new organism: It leaves the body with the vital airs (Pranah, including its tanmatras), exhaled at the time of death. Thereafter, two forces maintain its groupification:

Sets of microvita can exist for some time at the borderline between the physical world and the world of cosmic imagination, i.e. in the sphere described by Shri P.R. Sarkar as the silver lining between matter and abstract. From there, a set of microvita may enter a newly born child, consequently taking control over the development and expression of its propensities. If a suitable body is not available, such sets of microvita may also align themselves with aerial and luminous factors, creating what has been called “luminous bodies“. Sets of microvita as well as luminous bodies can help or harm their fellow human beings. Details may be found in Shri P.R. Sarkar‘s writings about Deva and Pretayoniis.