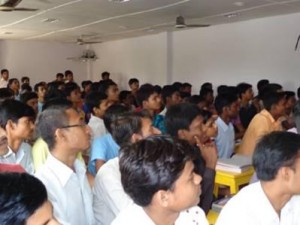 In June students from Bhagalpur Polytechnic College, Marwadi College, TN D College, and Sabore College attended a lecture on how to develop a photogenic memory. More than 50 students attended this lecture. Many students showed further interest and they joined a 3 day intensive training camp. 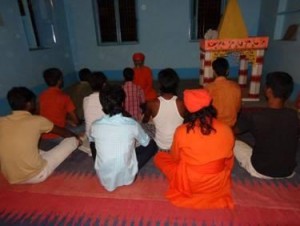 The next day there was a follow up class for interested students at the Khanjarpur Ananda Marga Centeri which is the first Center of Ananda Marga in the world established since 1955. There was a 45 minute lecture followed by body and mind training exercises and collective meditation. 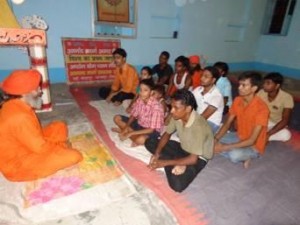 A lecture was organised by Raghuji form Kahalgao at Shiv Kumari Pahadi. Students from SSV College attended the lecture. All the students who attended the class showed further interest in learning more about Neohumanist Education. All came to attend an intensive training camp held from 11 to 13 June 2012. 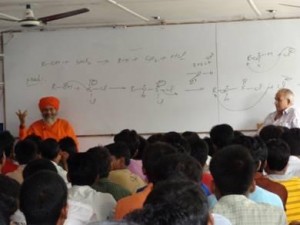 On 8th June there was a lecture at the Global Training Institute. Owner Dharmendra Kumar showed interest in Neohumanist Education. He organised a class for all his coaching students. The class was given by Dada Krpamayananda on Neohumanist Education and Acarya Anup Lal gave very valuable information on meditation and the concept of Spirituality. 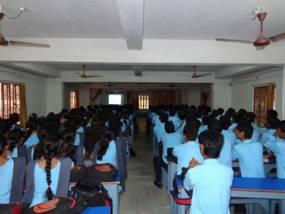 On the 13th there was a lecture in one of the top coaching institutes of Bhagalpur Diisha. This lecture was attended by more than 250 girls and boys. The facility has a big hall with a good audio and visual system. All the students showed interest in attending further lectures.

In Sholapur a school meeting of 700 students was addressed by A’c. Raganugananda Avt, on Bio-Psychology and well appreciated by the staff and the principal of the institution. Baba Nam Kevalam along with initial teaching of meditation was introduced. In Patli College, a class was given on Bio-Psychology where nearly 200 students and staff were benefitted. 175 students attended a class on Bio-Psychology at the Pharmacy College in Sholapur. 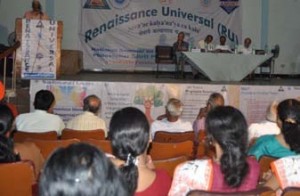 A National Seminar was held on the 1st September 2012 in Patna, India discussing the contributions of Shrii Prabhat Ranjan Sarkar in the fields of Languages & Linguistics, Philosophy, Economics, Music, Literature and others. The program was attended by over 200 intellectuals of Patna and the deliberations during the course of the seminar were well received by the audience and the media.

The speakers gave many recommendations regarding sharing the contributions of Shrii P. R. Sarkar. Here below are some of them.

1. Dr. Sudeepto Adhikari (Former Vice Chancellor, Patna University, Presently Prof. in Geography Department) in his presidential analysis suggested that it must be thoroughly researched why Indian society (and the world at large) has not yet fully recognized the contributions of such a great ideology and a way of life for the welfare of humanity propounded by Shrii Prabhat Ranjan Sarkar.
2. A’c. Vishveshvar informed us that Shrii Sarkar had included two altogether new aspects viz. Spiritual Practice & Human Psychology to the existing four fundamental pillars of Philosophy [viz. Ontology, Epistemology, Axiology {Ethics} & Metaphysics]. He suggested that efforts be made to initiate a dialogue with academia for adopting these new dimensions into the course of studies
3. Dr. Rajnish Mishra prof. of Linguistics, Jawahar Lal Nehru (JNU) University, New Delhi suggested incorporation of the unique ideas given by Shrii Sarkar describing geographical boundaries of languages (or a group of languages) spoken in different areas.
4. Dr. JP Singh, former Vice Chancellor, LN Mishra University, Darbhanga suggested there should be a vigorous discussion on PROUT – its economic approach & the new leadership concept advanced by Shrii Sarkar as the best way to resolve the socio- economic and political problems facing humanity.
5. Dr. Dileep Kumar Sinha famous orthopedic surgeon (Ph.D. Orthopedics surgery) & former Vice Chairperson Minority Commission of Government of Bihar) wished that the magnanimity of revered Shrii Sarkar’s universal ideas and the sweetness of his Prabhat Samgiita be spread everywhere
6. Dr. Prabha Vidya Viveka of Hindi Bharatii, A’nanda ma’rga Gurukul, Anandanagar, represented an institution which is dedicated to enriching and removing the impediments to the path of improving the qualitative standard of Hindi language. She suggested that revered Shrii Sarkar has given many guidelines for improving the Hindi language to improve the language & enhance its life.
7. Prof. Dr. Neera Chaudhary and Dr. Arvind Kumar of the Music Department of Patna University, moved the audience by her soulful narration & singing from the storehouse of Prabhat Samgiita. Her students from Magadh Mahila College demonstrated their adaptability to singing the beautiful Prabhat Samgiita with proper diction & raga. She has taken up the task for herself to popularize Prabhat Samgiita through her students.
8. Dr. Om Prakash Pandey, teacher of English language, suggested that Shrii Sarkar’s views given in his essay on The Literature and the Practice of Arts be made a part of the curriculum at school and collegiate level . 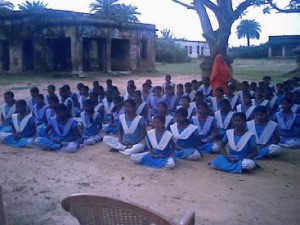 Didi Ananda Jyotirekha organised a one day yoga camp at the Government Girls High School in Pindrajora in Bokaro
Steel City on 19th September. In total 427 girls attended. Classes were held with each class of each grade level separately and instruction given in meditation, yoga postures and kaoshiki. She has an open invitation from the principal to come again anytime to give more classes.