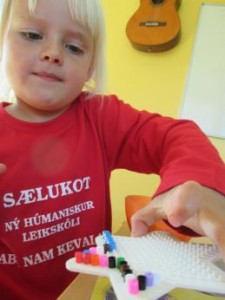 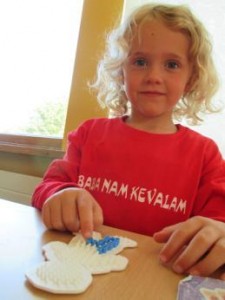 Didi Ananda Kaostubha, principal of Laiskolinn Saelukot, applied to get permission for 62 kids in our extended building, but city allowed them to take 72 kids. The Parent’s Committee decided to have a school uniform therefore now at the kindergarten all the kids come in their school Uniform. This is not very common in Iceland, but most of the parents are very happy to have the school uniform

In the preschool the children and the teachers often create stories and songs together. Here is a story they created about the core value, Ahimsa.

AHIMISA (not to inflict the pain or hurt anybody by word, thought or action)
Once upon a time there were two boys named Noni and Kari living in the Oskulid forest of Reykjavik. One day they went for a walk in the woods and found an abandoned bicycle. They both were dreaming of having a bike and once they saw it they wanted to get on it immediately. But there was only one bike and both of them wanted to have it and so they started to fight. They were both furious, swearing at each other, using bad words like: kukallabe. In his anger Noni bit Kari and the poor boy started to cry. Luckily the parents arrived and separated the angry boys. After the boys calmed down a bit, the mother asked slowly and quietly to the boys: “Do you know, who is the person who deserves the bike?” The boys could not decide. Then the father answered for them: The one, who deserves the bike, is the one who can share it, not the one who possesses it. That was a powerful lesson from the parents that the children learned for themselves. And so boys agreed to share their bike and other things and they remained best friends for many years.

On November 28th the AM River School held their 21st Anniversary Celebration and first School Reunion. There was an unveiling of a giant mosaic celebrating NHE and the school that was made with the assistance of a well known mosaic artist. Dr Michael Towsey, Director of Board of River School in Maleny, Australia and an active academic member of Gurukula visited AMGK Global Liasion Office in Ithaca and exchanged areas of future collaboration.

The Melbourne Sunrise Preschool is making a children’s music album, and has bought a property for a second pre-school. 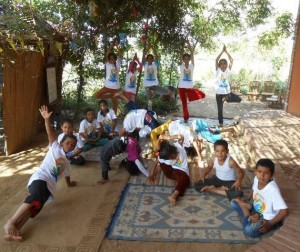 There are two projects in Egypt. One is in Cairo, where regular yoga and meditation classes are in great demand and need a regular teacher. The other is the Nile River School in a village that needs help in supervising. The trained volunteer could alternate between these two projects or stay in one of them.

This project is a charity kindergarten and after school programme for the village of Baharwa near Al Ayat on the Nile, one hour south of Cairo. There are 150 families of settled Bedouins and farmers. There are about 80 children who come to the Nile River School, about 50 regular others occasionally. The children go to public school but many lag far behind and need help in basic academics and learning skills.

There are 3 local teachers and a supervisor who help with the daily educational programme. On Fridays volunteers come from Cairo to do activities with the children and do developments work in the village. The job for the volunteer would be to live on the site and supervise the general flow, keep the sentient vibration, maintain cleanliness of the school and garden with the help of the children and staff and help in any creative way with the educational programme. 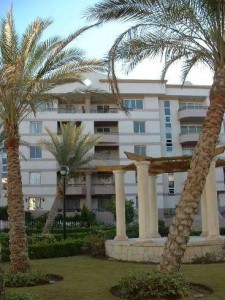 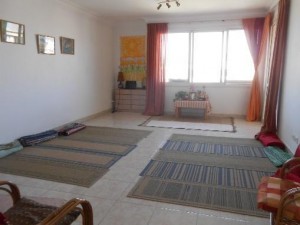 The location of our center (which is also where we stay) is in a safe and green suburb with good bus and metro connection to downtown Cairo. Yoga and meditation classes, courses, DC and related programmes can be offered. Interested volunteers can come on a tourist visa which can be extended. Minimum stay would be 2 months, but preferably 6 months. Volunteers would have to take care of their personal expenses but could use 50% from their yoga classes and related programmes. English language as medium of conversation is fine.