Fast-forward to the Future for Romanian Teenagers 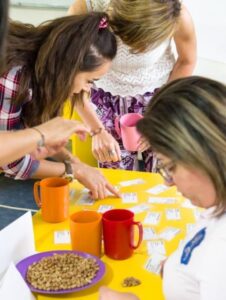 In March 2019, the “I am also in the Community!” Project, which ran in partnership with CPE (Center of Partnerships for Equality), and was financed by the “Fund for Social Innovation”, successfully concluded. The project offered interactive civic engagement activities to 223 sixteen-year old youth from five disadvantaged urban high schools in Bucharest.

I designed a series of innovative tools to give these 16 year old students a chance to “Fast Forward” into the responsibilities and challenges of adult life, as well as to discover and practice ways to become engaged, active citizens that are empowered to be part of solutions rather than contributing blindly to the problems of society.

There were four main modules of the project: “Fast Forward – Managing Resources and Happiness”, “Youth can change the world – addressing social injustice”, “Activist tools for civic engagement” and “Social enterprise – can business change the world?”. 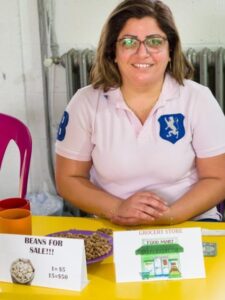 As an ancient Chinese Confucian philosopher, Xunzi, said “I hear and I forget. I see and I remember. I do and I understand.” Within the project, I developed several original simulation games and exercises designed to teach practical life skills in a fun, interactive and memorable way. The simulation games that were used in the modules were complex, engaging and fully immersed the learners in experiential learning.
In the “Fast-Forward: Managing Resources and Happiness” game, the youth had to manage several variables that reflected real life, adult responsibilities. They received a salary in play money with which they had to pay bills and rent, buy food to have enough to eat every day, as well as face unexpected surprises they pulled from the bag of “destiny”. A few examples of destiny cards, “You forgot to pay your bus ticket, and receive a fine of 100 lei.” “You buy new clothes for work – 300 RON” or “You go for a walk with your friend in the park.” Destiny cards often required spending money, but not always. Money wasn’t the only variable that they had to juggle, as destiny cards also often had either smiley faces or sad faces on them. The young people had a score card to accumulate the stickers symbolizing the happiness or stress associated with the destiny cards. 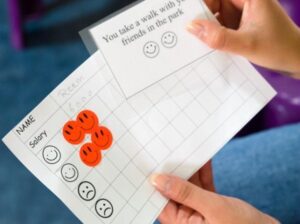 The premise of the project was that many of the most disadvantaged youth in Romania, have parents that live off of meager welfare allowances, and have never held a steady job, had a savings account, or made a budget. As these skills and behaviors are not explicitly taught in school, and there is a lack of modeling in the family, such youth are at high risk of simply perpetuating the cycle of poverty, as they know no other alternative. However, during a simulation, youth have the opportunity to identify with the role of a doctor or lawyer, and experience what it is like to manage such resources. One of the most important aspects of the game was the reflection process at the conclusion, in which they had a chance to observe if there was a correlation between happiness and money. Usually there was not, to their surprise! However, when they thought about it, it made sense. During the game, all of the participants were very happy to get cards that had no price-tag attached, that only brought them happiness stickers such as “You spend time playing with your child”, or “You volunteer at a local soup-kitchen.” Indeed, when I designed the destiny cards and the game, I purposefully embedded positive values and messages within, to help them to experience, for example, that there is more to life than money. I also designed in common pitfalls that I have witnessed youth from AMURTEL’s “Vistara” (transitional apartment for youth leaving protective care), such as gambling their money or spending too much money on cigarettes. 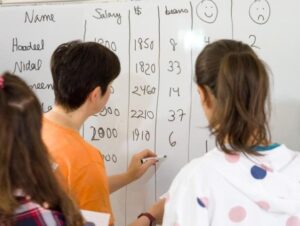 In another of the games, the youth entered into a diversity of roles regarding a controversial issue in a fictional village. An oil company wanted to buy land from farmers, to be able to drill. Some of the youth were landowners that would benefit from the high price the company was offering, others were mothers worried that the oil would poison the well waters. Some were activists for an ecological non-profit and some were from opposing political parties. They had the opportunity to gather support for their position from other community members, and at the end of the game, an election was held. This was again a rich opportunity for discussion and de-briefing following the experience, and allowed them to experience themselves taking a stand in society for their convictions. A few of the groups really dazzled me by spontaneously coming up with very progressive ideas about how they need to protect their local economy from the invasion of the corporation which would not really provide any true benefit.

After the conclusion of this successful pilot project, I hope to attract more funding to be able to expand the project and bring it to more schools in the country. In the meantime, I already did training in the method for the team in Lebanon that is doing vocational and life-skills training with youth, and I introduced some of the tools at the PROUT Convention in Copenhagen.