A yantra for personal and social revolution

In order to manifest neohumanism, a revolution in thinking is necessary both on the individual and collective level. This article is going to explore Paulo Freire’s idea of “Transformative Praxis” and how it can be applied individually and collectively to bring about an awakening of conscience. 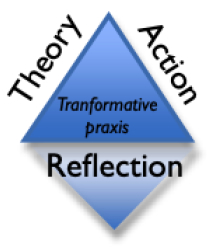 I think of a transformative praxis as a type of yantra working for individual or collective change. A yantra is a machine. A machine does some work, changing the inputs into the outputs / outcomes, changing one type of energy to another. For example, a car could be seen as a yantra. The energy input is petrol / gasoline (unless you’re lucky enough to have an electric car) and the output is motion – the car taking you where you want to go. Before exploring what the inputs and outputs for the yantra of a transformative praxis might be, what on earth is a transformative praxis and what elements are necessary for it to work? The word transformative implies change, and the word praxis is the process by which a theory is embodied. So the name already suggests 2 of the key elements necessary for this machine to work – theory and action. It is of little use learning anything in life if it is just to remain as knowledge, as a theory. To make use of it, it needs to be embodied, put into action. The third necessary element necessary for this machine is reflection. Reflection can be applied at both stages – reflecting on the theory before acting on it, and reflecting after putting it into practice. Initial reflection on a theory might be like asking yourself “Is this theory logical or illogical? What are the pros and cons? Is it relevant in my life / this situation? If it is applied, will it bring welfare to all? How am I / are we going to implement this theory in this situation?” Reflection after action might sound more like “Did it work? Did it achieve what it was intended to? How could it improve?” The theory can then be re-created and put it into action again and then evaluated/ reflected on again put into action etc.

On the individual level, this yantra starts with study. According to Shrii P. R. Sarkar, study is the first step towards the establishment of neohumanism. Study is not reserved for the literate population, but includes reading books, having conversations, listening to others, observing nature, watching videos etc. Study all sorts of subjects including worldly and spiritual subjects / theories through whatever media available. The important part is to not just learn and then forget, but reflect on what has been learnt – evaluate whether what has been studied is rational and also consider what effect it will have. Put it into practice in the way that will have most benefit and then reflect on the outcome. This process will, according to Shrii Sarkar, lead to the development individually of a rationalistic outlook or awakened conscience which he gives as the second step necessary in establishing neo-humanism.

In terms of a yantra on the individual level, the inputs might be the effort and energy given to study, reflection and action, and the output might be the awakening of conscience.

The transformative praxis yantra can also work on the collective level to bring about social change. By combining our energy and working together we can achieve a collective goal. According to Paulo Freire’s change logic model, engagement in a transformative praxis will usually be precipitated first by an awareness that something isn’t working well in society (what he calls conscientisation), and then a resistance will develop to that antisocial element, which is a stage where determination and strength are gathered to do something about it (which would be to engage in a transformative praxis or project).

This is usually illustrated in a linear model:

An example of this process from here in Aotearoa (the indigenous name for New Zealand) is in the Kōhanga Reo movement. Through the process of colonisation including the educational systems of past (devastatingly children used to be beaten if they spoke Māori at school) Te Reo Māori (the Māori language) had declined to a state where less than 5% of school age Māori children could speak their own mother-tongue.1 Te Reo Māori was in the real threat of being lost forever. A group of Māori who realised that something needed to be done urgently (in this model they were conscientised and had developed resistance) worked to establish the first Kōhanga Reo in the early 1980s. Kōhanga Reo are pre-schools/ kindergartens that are run by Māori, with Te Reo Māori as the medium and are immersed in Māori cultural values. Kōhanga means nest, so they are little language nests all around the country. In this model the Kōhanga Reo was the Transformative Praxis. The Kōhanga Reo movement was hugely successful. By 1991 there were 630 Kōhanga Reo operating, with a total enrolment of 10,451 children. As you can imagine, the benefits went far beyond just reviving the language. 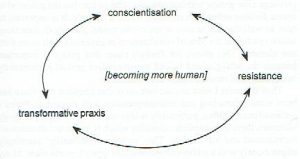 Although this example could be seen to validate a linear change logic model, Professor Graham Hinengaroa Smith asserts that the change logic model given by Freire is not linear, but is instead a cyclical process and that one can begin at any point. The first step does not necessarily have to be conscientisation, but instead may be being involved in a transformative praxis, which itself may lead to conscientisation.

An example Smith gives is of a parent who had sent their child to their local Kōhanga Reo, not because the parent was conscientised and realised that it was important for their child to learn his mother tongue, but because there were no other kindergartens in their area. This parent, through their involvement in the Kōhanga Reo (the transformative praxis), became conscientised and realised how important it was to nurture their language and cultural values. They then went on to be involved in other projects to empower their community and their language. By viewing the change logic model as cyclic makes it more inclusive- people can start where they are at. The problems are multi-faceted so there need to be many approaches on all levels.

Once children started graduating from the Kōhanga Reo, a new problem was encountered – there were no schools run in Te Reo Māori for these children to attend. The next challenge was to create schools run in a similar manner. These now exist and are called Kura Kaupapa Māori. Kura means School, and Kaupapa Māori means a Māori approach. The next structures to be created were the Wananga- (Māori universities).

An important point that Smith makes is that in order to be revolutionary, a transformative praxis needs to include both the cultural and the structural elements. The cultural element means that they have to suit the style of the people they are intending to benefit – in Sanskrit this would be the Prana Dharma and this includes language, world view, customs and all other elements we think of with culture and mental approach. The structural element means that it has to make a difference in the real world. For example, the wananga teach what the people want to know, things they can put into practice in their lives that will make a difference to them economically, socially etc.

“The wananga is the community; it represents the dreams and aspirations of the Māori community and iwi…We ask what communities and iwi need, and try and cater for them. If they need wakaira (carving) training, then we can help. If they need wharepaku (toilets) then we bring a building programme in. We can respond to their language, cultural and knowledge needs as well as vocational interests and so on. We engage with all forms of knowledge- Western forms and Māori forms. It’s not either / or. There are multiple elements that fit within the framework of Māori development.” 2

There is a term that is used frequently in Aotearoa which is Tino Rangatiratanga. This can be interpreted as self-determination, or empowerment and it is the key to any successful project. The creation of these educational structures of Kōhanga Reo, Kura Kaupapa Māori and Wananga over the span of 30 years from 1980 – 2010 marked an educational self-development revolution for Māori. Graham Smith says that although these actual educational structures are what we can easily observe, the real essence of the revolution was the change in mind-set in Māori from waiting for things to be done to or for them, to getting up and doing things for themselves.

If we are not already, now is the time to start making some real conscious change in the world by uniting with others and working together on projects that will make a real difference in our collective lives, in a way that is aligned with our local cultural values / prana dharma and includes the essential elements of theory, action and reflection. This will surely create the revolution that we have all been waiting for.

Madhumita O’Brien is a naturopath living in Nelson, New Zealand and working in public health in a role to increase access to health services for Maori, Pasifika and Asian women.