By Tara Macphail and Didi Anandarama

SPROUT or Student’s Prout is about teaching Prout to students via NHE schools, public schools and STUVOL programs and through people working with children in non-school settings, such as after school clubs, youth groups, festivals, retreats etc. In July, 2009, at a Prout Convention in Copenhagen, a group of educators offered a Prout activity to the children present utilizing the template for creating curriculum which was developed at the NHE Conference in Australia last April and shared in the last issue of Gurukula Network. Here below is first a review of the template, and then the Prout activity that was offered to the children at the Prout Convention.

Why – The objective of the lesson in terms of NHE Philosophy
Who – Characteristics of the students (age, culture, number of participants)
What – Outline of the activity
How – The method used to achieve the outcomes of the activity (story, game, PowerPoint presentation, dance, song, etc.). A variety of methods can be chosen to address multiple intelligences and different styles of learning.
Where – Where is the activity going to be held? Adjust the content for local use
Resources – List the resources that you require for the activity
When – The time and date of the activity
Facilitators – Who will facilitate the activity and what is their role/s
Evaluation – Evaluation by the participants and also the facilitators

Why – The objective of the activity was to teach the third principle of Prout, “Maximum utilization of individual and collective potentialities”, which refers to using resources for collective welfare.

Who – 4-10 year olds; 6 children from mixed cultural backgrounds and parents

What – The storybook Golden Lotus of the Blue Sea, by Shrii P. R. Sarkar was used to teach the idea of using individual resources (e.g. creative problem solving, intellect etc.) for collective welfare. (This newly published book is available for purchase; please see the section on publications for sale.)

Start by reading the first part of the story. Then explain that the storytellers had a spell put on them by the demon and that they need help to break the spell.

Where
Shed, outdoor area at the Prout Conference sight

Evaluation
Children were very engaged throughout the whole game. They worked well together as a team and also used their individual talents to solve the challenges. The suspense of hearing the end of the story was also motivating for the children. They experienced achievement of solving the puzzle and helping the poor people and the story teller.

Improvements: We had to adjust to a language that we were not expecting. We needed more detailed information on the languages that needed to be translated before the activity. During the challenge activities, the overall thread of the story could have been implemented more clearly. We also had to adjust the height requirement of the Unity tower as we set it too high. This was done well in the moment, maybe we could have tried the activity before hand to see how easy or difficult it was.

The facilitators realized that the Golden Lotus can be adapted in various ways and various ages as a game. 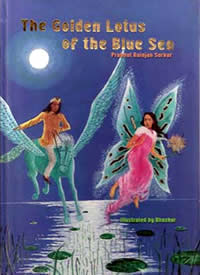 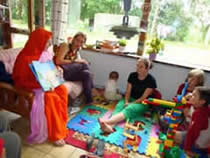 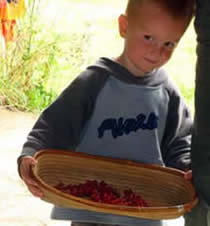 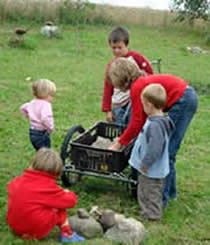 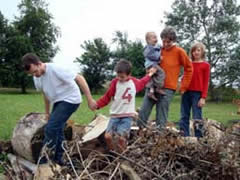 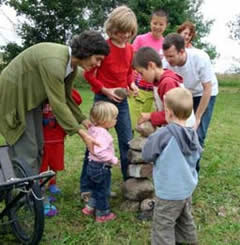 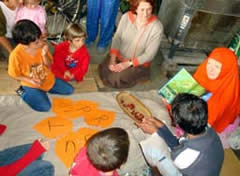