This year AMSAI La Pinas opened with 18 children. The children are aged from 3-6 and they are divided into 2 sessions (ages 3-4 in the morning and ages 4-6 in the afternoon). The school is being managed by the new DSL Didi Karunamayii. The school is fortunate to have two volunteers: Malati selflessly volunteered full time to teach the children since last year, even staying very late at night to make visual aids and prepare her lessons and for late meetings when they are called. Sadhana also volunteered part time in the mornings 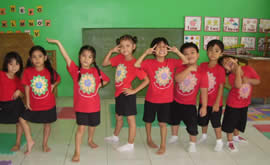 In the beginning of the school year, some of the children were “difficult “but through our weekly meetings, we evaluate each child and brainstorm on how to help them develop and improve. After few months, improvement of the children’s behavior has been noticed even by their parents and it makes it easier for the teachers too. 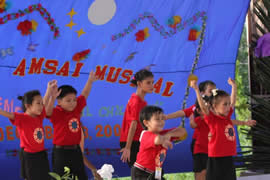 Before the opening of the school, we called a parents meeting and gave an orientation to explain the school’s philosophy especially the importance of vegetarian food as we strictly imposed a vegetarian diet which is prepared by school volunteers. This was not easy as the school’s limited staff has to prepare and serve the food and the children were looking for the meat in their spaghetti in the beginning. But we experimented with about 30 healthy different vegetarian dishes and with a little encouragement the children learned to like our menus. Now the children are already used to eating vegetarian food and sometimes they even request what they like especially fried rice full of veggies and boiled sticky rice with locally produced chocolate and we also prepared yoghurt which is not popular with Maharlikans but our children liked it. Parents really appreciate the healthy food which they also sample when we have school programs. 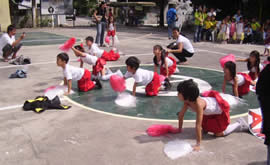 In the first quarter of the school, we organized a parents’ seminar on SMART CHILD (Multiple Intelligence) which the parents appreciated. Feedback that we got back from the parents includes improvement of their understanding of their children and realizing that their child is not only an intelligent child but a child with unique intelligences which also need to be developed.

Last Christmas, the school in cooperation with the parents organized a public show dubbed as The AMSAI Musical. The show highlighted the children’s talents. It was held last Dec. 13 in a covered court and was attended by about 100 people. The children presented and entertained their parents and guests with local dance, action songs, and yoga postures. The program was different as the presentations were all local and native dances and songs plus yoga postures which the children easily performed to the delight of the parents. The program was successful due to the cooperation of the parents, support from sympathizers and by Grace.