The Transformative Power of Neohumanist Education in Social Change

Presented at the Neohumanist Education Conference in Caracas, Venezuela 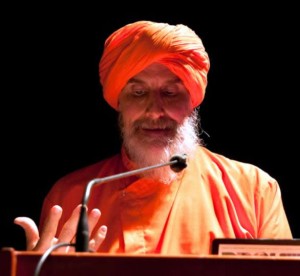 1. Why a revolutionary monk?

I am a yogic monk who teaches meditation – and I am also a revolutionary. This may sound paradoxical to you, but actually it is the deep peace and love that I experience in meditation every day that compels me to work for social change. The orange uniform I wear means that my life is dedicated to serve humanity. Because injustice, exploitation and poverty cause so much unnecessary suffering, I am committed to the struggle for a better world.

The global capitalist economy works very well for some people, but not for everyone.

I wrote a book called After Capitalism: Economic Democracy in Action because I believe that global capitalism contains the seeds of its own destruction, because it is based on profit, selfishness and greed. The excesses of globalization have caused untold human suffering and environmental degradation. The tremendous concentration of wealth in the hands of a few means that capitalism excludes more people than it benefits. The tragic result is that today nearly half the world’s population lives, suffers and dies in poverty. A poverty that is completely unnecessary.

For example, look at how capitalism in the richest country, the United States, is affecting higher education. University fees there are the highest in the world and climbing, while state and national government financial support is shrinking. Nearly 20 million Americans attend college each year, and close to 12 million – or 60% – borrow annually to help cover costs. In October 2011, the total amount of money owed in student loan debt exceeded $1 trillion, – students have $20,000 or $50,000 or even more than $100,000 loans. This is an inhuman load, exploiting young people and their families when education is a human right to be available to all.

Injustice and exploitation are why when I was a university student I hung a poster in my room with these words by Che Guevara: “At the risk of sounding ridiculous, I would say that the true revolutionary is guided by great feelings of love.” I thought, ‘That’s what I want to be, a revolutionary guided by love.’ Later I learned yoga and meditation and started feeling more love and happiness than I ever dreamed possible. So I went to India and became a monk, inspired by Shrii Prabhat Ranjan Sarkar and the Progressive Utilization Theory (Prout). Prout is the acronym for Progressive Utilization Theory, a new socio-economic model based on self-reliance of each region, cooperatives, environmental balance and universal spiritual values.

So when you find injustice, exploitation, racism or sexism, how can you respond? There are basically three ways. The first one is silence. You can think, I’m not going to speak out because I’m afraid, or because I’m afraid of losing my privilege.
The second possible response is reform. You think I want to change it gradually. The “gradually” is my only problem with this one. I don’t want everyone on the planet who I want to help to be dead by the time we finally get the reforms. So a third possible way of acting in the world is revolution, to courageously struggle to end exploitation and save lives as fast as possible. That’s me. That’s also Sarkar. “The most powerful weapon on earth is the human soul on fire.”

When colonialism gradually collapsed during the twentieth century, capitalists developed clever techniques to continue their exploitation of the newly independent countries. They tried to capture the minds of the people and paralyze their collective outlook to prepare them for economic exploitation. Consumer culture, with its appeal to material pleasures, portray a life that is seemingly more pleasurable than one’s real life. “Look honey, I bought something.” “Oh darling, I’m so proud of you!” What did he buy? It doesn’t matter, it could be a car, shoes or a coca-cola. But look at their faces – happiness forever! I think it’s a lie. Happiness doesn’t come from things. Such ads make people want to be rich and white, like all the actors and models they see. Most Venezuelan children see their parents struggling, living with much less income and fewer material goods, and so start to develop a low self-image and inferiority complex.

The goal of education, according to Sarkar, should be liberation, to free people from mental bondages and limitations and to promote solidarity. He said that teaching is one of the most important professions. “The salaries of teachers in every country should be on par with, if not higher than, the salaries of public servants in the judiciary and the executive.” Education, both formal and informal, should be society’s highest priority, available to all free of charge. Whereas the government should fund education, schools and universities should be administered by educators, free from political control.

Neohumanist education opens peoples’ minds to see the lies of convenience and hypocrisy of those in power. Paulo Freire was a very great educator from Brazil who emphasized that education should free people from dogmas and inferiority. I interviewed him in 1997, one month before he passed away. He said, “What is generally emphasized in Brazilian schools is the transfer of a mechanical knowledge of biology, geography, history and mathematics that minimizes one’s presence in the world. My growth does not end with the technical training of superficial knowledge. Yet this is neo-liberal education, what they call pragmatism. For me, no, education is the learning experience, in both teachers and students, what you call the capacity to meditate and the feeling of transcendence. It is an experience of critical reflection about our presence in the world.”

3. Transformative ethics to teach and live by

According to a 1995 study published by the American Association of Psychiatry, the most common factor amongst criminals is the tendency to lie. Strangely, this same defect is also common among some very rich and powerful people. Throughout history, powerful classes have created moral rules and laws to maintain their power. Hiding their ugly nature through hypocrisy and clever lies, they have imposed dogmas, fear and inferiority complex in simple-minded people. For example, in various parts of the world some religious leaders have taught, without any evidence, that in some mysterious way men are spiritually superior to women. What nonsense!

Cardinal human values are principles that could be taught in all schools from kindergarten to post-graduate level, and in the whole society. For example, honesty, courage, mercy, humility, self-restraint and compassion. To protect the weak, avoid harming others and overcoming selfishness. What do you think? Are these the types of values we want our children to follow?

Teaching cardinal human values is very important, awakening in the students a sense of responsibility for the welfare of others. Our education should begin with mutual respect for different outlooks and ideas, and strive to increase awareness and awaken consciousness.

Prout believes that leadership is important, because the world needs leaders with moral force, spiritual vision and courage to fight injustice and exploitation. Anyone can become an ideal leader by setting a personal example. I think of some of the people in the landless people’s movement in Brazil who I met who were illiterate, or who had very low levels of formal education, and who were some of the wisest, courageous, most outstanding and inspiring speakers I’ve ever met in my life. They were really revolutionaries. Two examples are Rigoberto Menchú from Guatemala, an indigenous woman who received the Nobel Peace Prize and Marina Silva, a rubber tapper’s daughter in the Amazon, who was illiterate until the age of 11 who is a powerful leader and who became minister of the environment.

Paulo Freire said, “One of the major struggles in every individual is to diminish the difference between what one says and does, between the discourse and the practice. Ethics really is fighting to decrease the distance. I think that in politicians one will encounter the maximum distance between the two, after being elected his or her actions do not look at all like the discourse.” A North American activist, Bill Ayers, said, “We must figure out how to become the people we have been waiting for.”

To make a peaceful world, we need a more cooperative world. One technique of popular experiential education that I find personally fulfilling, is leading workshops of cooperative games. These activities promote kindness, honesty, trust and teamwork. In this game, everyone is giving a back massage to the person in front – it feels great!

Do you remember the children’s game, musical chairs? When the music stops, everyone tries to sit down, but there are fewer chairs than players, so those without are eliminated until you end up with one winner. But you can play the same game cooperatively, so that 26 kids and adults are all sitting on only one chair! You can also levitate people together, and you can even fly with a little help from your friends! It takes an hour to train the group step-by-step, but it is very exhilarating to jump off and be caught by your friends.

Prout has an ecological and spiritual perspective that is lacking in many economic philosophies, but is still present in traditional societies. Indigenous spirituality invariably revolves around nature and the connection to all forms of life. Indigenous peoples did not believe that the land belonged to them, but that they belonged to the land.

I would like to clarify the major differences between dogma and spirituality. Fundamentalism is closed minded, blind obedience and instills fear. Dogmas divide people into believers and nonbelievers, “us” against “them.” In contrast, the mystical quest for the truth is open-minded, asks questions and promotes love. Spirituality sees everyone as a human family, and is universal.

Prout’s spiritual perspective recognizes that all humans have a thirst for peace and happiness. We need to journey inside to find true peace and happiness, to find the connection, meaning and purpose of life, which is self-realization and service to humanity. One of the most inspiring quotes of Shrii P. R. Sarkar is the words in the dedication of his book, The Liberation of Intellect: Neohumanism. They exemplify humility, magnanimity, and compassion:

“To those who think for all…
Who offer others seats of honor and respect…
Who venerate others, instead of waiting to be venerated –
To them I dedicate this book with humble esteem and deepest salutations.”

I leave you with two thoughts about the transformative power of Neohumanist Education: we need to awaken students and everyone about injustice and exploitation, and in that process we need to inspire them to build a better, cooperative world together – we need a revolution that is based on love.

Finally we need to help students and everyone to discover their inner happiness, and, in the words of Joseph Campbell, to follow their bliss. Because with love, everything is possible.

Dada Maheshvarananda is a yogic monk, activist and writer. He is the founder and director of the Prout Research Institute of Venezuela (www.priven.org). He can be contacted at .