Zurich, SwitzerlandTatjana Popov, the director of the Sunshine Playgroup, has started using the NHE Introductory program for training the teachers in her school . The first class included exploring qualities important in a teacher, and the layers of mind. Please note an important correction from last issue of Gurukula Network where Jovan Drapsin was mistakenly named as the director. Jovan helps a lot in the school but Tatjana Popov is the director. Stockholm, SwedenAn orientation seminar on NHE was held at Sunrise Play School in Stockholm, Sweden. 15 teachers participated. Ac. Shambhushivananda gave a three hour introduction and Marianne led the workshop on Non-Violent Communication. 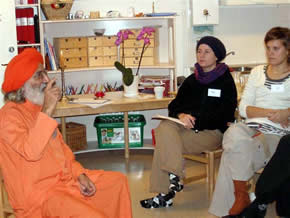 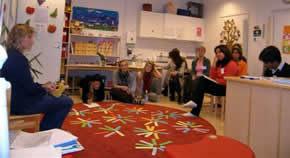 Panatau, RomaniaFountain of Hope, the new after school project in Panatau, has opened its doors after overcoming a significant obstacle with the mayor who was insisting that meat be served. That obstacle delayed the opening of the project for two weeks, but finally, was resolved without compromising on the diet. Already they have 25 children benefiting from the hot vegetarian lunch and from help with homework and access to computer equipment. They are very happy and grateful for this opportunity. The children who are benefiting from this service are selected by the social service worker of the community from extremely poor rural families. So this project is aimed to help break the cycle of poverty that comes from lack of education due to dropping out. The project is in urgent need now of sponsorships. For more information contact Didi Ananda Devapriya at anandadevapriya

mac.comMadhu Karuna, GermanyKulapati led a workshop on “Global Citizenship and the Future of NHE and Gurukula” that was well attended.