The degree of income and wealth inequality has reached such proportions that we are no longer able to actually comprehend its magnitude. What does it actually mean to say that someone earned $100 billion in a single year? We know that 1 billion is a big number, but it is difficult to know what the difference between $1 billion and $2 billion really means. Here is an illustration that helps us to picture what is taking place with respect to the distribution of income and wealth. Imagine a football stadium filled with 50,000 fans, one fan to each seat. Now we begin to distribute the seats unequally, and we attempt to squeeze 49,999 fans into one seat, while the remaining fan is free to take any of the remaining 49,999 seats. This is what we are attempting to do with income and wealth. One person gets to own virtually the entire stadium, and the rest of the world’s population must fit into one seat!

Inequality of this magnitude raises many concerns. In this article I will look at just one of these concerns, fear concerning the impact of technological change. Technological change has always raised fears in the minds of workers, fears of lost jobs and fears of lost ways of life and community. The Luddite movement, named after Ned Ludd, a British worker who lived in the late 1700s and who supposedly destroyed several knitting frames, was one of the earliest expressions of such fear. The development of new technology in the early 1800s raised concerns that workers would no longer be needed to produce output. In response, the Luddites undertook several raids in which machines were destroyed. But, while Luddites have been portrayed in history as being anti-technology, the truth is that their real concern was to ensure that technological change would be used properly to the benefit of all.

Economists are fond of pointing out that fears concerning technology have been largely misplaced. The common refrain that we hear economists exclaim is that technological change has always produced more jobs than it has destroyed. While this has been true up until now, the simple concern with numbers of jobs created and destroyed misses the essential fear that both Luddites and modern-day workers share. While in the long term more jobs may be created than destroyed, this does not guarantee that the new jobs created will be occupied by those who have lost jobs, nor that the communities experiencing job loss will benefit from the new technology. While technological change may bring net gains, the beneficiaries of such change quite frequently are not those whose jobs and communities have been destroyed. Quite simply, the gains from technological change are rarely equitably distributed.

Concern over the impact of technological change is once again rising among both economists and the general public. One example relates to the development of new forms of energy. During the last presidential election, Donald Trump promised that he would bring back the coal industry in the United States. Now there is virtual unanimity among energy experts that this will not take place. Technological advancement has made natural gas both economically more efficient and environmentally less harmful (though still harmful!) than coal. Numerous studies have demonstrated the adverse health impact that coal mining has not just on coal miners themselves, but on everyone living in a coal mining area. Rates of cancer, heart disease, and hypertension are all significantly higher in coal mining regions. Life expectancy of coal miners is just 53 years, more than 20 years less than average life expectancy. Indeed, in coal mining areas, life expectancy for everyone has been declining. One might expect that such statistics would make states such as West Virginia, where coal is a prominent source of income, wary of any presidential candidate promising to reestablish the importance of coal. Yet West Virginia voted for Donald Trump over Hillary Clinton by more than 42 points, the highest difference of any state in the country, a difference that is unusually large by any historical standard. Were West Virginians expressing an irrational hope for the comeback of an inefficient and environmentally destructive technology, or were they simply expressing the desperate hope that they and their communities not be victims of advancing technological knowledge which, while beneficial for human society overall, would not be beneficial to all? One simply needs to look at the desperate shape of the Appalachian region to know the answer to this question.

For economists, technological progress is simply an unmitigated good. In its simplest form, technology is just a body of knowledge that enables us to utilize resources to produce output. Improvements in technology are simply improvements in our knowledge. Improvements in technology mean that we can produce more output with fewer resources, i.e., that production efficiency is increased. And, in the long term, the standard of living of a society can only be increased through technological gains, that is through productivity increases that come about through technological improvement. Unfortunately, economists rarely look beyond the efficiency argument to look at the distributional impact on both individuals and communities. And, as the recent work of Thomas Piketty so clearly reveals, this lack of attention to distributional aspects is helping to foster the growth of social tensions to such an extent that social stability itself is threatened. When productivity increases, it is possible for workers to receive higher wages and for businesses to receive more in profits. When everyone sees their standard of living increasing, there is much less of a conflict over the fairness of a given distribution of income. But what recent empirical evidence clearly demonstrates is that while productivity gains continue to be made, wages in countries such as the United States have stagnated. This means that workers are more productive, but are receiving a smaller and smaller slice of the economic pie. The distribution of income is becoming more and more unequal even as technological progress is made.

It is in such a context that technological progress comes to be feared. But it is not technological advancement itself that should be feared, rather it is how the gains from technological advancement are distributed and how these gains impact communities. The great danger we now face is that the gains from technological improvements are accruing to only a small segment of the world’s population. And, while technological gains, at least in the long term, benefit humanity as a whole, in the short term they often destroy communities, especially communities that become overly dependent on a small range of activities, activities that can be made superfluous through technological progress. There are many individuals and groups developing solutions to these problems, solutions that involve education, job guarantee programs and programs that help communities become more self-reliant and sustainable. It is time for us to listen to these individuals and groups.

When Dr. Pari Spolter* did calculations, using data about the known weight and velocities of spacecraft, space-stations and satellites orbiting the Sun and the Earth, she found that the textbook Newtonian formula for gravity does not hold up. Her alternative model concludes that the attraction is attributable to a centripetal force as opposed to Newton’s linear force which neglects the spin of the Sun and the Earth. In my opinion, this shows some similarity with Shrii P. R. Sarkar’s views on Cosmology as elaborated in his discourses on Brahmacakra – the Cosmic Cycle of Creation.

I have accumulated a body of astronomical and geodetic evidence in support of Dr. Spolter’s research and Shrii P. R. Sarkar’s yogic philosophy, the hypothesis being that the centripetal force relates to the electrical/magnetic/torsion-field effects of spin, and that tidal forces are attributable to the rhythmic interplay between the gunas. This research is based on neglected mainstream studies, common sense, and ongoing practical plant experimentation. If you are interested in this topic and would like to see/comment on a working draft entitled, The Crimson Glimmerings of a Spiritual Cosmology, please contact me. 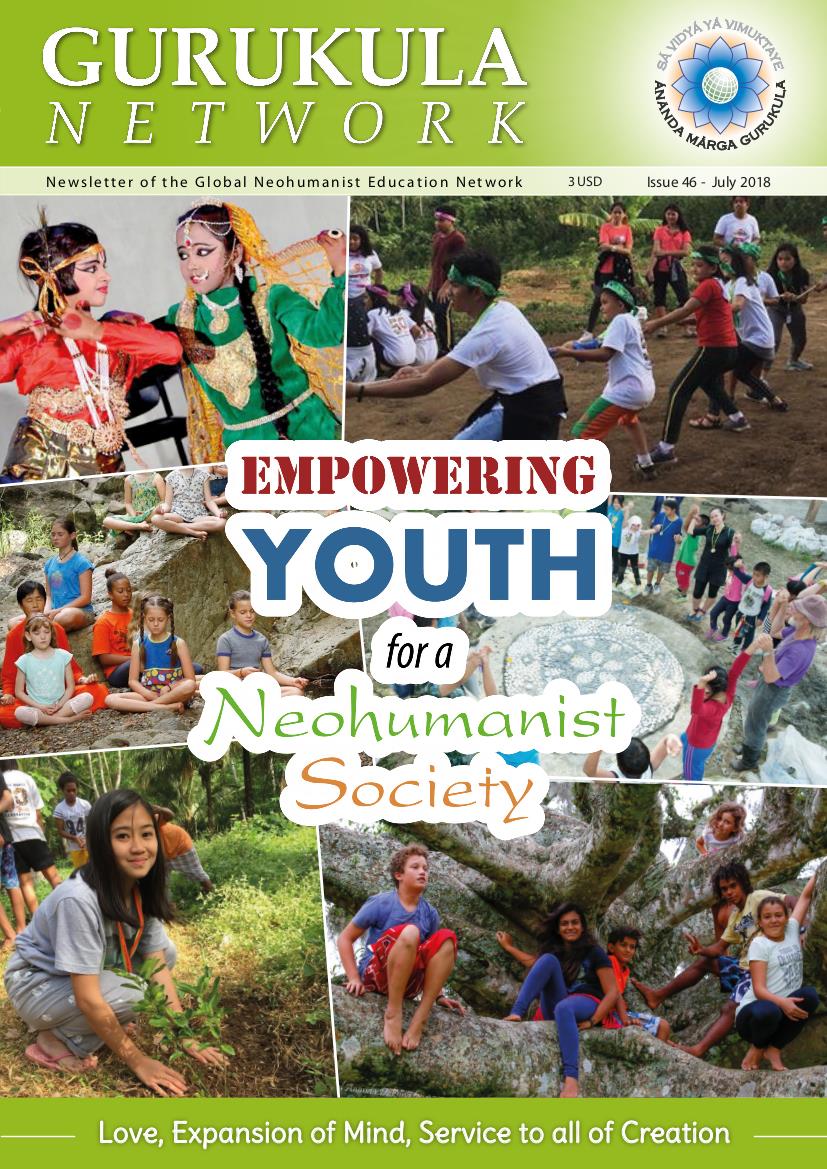 Conferences and Events – Recent and Upcoming

Empowering Youth for a Neohumanist Society