The AMGK Education Conference on the theme of “Educational Activism: Building a Compassionate and Sustainable Future” to commemorate the 25th anniversary of AMGK was held on 10-13th April, 2015 in Al Mahaba School, Kfar Nabrakh, Chouf, amidst the beautiful snow-covered mountain ranges of Lebanon. 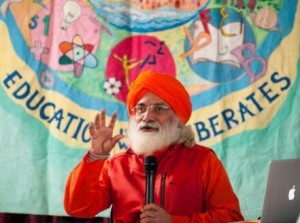 The program was introduced by the local dignitaries and the keynote speech was given by Acharya Shambhushivananda Avadhuta. He stressed the need to recognise the sacredness of the task of educating the young with an awakened conscience. Utilizing the metaphors from science and spirituality, he further inspired the AMURT workers who have drawn up a plan to establish a Neohumanist school in the vacant facility of Al-Mahaba School where incidentally the conference was being held. 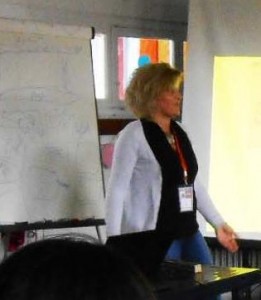 Dr. Nadia gave a very educative and informative workshop on “Using art therapy for children with trauma” and presented many real life case studies of how it had been practiced by the AMURT educational team in Chouf area.

Didi Ananda Uttama from Athens gave a fascinating workshop on “The importance of the primal period – from conception to the first year of life of an infant”. Based on the research that she has done for her forthcoming book on the subject, Didi’s presentation struck a chord with the mothers attending the workshop. 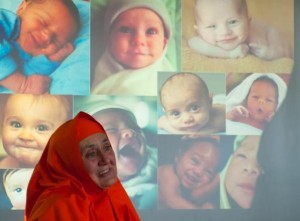 Didi Anandarama gave a workshop on “Mandala Art” and the groups prepared four collaborative mandalas. It brought out the positivity and colourful imagination of the participants. It also bound them together in an unimaginable way. The charm of this activity pulled the children who also joined in this aesthetic exercise. 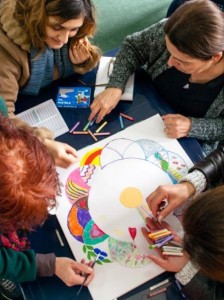 The neohumanist education movement around the world was shared through a powerpoint presentation by Didi Anandarama also. Finally, Ac. Shambhushivananda shared his insights on the challenges facing neohum anist teachers, parents and social activists, and guidelines given by Shrii P R Sarkar on building a new civilization based on inner and outer ecology.

The conference was spiced with traditional Lebanese delicacies, traditional bread made freshly for the participants and walks to the Cedar nature reserve. About 25 persons participated in almost every session and all the participants including the delegation from Syria also left with a renewed determination to establish neohumanist schools in the middle east. 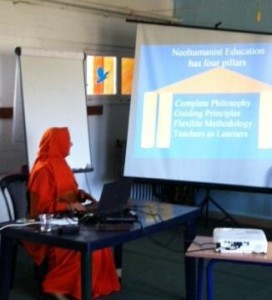 There was a cultural programs by local musicians and the entire event became a historic landmark in the development of neohumanist education in the Middle East. Special thanks were given to Dada Unmantrananda and Dada Subbudhyananda who had prepared the logistics for the event with meticulous detail.

Dada, Didi and Maniisha from Syria also visited Radha’s SMART Academy. Radha is one of the pioneers of bringing the neohumanist educational movement to Lebanon.