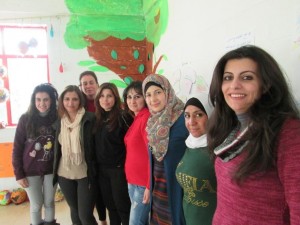 In less than a year, the AMURT/NHE Lebanon Child Friendly Space (CFS) project for refugee children from the Syrian civil war has progressed considerably. Though it started out in a space that used to be a warehouse that was renovated above the original headquarters of AMURT, it has since shifted to AlMahaba School a large school building owned by the Catholic Church in KfrNabrakh, with a spacious and well equipped sports field.

There has also been turnover in both teachers and children. Since the program began in April 2014, 310 children have benefitted from the CFS program. Currently, there are 50 new children integrating into the program. There are now 10 CFS facilitators, as well as an educational consultant and two psychologists involved in the psycho-social support program. Besides the CFS program, AMURT Lebanon also runs a Back to School support program which has given financial support to a total of 650 Syrian and Lebanese vulnerable students to cover school fees, transportation and educational materials. In February, they organized a Neohumanist Education training led by Didi Ananda Devapriya to offer holistic education tools to the new staff. 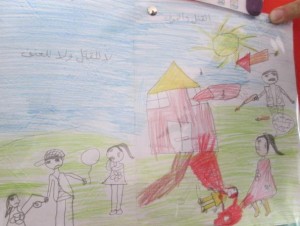 The training focused mostly on understanding how traumatic stress affects children and their behavior, as well as practical methods for assisting the children in integrating into the child friendly space. The CFS is conceived of as a temporary, intermediate step to help children that have either never been in, or have been excluded from the mainstream educational system because of their refugee status. It helps children “normalize” after so many experiences of disruption, stress and instability. It also gives them a safe space to learn how to express themselves, to receive emotional support and coaching, as well as to gain practical skills for school readiness. One of the most important elements of the CFS, however, is to have fun and play! 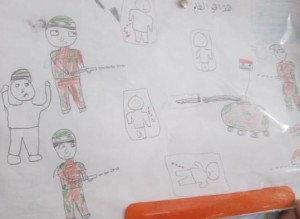 It was chilling to see the drawings on the walls of the therapy room made by some of the children. There were so many vivid drawings of soldiers with guns, bullets, blood and dead bodies. These children have seen unspeakable things. And yet, they are still children and need the same opportunities all children need to grow and develop and heal. 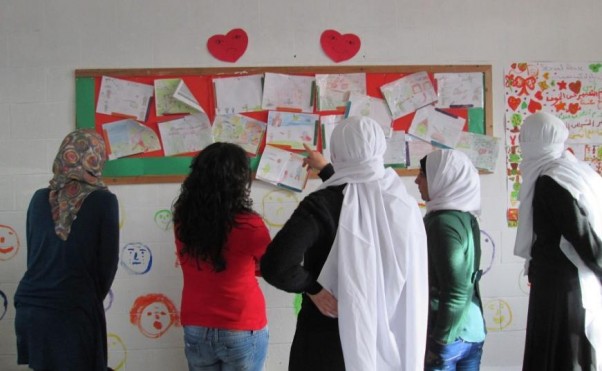 Didi Ananda Devapriya introduced yoga for children as a way to ground and learn to trigger relaxation responses to turn off the hyper vigilant stress system that traumatic situations leave constantly on alert. She also introduced story-massage, therapeutic story telling, persona dolls and lots of games. The group was particularly creative and invented many songs in Arabic, based on classic Neohumanist songs to use during quiet time, transitions, etc.

Since the training, the facilitators have introduced a morning “Circle of Love”, and use the songs that they created for the activities. They use story telling extensively and have already created several arabic persona dolls, which they plan to use to address sensitive issues around bullying and discrimination.

Here is a therapeutic story that Didi Ananda Devapriya wrote for the training and reflects, through metaphor, the experience of these children:

A tiny tomato seed was planted in the warm, dark earth inside of a safe greenhouse. Soon, a tiny green shoot had sprouted through the earth, and began reaching up towards the sunlight. It grew, and grew…And then one day, a shovel came, and roughly dug into the earth next to her and in one sudden lurching movement, the tomato seedling was dizzily free of its familiar bed of earth. A small chunk of earth clung to her tiny hair like roots. Several of the roots stung as they had been severed when the seedling had been torn from the ground.

The seedling was crowded into a tray with many other little plants. They could barely breathe. And then a motor hummed, and suddenly the earth was moving underneath then and rumbling and jostling. They fell over onto one another, some of their fragile leaves snapped off.

A long time passed, and the little seedling just waited, huddled together. Most mornings they received a brief shower of water from above. But a long time days passed without water…they were so thirsty. The little plants couldn’t keep growing towards the sun. They began to wilt..some of the leaves were turning yellow. They cried out for water – they wanted to grow again.

At last their cries were heard. A concerned voice “Oh – these plants need to get into the ground!!! Who left them here?”

The little seedling again found herself flying through the air, and then she was settled into a carefully prepared hole, already soaked with water. The half covered roots were then snugly covered up with earth. The little seedling was happy – but so exhausted that she just slumped over onto the earth. She didn’t even have the strength to stand up straight – especially with the rays of sun beating down as the sun rose high into the sky.

There were other tomato plants nearby – strong and tall. They seemed to be laughing at the sadly wilted newcomers. Already they had yellow flowers brightly decorating their branches -that would turn into red tomatoes in a few more weeks.

That night when the hot sun set behind the stony mountains, a cool moon rose in the sky and gently shone its healing light on the little tomato seedling . The moon told the seedling – you are safe now and can let your roots stretch into the ground again. I will send morning dew for you to drink and grow strong, and soon you will catch up with the other plants and you too will have beautiful yellow flowers and lovely juicy tomatoes!”

The next morning, it wasn’t easy and the little seedling had to struggle, but already she was standing up a bit straighter. The farmer came and planted a strong pole next to her and gently tied bits of string to her stems to support her to grow nice and tall. Though she was smaller than the others and had to work hard to grow, day by day the little plant was climbing higher and higher thanks to the pole. The farmer took extra care to give her steady showers of rain and a little bit of extra fertile black manure so she could catch up. Soon the tomato plant was doing what tomato plants do – stretching her leaves up to the sun and growing, growing, growing.

Before long – yellow buds unfurled on its branches. In a few more weeks, when the flowers had dried up, they left behind small, round, green knobs that began to swell every day. The green tomatoes warmed in the summer sunshine, and began blushing into red. The little tomato seedling had grown into a tall, strong tomato plant just like the other plants, and offered its juicy, sweet, red tomatoes to the farmer. 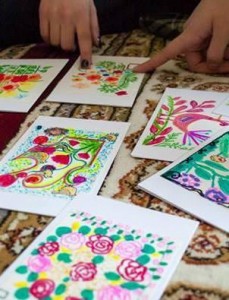 We had a two day teacher’s training at the Child Friendly Space project of AMURT in Chouf, Lebanon. Fifteen participants learned about storytelling that included elements of stories for different ages, writing your own story and helping children write their stories. We discussed applicable useful art activities that help to transform the learning environment into a creative and inspiring place. This includes landscaping around the school, making gardens, creating beauty spots, making art that can be used in the child’s home. We also discussed about how to illustrate children’s stories. The 15 participants received certificates.