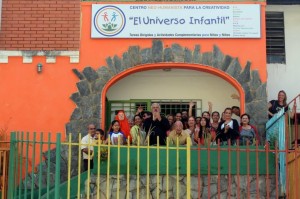 The Center for Neohumanist Creativity opened on April 6th in Caracas, Venezuela in the former preschool building which has now been extensively renovated. It operates under the auspices of the Women’s Welfare Development Foundation and was inaugurated on Women’s Day, March 8th. Didi Ananda Sadhana gave a talk on the importance of education for women and girls and the importance of coordinated cooperation between men and women in order to create a progressive and well functioning human society. 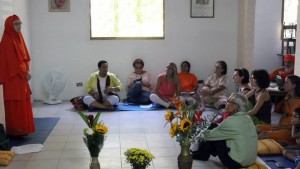 The center has a capacity to serve over 150 children aged between 3 and 12 years. Programs are offered for women as well as for the whole family. These programs include an afterschool program, classes in yoga, music, dance, art, origami and language instruction in English and Portuguese. Some workshops will be especially designed for women and girls to strengthen their knowledge and appreciation of the female gender and to help create self-esteem.

We already have teachers for the afterschool program and for the yoga classes for children. There are several teachers for music and dance classes, also an art teacher and an origami teacher who is doing spectacular pieces made of recycled paper. We also have two language teachers for English and Portuguese language. All teaching and administrative staff receive ongoing training in Neohumanist Education, Biopsychology, Meditation and Yoga.

During the NHE Conference which was held in Caracas in 2014 Dada Shambhushivananda gave a talk at the International School of Caracas, and since then they have continued to invite us to give talks and yoga classes to their students and teachers. Dada Maheshvarananda has gone there several times to give talks about spirituality and has also taught a yoga class for the teachers. Tracey, one of the teachers at the International School of Caracas, together with the coordinators of the social service programs of the school, organized a one day visit of the senior students of the school to help with the renovations on the CNHC building. They and some of their teachers helped us paint a lot of the rooms and the outside murals and they promised to come again to help us paint the iron fence surrounding the building. Sarvajiit and Diipanii are coordinating the repair work and many other local members of Ananda Marga are assisting. We changed the windows, fixed the electrical installation, and are redoing the garden, etc.

There is still a lot of work to be done to make the Neohumanist Center for Creativity a successful project. We are charging very low fees in order to attract as many children and families as possible. We need long term volunteers with educational and administrative background preferably with knowledge of the Spanish language who can help to coordinate the project.

For several years now Venezuela is passing through a lot of changes and lately also through many hardships on the economic level. But it is undoubtedly a country with immense potential, both because of its climate and natural resources and especially because of its human potential. There is a huge number of young people who need a progressive, benevolent education system based on neohumanistic values in order to bring out the best in them. 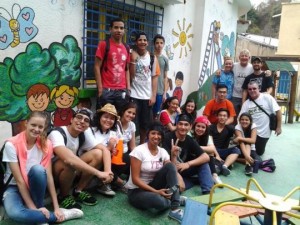 Student Volunteers who helped paint the
classroom and murals.